SHOW AND TELL: Show Off Your Home Game-Watching Experience

It's HUMP DAYYYYY and we're one day closer to watching the games that count. Let's kill a little time with some show and tell, shall we?

Share All sharing options for: SHOW AND TELL: Show Off Your Home Game-Watching Experience

Got a magnificent man cave you want to share? How about a flower print recliner circa 1992 you just can't seem to get rid of? Home theater? Rabbit ears over your TV?

We wanna see it. Show us your game-watching set up. Here's mine: 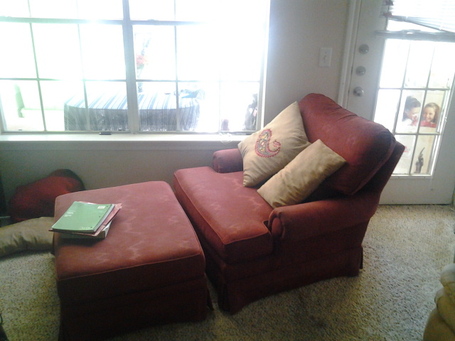 Are you not amazed? Does the first floor view of the parking lot take your breath away? It should because cars emit carbon monoxide and carbon monoxide kills. Get your CO detectors checked every 6 months!

Here are some other things to show you: 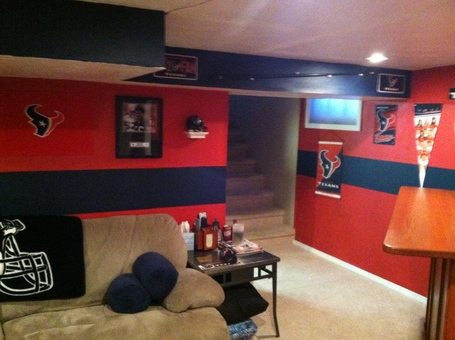 From the user "amazing80" from TexansTalk.com. Click the link if you want to see more. Fantastic set up. 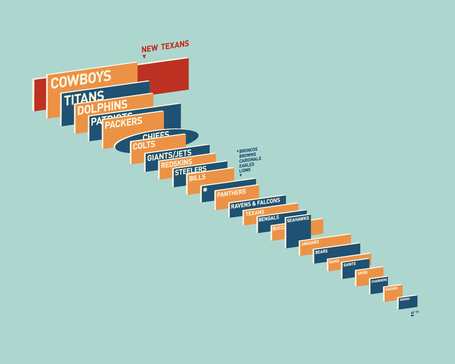 An amazing infographic that circulated around the internet late last year. It's certainly worth sharing again.

Remember when the Lions pulled off a miraculous 24-point comeback versus the Cowboys back in 2011 thanks, in large part, to Tony Romo's embarrassing 4th quarter meltdown? Thanks to my girlfriend's awesome father, I was there in Cowboys Stadium when it happened... watching Romo crush the soul of every Cowboys fan in the building was glorious in super hi-def. But those monster screens were just too distracting right in the middle of the field. It felt like I was in some grandiose, over-priced movie theater with Gigli on the screen instead of an actual football game.

Hopefully Reliant's new screens, featuring one over each endzone, will be more complimentary to the in-game experience instead of dominating it... like a nice, bold cabernet paired with a perfectly marbled ribeye.

The NFL is fighting a battle every game day against itself. From 2007 to 2011, the average attendance around the league has dropped from 67,755 to 64,698. The exponential increase in at-home technology has allowed fans to watch games in crystal clear high definition and booming digital audio-- all from the best seat in the house, like mine above.

Tim's topic yesterday regarding the new screens spurred some great discussion, and Capt Ron's comment is definitely worth sharing in case some readers missed it:

This will be my first season with the Texans without my previously coveted PSLs and Season Tickets.

As much as I was proud of never missing a home game in their history, the stadium experience really just didn’t live up to my expectations for the cost. I’ll most likely still buy tickets to a game here and there, but the whole experience of PSL and Season Ticket ownership was more negative than positive (regardless of the Team’s performance). Here are a few reasons why:

- The annual payment for the season tickets is due in the spring. They get to benefit from "interest float" on this money instead of you.

- The food and beverage costs are ludicrous even for a professional sporting event.

- The so called amenities for the Club Sections were minimal. Carpeted areas, furniture that is usually over crowded, packed bars that can’t supply drinks efficiently, slightly above average food options, etc.

- Visiting fans (Cowboys, Titans mostly) who were so rude and obnoxious that you would have to leave the stadium to avoid losing your temper and getting into a fight.

- The traffic getting to and from the stadium was horrible. They really struggled to figure out how to efficiently move the bottlenecks in the parking lots and surrounding streets.

- The game experience at your own home (or local sports bar) with a good sized flat screen and sound system brings a TON more to enjoying the Texans. You get close up HD broadcast, replays, commentary, updates throughout the game, and can invite friends over to enjoy it together.

- The cost of attending EVERY home game was just not worth it. Our tickets were $3,500 a season for two seats for eight games, and then we’d have a food/bar bill of around $200 per game on average, or $1,600 per season. That’s $5,100 a year just for regular season attendance. Playoff tickets are required to be paid, and you have to pay in advance (with about three weeks notice) for two home games just in case they end up playing at home twice in the playoffs. Those were $1,200 for two seats for two games. So in the last two seasons, I’ve shelled out about $12,600 for two seats at Reliant. I could have used that money toward an outdoor living space to tailgate in style and feed an army of friends!

So after evaluating our budget and the "bang for the buck" comparisons, we opted to sell our PSLs. I’m now in the process of budgeting and designing an outdoor kitchen and entertainment area, which will certainly get used for Texans games this fall.

Lots of great points here, and I'm curious to hear what other season ticket holders think about it. I've never been nor shall I ever be a season ticket holder due to the price (not to mention the 19,000-strong waiting list), but I've had some great memories watching the game live.

Share your pictures and thoughts below and have a happy Wednesday.