You might as well hear it from us before you hear it from some stranger on the Internet: A suspension for Texans defensive end Antonio Smith is likely. But how many games will he miss? And when?

Share All sharing options for: Report: Antonio Smith Likely To Be Suspended

Battle Red Blog's D_more55 sent the staff this picture from his phone alerting us of some startling news:

His phone is dangerously low on battery.  Check it out... 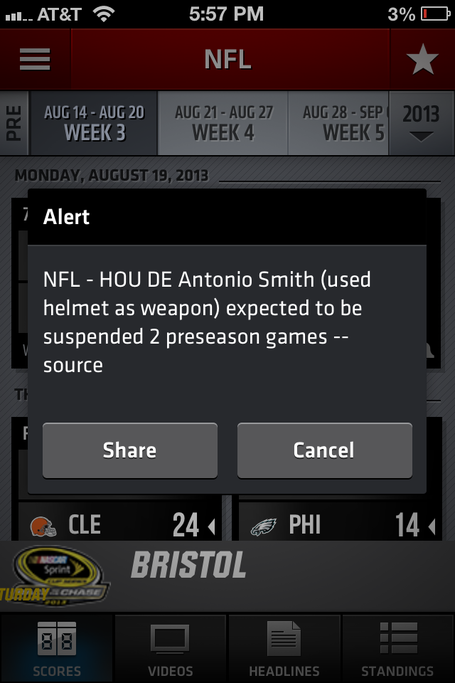 In unrelated news, reports are coming in that the NFL is investigating the incident we've all been talking about the last couple of days. In case you missed it, Antonio Smith ripped off Richie Incognito's helmet and seemingly swung it at his face like a weapon.  Check out the GIFs and analysis by Brett Kollmann here.

No matter what you may think of Richie Incognito's style of play and tactics, there's no way anyone should justify Smith swinging that helmet at his face. Cortland Finnegan getting his due from Andre Johnson is one thing, but Incognito possibly getting his faced smashed with a helmet is a completely different thing. No more comparisons should be made between those two incidents.