The all-important granddaddy of all preseason games is this Sunday. WEEK THREE. The Texans square off against the New Orleans Saints, who will surely test the Bulls on Parade early and often. Here are a few things I'll be looking at on game day.

Share All sharing options for: Houston Texans 2013 Preseason: What To Watch In Week 3 (Saints v. Texans)

Drew Brees taking snaps makes the Saints' receiving corps inherently dangerous. He sports accuracy and touch that few quarterbacks can match. As good as the Texans defense was in 2011, Brees and the Saints torched their secondary to the tune of 370 yards in their Week 4 match-up.

Lance Moore had a particularly good game against Kareem Jackson, with nine catches on nine targets for 88 yards and a TD. You better believe Brees will be eager to try and exploit that match-up again.

Johnathan Joseph is looking to bounce back after giving up quite a few plays last week versus the Dolphins, including a deep bomb down the sideline to Mike Wallace. Joseph needs to play airtight coverage to slow down the Saints' passing attack.  J-Jo needs to start proving that 2012 was just a "down" year and that he's still one of the top cornerbacks in the league. Playing well this Sunday is a great first step towards doing so.

Who will step up against Jimmy Graham?

If the Texans send five rushers, as they are wont to do, this will likely leave the responsibility of covering stud tight end Jimmy Graham to either Danieal Manning or.... [dramatic thunderclap] Shiloh Keo. Consider me worried.

Of course I'd be worried even if we had Ed Reed in his prime back there.  The Texans will certainly be looking for ways to limit Graham's production this Sunday. We'll see how it goes.

Graham caught four balls for 100 yards against the Texans back in 2011.

Who will be able to keep up with Darren Sproles?

Imagine the Saints go to a 4 WR set with Sproles standing next to Brees in the shotgun.  Who in the world will have the unenviable task of running down the speedy running back in coverage? Brian Cushing is a likely candidate if our two safeties are in a Cover 2 look.

What about a dime safety playing in the box next to Cushing?  D.J. Swearinger could see time there. He'll need every bit of quickness he can muster to keep up, not to mention sure tackling. *Ahem*

If you're wondering, Sproles caught six balls for 50 yards against the Texans in 2011. He also added 35 yards running and a score. 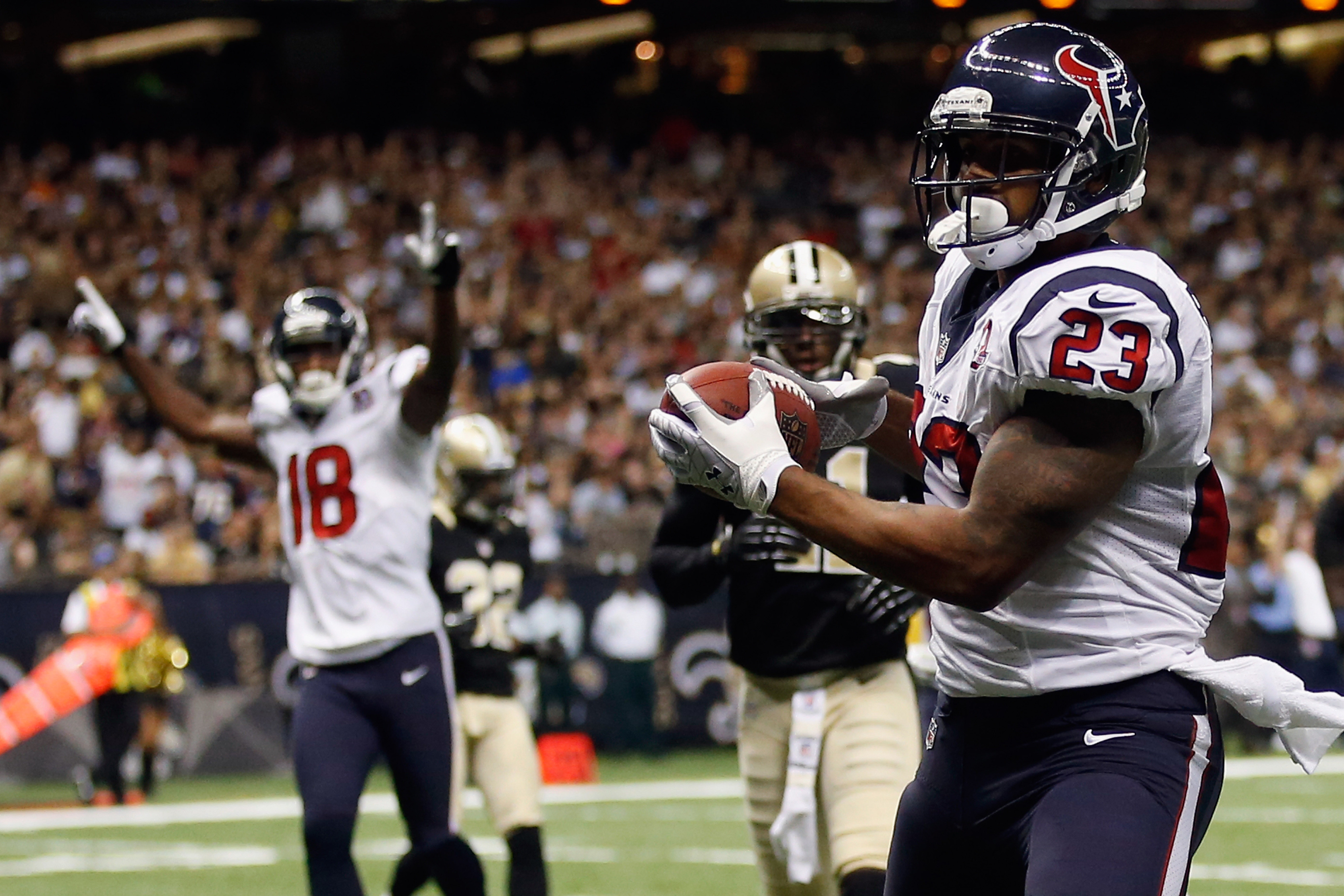 Keshawn Martin and Lestar Jean in a possible shootout.

Last year, when Matt Schaub dropped back for a pass, there was a fairly good chance it was going to Andre Johnson or Owen Daniels. That's about it, but dadgummit it doesn't have to be that way.

Wouldn't it be nice if Schaub had a plethora of targets to choose from? With DeAndre Hopkins out with a concussion, Keshawn Martin and Lestar Jean have a chance to prove that can be they can be those targets in a game like this-- high scoring, fast paced and vertical.

Even last year's preseason tilt versus the Saints yielded over 60 points between the two teams. In this "dress rehearsal" type of game, Martin and Jean have a real chance to earn Schaub's trust-- which could certainly come in handy with teams like Seattle, San Francisco and New England on the schedule.

These are just my thoughts on the most interesting bits to look at. Let us here yours in the Comments. Week 3 should be an entertaining game before the drudgery of Week 4, so let's enjoy it.