The NFL's 27th greatest trophy, the prestigious Governor's Cup, won't be up for grabs, but there's still much at stake for tonight's showdown between the Houston Texans and Dallas Cowboys. Find out what to watch here.

Share All sharing options for: Houston Texans Preseason: What To Watch In Week 4 (Texans v. Cowboys)

It all comes down to this - Keenum v. Yates.

Remember a few years ago when Rex Grossman said "F*** it, I'm going deep!" and stole the backup QB spot right from under Dan Orlovsky? I do; it happened in the fourth preseason game against Tampa Bay back in 2009. Thankfully, those two are long gone from the Texans' roster and the backup role will be in much better hands. But will it be T.J. Yates or Case Keenum as the primary backup? Take a look at their numbers through three preseason games:

Of course, these preseason stats must be taken with mouthfuls of salt, but it is encouraging to see the pair play well. My guess is that Kubiak will defer to the veteran and award the job to Yates unless something spectacular happens tonight. We'll see.

Just seeing DeVier Posey back on the field will be pretty nice to watch. Posey tore his Achilles so late in the year that not many people expected to see him this early in the season. Hopefully he'll get some passes thrown his way so we can take a look at his cuts and ball skills.

Show us something, Sam... anything.

Former LSU defensive end Sam Montgomery is behind undrafted rookie Willie Jefferson on the OLB depth chart thanks to some conditioning issues and nagging injuries. Montgomery has yet to make any noise in the preseason, but I'm thinking he'll get plenty of minutes tonight against the Cowboys.

It's Week 4 of the preseason; hopefully by the third quarter, the cameramen will get bored and find something a bit more interesting to look at. 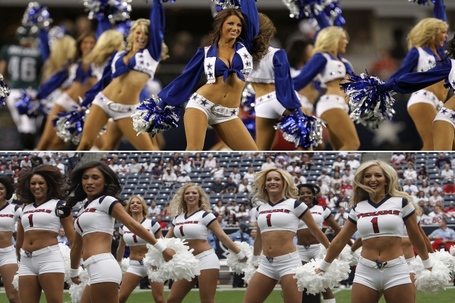 Let me hear you'll be looking for in the Comments. Stick with Battle Red Blog as we wrap up the preseason and look ahead to the regular season! Also, no more Joel Meyers and Spencer Tillman!