Back to Gary Kubiak and the mighty Logistic Regression. Take a look inside the Texans' defensive numbers and see exactly what kind of impact Wade Phillips has had on the Texans and Kubes.

If you missed Part I of this series, click here.

These past couple of weeks I have been MIA. I was lucky enough to visit one of the natural wonders of the world, the Grand Canyon, and go on a road trip throughout the Midwest of the United States. The last time I was at the Grand Canyon was for Spring Break two years ago; I hiked down to Skeleton Point on one day and down to Plateau Point on the next, but I ached to return and camp down by the murky Colorado River. So my crappy 14 year old brother, who is as worthless as every other 14 year old on the planet, and I loaded up my car with backpacks and other camping paraphernalia to fulfill this goal. After being the only driver for 1,200 miles of highway along I-10, U.S 385, and I-40, we were back to the place I was longing for.

About five million people visit the park every year, but only about 1% of the visiting population actually travels down into the canyon to camp. I highly suggest going (or going back) if you have not been and join the 1%. When you see the canyon from the rim, you are able to see the colors and overwhelming immensity of the canyon. However, you have no idea how colossal it really is until you look at it from a mile below and see the billion year old rocks climbing toward the rays of light emitted by the sun. You also learn how important water is to the area, as every creek and water fall is covered in luscious green. The hike out is 7-9 hours, but is not too strenuous if you take plenty of breaks and stop to drink water and snarf down trail mix. If you are not up for hiking down and back out, you can hop on a mule to take you there or go on a river trip that takes you out by helicopter. Don't be perturbed. Find some vacation time go down into the canyon as soon as you get the chance.

The week after that, I drove all around the Midwest with friends and explored Memphis, the Smoky Mountains, Nashville, Chicago, Kansas City, and Dallas until I arrived back in the Hill Country.

Since I have been back home, I have been recuperating from the miles of hiking, driving, eating, drinking and sleeping in grimy Howard Johnson Motels and America's Best Value Inns by scrolling through Kubiak's games and tediously adding the defensive numbers to the model. I know all of you spent the last couple of weeks refreshing BRB and waiting for the entrance of defensive data. This time I won't go into too much depth about the process/hypothesis tests/coefficients and will mainly discuss the results. However, If you would like to read more about the process, check out Part One here. As a heads up, there is a slight difference in the offensive model's overall record in Part I compared to Part II due to some small mistakes I found. 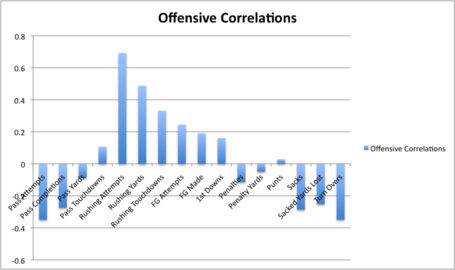 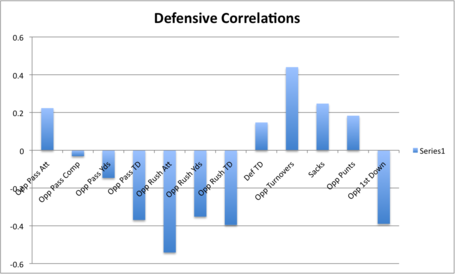 The R Output is below for those who are interested.

(Dispersion parameter for binomial family taken to be 1)

To sum it up, the offensive model is a better statistical model. This is mostly due to the fluctuations and lack of consistency the defense has had during Kubiak's reign of terror. Richard Smith, Frank Bush, Wade Phillips, revolving doors in the secondary, soft defenses, draft busts, one of the worst pass defenses of all time and All-Pro players have all made homes in a defense that has changed considerably for the better these past two seasons. On the filp side, the offense has been fairly stable, as stagnant as an open, neglected cooler filled with rain water that has turned into a mosquito breeding ground. It all depends on your outlook.

The only reason I can think of is derived from common sense. Let's assume you have no idea what the offense did for a Texans game, and I only gave you the defensive numbers. If the Texans gave up 28 points, you would probably give them a low chance of winning. If they held the other team to 17 points, the win probability you would come up with would probably triple. However, the offense consistently scores 17-30 points a game, and if I told you they scored 17 or 28 points, you would be in a sort of purgatory when making a prediction. You would expect them to win, but would not give come up with as high of a probability as if I told you Houston's defense only gave up 14 points.

The same example can be seen in the sport of baseball. You would give a higher probability of winning to a team that only gave up two runs compared to a team that scored five runs in a different game that same afternoon.

After coming up with this idea and the defensive model outperforming the offensive one, I think defensive numbers might actually be better at predicting outcomes than offensive numbers. I don't know that for sure, and more work and research would be needed, probably by looking at teams other than the Houston Texans.

Also in the Google Doc, I compared the difference between the offensive and defensive probabilities. I took the difference between the two and made a note when one predicted a different outcome than the other. What is fairly amazing from it is how well Houston has played on both sides of the ball since Wade Phillips came to town. Game 81 was his first season leading the Texans' D. Since then, only four times have the offensive and defensive sides of the ball had a large difference in performance. It only happened once last year; it was the Jacksonville game in Houston. This can be troublesome at times, because whenever they have been beat these past two years, it's because of an all-around awful performance. There are some games, like the ones against Minnesota and Green Bay, where they came out flat, unprepared, and the idea of winning left everyone's consciousness after the first quarter.

Here's a nifty graph showing the team's balance since Wade put on the headset. 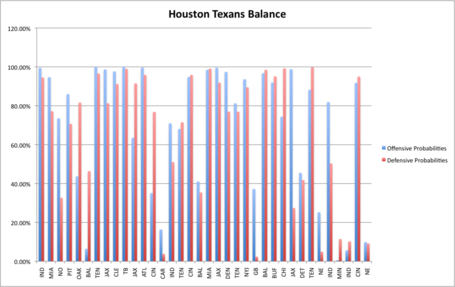 Whenever there is a large difference between the two, Houston is 13-9, which is a decent record. However, most of the games where there large differences in probabilities came at the beginning of Kubiak's head coaching career. Since their turnaround season in 2011, they have only played four games where there was a large discrepancy between offensive and defensive performance. The games include wins against Cincinnati (Offense 76.5%/Defense 35.1%) and Jacksonville last year (Offense 98.83%/Defense 27.42%) and in 2011, when they lost to New Orleans (Offense 75%/Defense 33%) and Oakland in the Al Davis Wake game (Offense 82%/Defense 44%).

In the last article, some of the comments made points regarding Wade Phillips as Gary Kubiak's savior. So I looked at the change in per game averages the past two years. The table below outlines the differences B.W.P. (Before Wade Phillips) and A.W.P. (After Wade Phillips).

Obviously, Philllips is not the sole reason the Houston D has seen an increased performance. The team added Johnathan Joseph, Danieal Manning, and J.J. Watt, and they benefited from the general increase in performance by younger players as well. But the job Wade has done is quite remarkable when you look at his body of work here. The scary part is that this defense should be even better this year than it was last year, depending on how healthy the team is.

This is the best one I have made. It is not just all three of the models combined into a one eyed, two headed, three titted monstrosity. One of the goals strived for when creating a model is to make it as simple as possible while maximizing its ability to explain the dependent variable. Football is a complicated game, so consequentially there are more variables than I anticipated adding, but I added the minimum needed based on the results. The variables included are rush attempts, rush yards, rush touchdowns, opponent rush yards, opponent turnovers (turnovers forced), opponent first downs, field goal attempts, pass touchdowns, opponent return yards, pass completions and the model is as following.

The R Output is:

(Dispersion parameter for binomial family taken to be 1)

I know I said there would be no talk about hypothesis tests, but I need to in this case. Earlier I mentioned the surprising number of variables I needed to add and Hypothesis Test #2 deals with the complexity of the model.

Ho: Complicating the model does not increase the explainability of the dependent variable.

Ha: Complicating the model does increase the explainability of the dependent variable.

So at an alpha level of .10, one would reject the null hypothesis because the p value of 0 is less than the alpha of .10, and adding more variables to the model would still be warranted depending on the residual deviance. Really I believe I can add every variable in the world that involves a NFL game and still the hypothesis test will turn out the same. Hundreds of different measurable and unmeasurable variables, 50 different players working together and against each other ,and components like chemistry all have an immense impact on the game. This complexity and ambiguity is the main reason why advanced stats is often lacking in the NFL compared to MLB and the NBA. Someday, when I have gained enough of my soul back after having it split into different Horcruxes during this process, I will add other variables like yards per punt, time of possession, and 3rd down numbers. Even then, it still probably will not be enough data to cover everything.

When using the model made combining the offensive, defensive and a few special teams stats, it performed better than when looking at just the offense or defensive side of the ball. The model went 102-14 when predicting past games, which is the same as the defensive model. However, the probabilities are more accurate and better depict what happened in the game because it uses a combination of the three sides of the ball. Put your glasses on because this chart is not the easiest on the eyes; it depicts how the total probability of winning has changed over time. The best way to read the chart is to pay attention to the longevity of the peaks and troughs instead of just seeing how the line zig-zags. The majority of the pertinent data will be found in the Google document provided in the earlier link. 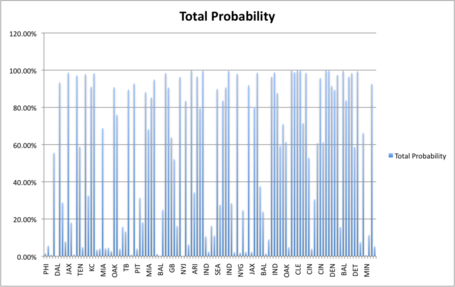 From this work, there are multiple aspects to learn about how the Houston Texans have operated under Gary Kubiak. The consistency of the offense, the transformation of the defense, the realization of how complex the game of football really is are all there. The real fun will be once the season starts and we can see if this project has any merit whatsoever. What's the point of attempting to mimic reality and make projections if there is nothing to test it against?

Here's a link to Houston's stats under Gary Kubiak I charted. Holler at me if you find anything interesting.