Houston Texans Newswire: Nobody Cared Who I Was Until I Put On The Brace

J.J. Watt talks equipment, T.J. Yates talks golf, the Green Bay Packers are coming and going, and more in this edition of the Newswire.

Share All sharing options for: Houston Texans Newswire: Nobody Cared Who I Was Until I Put On The Brace

Hey, guys and gals, did you know that one of the biggest questions surrounding the Texans is their quarterback play? (Dora The Explorer Pause) You did?! Well, read this story anyways about the pressure on Matt Schaub to perform this season.

All-Time cornerbacking great Deion Sanders checked in on the Texans camp for NFL Network on Monday. He talked with both Ed Reed and Andre Johnson about the upcoming season. In between his two interviews, ‘Prime' had an impromptu coaching session with the Texans' defensive backs. He talked about being a ball hawk, studying tape, draining Ed Reed of knowledge, and hand technique. I'm sure everyone will love this next part. Sanders said of Shiloh Keo, "That's my dog." Just what we need, more Keo talk.

Yes, we are talking about J.J. Watt's brace. He originally hoped to shed the brace this season, but his elbow soreness returned. Watt will wear the brace "as kind of a security measure." This is just an excuse for me to make another Batman reference and a Texans meme. 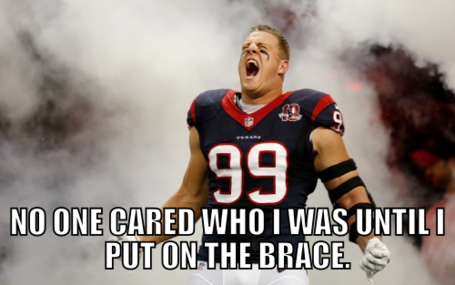 Tiger Woods won the Bridgestone Invational for the eighth time, seven strokes ahead of Keegan Bradley and Henrik Stenson. Thus prompting T.J. Yates to pose a question to the Texans locker room and Twitter--who is golf's greatest of all time?

Help us solve a locker room debate... Best golfer of all of time... Tiger or Jack?? #golfsgoat

Down Go The Pack.

Now two key pieces of the Packers' offensive juggernaut have been sidelined. Green Bay left tackle Bryan Bulaga appears to have torn an ACL. With Bulaga possibly out for the season, Marshall Newhouse will slide back to his 2012 position of left tackle. To make matters worse, today Jordy Nelson injured a knee today in practice and will be out at least until the start of the regular season.

Start the search for Cheesecake Factories around Green Bay, Wisconsin. Vince Young signed a one-year contract with Green Bay Packers. The drought is over for Young after burning bridges in Tennessee, Buffalo, and Philadelphia. He'll get one last shot in frozen tundra; I'm sure the Texas boy will enjoy that. At least his tax collectors will.

E.J. Manuel appears to be ripping the Buffalo starting quarterback job away from Kevin Kolb. Manuel was 9-of-17 with 113 yards, two touchdowns and two interceptions in a recent team scrimmage. Manuel has more time to take the job with Kolb on the shelf after injuring himself on a wet rubber mat.

From all indications in the desert, Tyrann Mathieu will be a steal for the Cardinals. Mathieu has impressed Cards' starting quarterback Carson Palmer -

"Tyrann is getting his hands on a lot of balls," quarterback Carson Palmer said recently. "He's so quick and explosive in and out of breaks and reading concepts and knowing coverages and weaknesses in where we're trying to throw the ball."

First, the good. The league is hoping to get suspensions of players convicted of drinking while driving. I applaud the league for this measure, especially when players have so many resources at their disposal to make better decisions.

Now for the bad. The NFL wants to crack down further on touchdown celebrations. Refs have warned players during Training Camp to not spin the ball after touchdowns. The "No Fun League" is back. Frankly, I have no problems with creative celebrations. Lines can be easily drawn against props and actions directly toward the opposing sideline.