Enjoy the brilliance of the controlled chaos that is NFL football in stunning, hi-res photos. See what was captured during the Texans' win over the Chargers on Monday Night Football last night.

Share All sharing options for: This Week In Photos - Texans v. Chargers 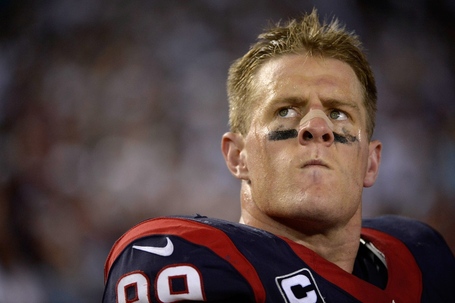 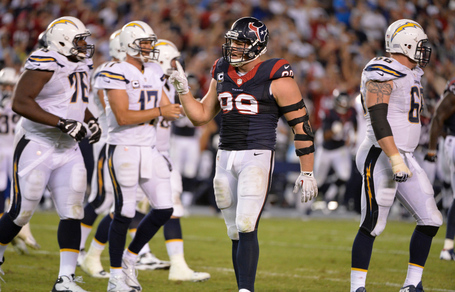 Justin James Watt was not a happy man during most of the first half, but he made his presence known in the second half with a deflected pass on third down. He finished the game with three tackles and the aforementioned swatted pass. 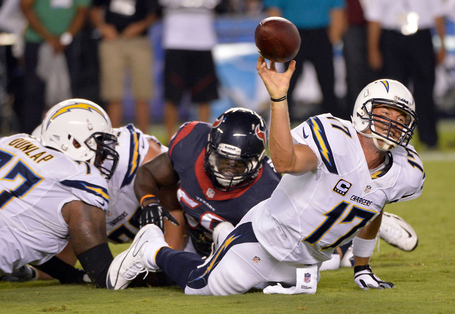 Whitney Mercilus arrived on the scene early in the game with this sack of Philip Rivers. Mercilus also caused the pressure that lead to Brian Cushing's outstanding interception and touchdown return. More of this please, Merc. 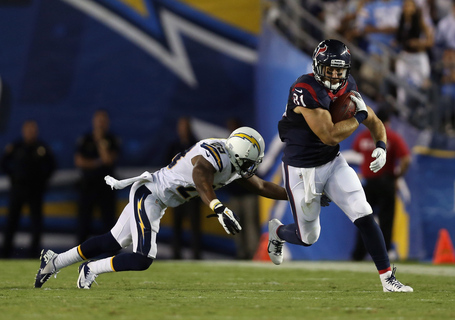 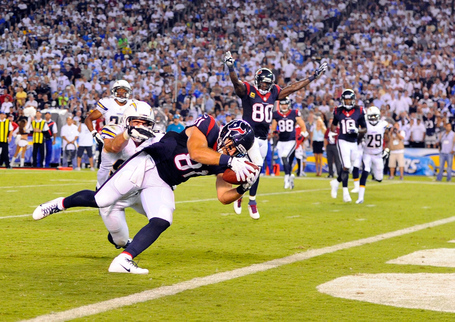 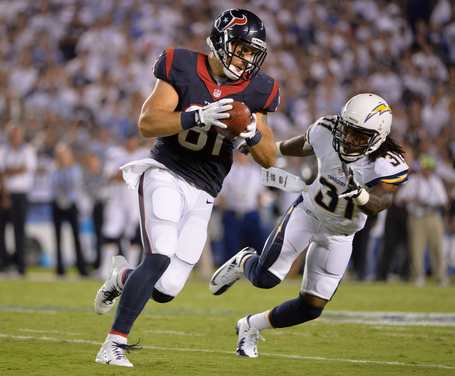 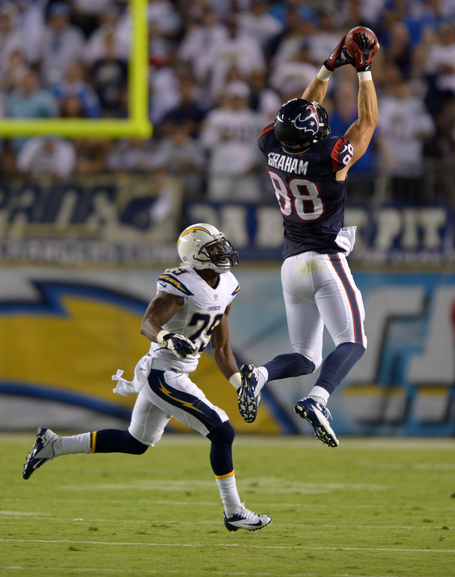 Brother Badgers Owen Daniels and Garrett Graham were instrumental in the Texans' come-from-behind victory. Daniels finished the game with five catches for 67 yards and two scores. Graham totaled four catches, 27 yards and a score of his own. 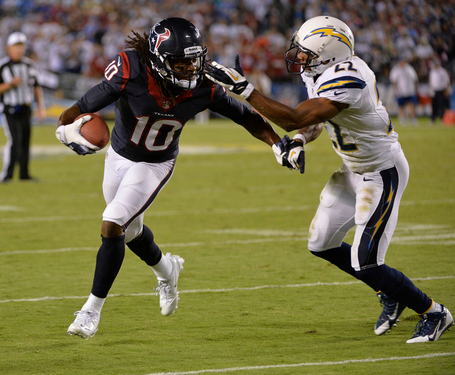 Rookie wide receiver DeAndre Hopkins impressed in his regular season debut for the Texans. He finished the game with five catches and 66 yards, including a beautiful shoe-string catch to convert a critical third down. 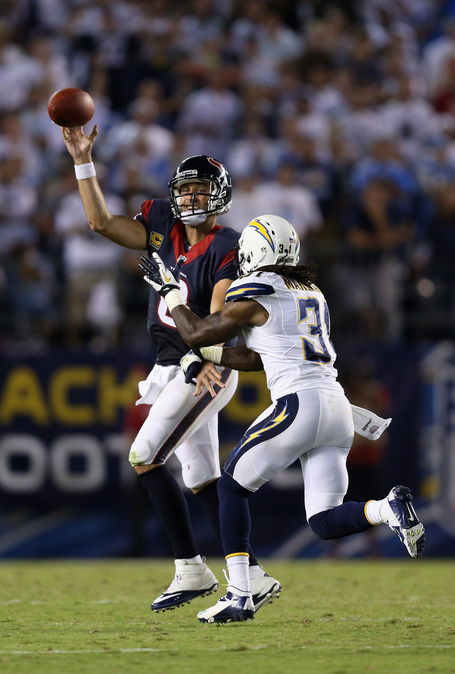 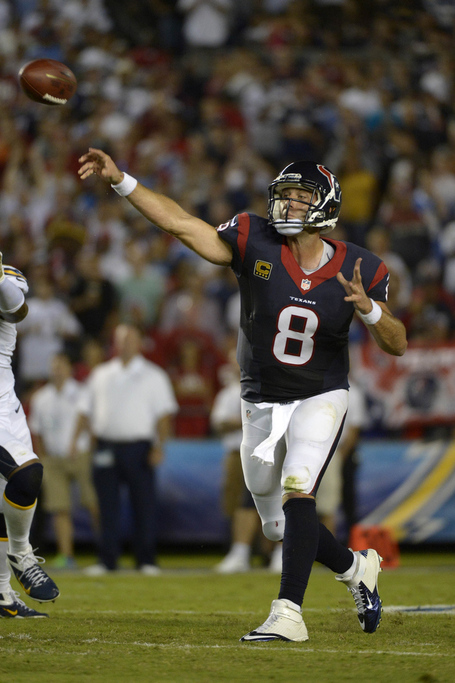 Game manager or field general? Matt Schaub was the latter last night, leading his troops to the biggest comeback victory in Texans history. Schaub has never looked nimble, but he was often able to escape pressure while keeping his eyes up the field and making accurate throws.

He finished the game with 110.0 QB rating, three touchdowns, and 346 yards on 34 of 45 passing. Schaub was nearly flawless the entire game, even with the unlucky tipped pass for an interception that started the game. 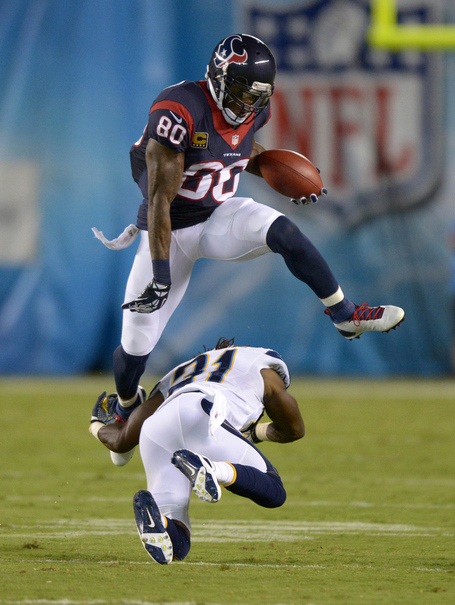 What can be said about The Great One? Andre Johnson helped carry the team to victory with his 12 catch/146 yard performance against the Chargers' hapless secondary. Johnson also broke the record for most career 10 catch games in NFL history. Canton bound? I think so. 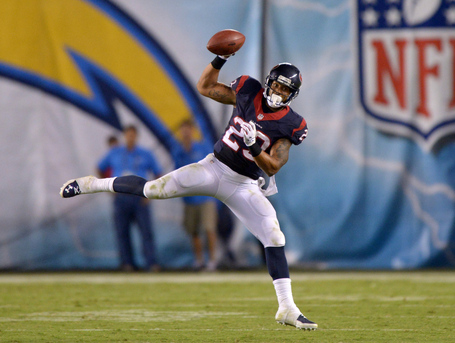 Arian Foster had a quiet game with 57 yards on 18 carries. He was active in the passing game as well with six catches for 33 yards. This one-handed catch pictured above was impressive but only went for one yard. Go figure. 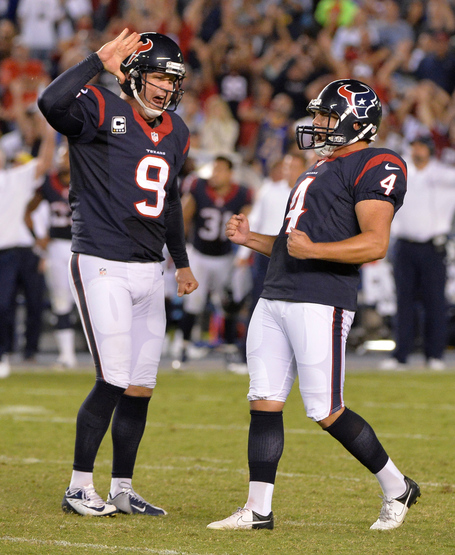 That's pure euphoria on the face of Randy Bullock as the game-winning kick sails through the uprights. The technically second-year pro saw an earlier 51-yard attempt sail wide to the left, but he nailed this last second 41-yarder with authority. Paired with Shane Lechler, the kicking game looks like it will be a strength moving forward. 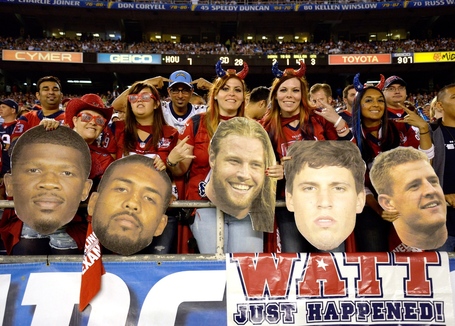 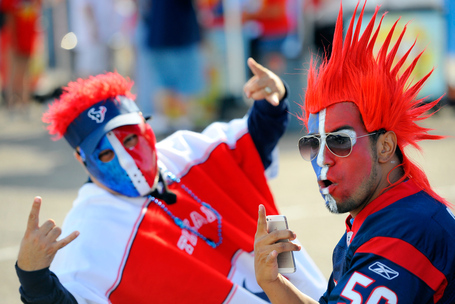 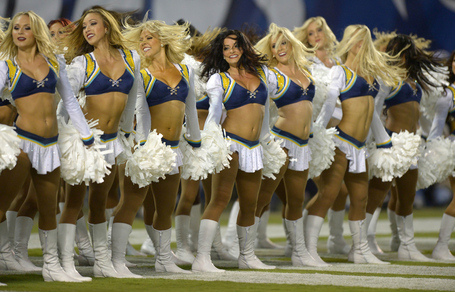