There's a lesson in Ed Reed for everybody.

What does Ed Reed mean to you?

If you were on this blog in the offseason, you probably know that I considered dumping Glover Quin for Ed Reed a mistake, mostly because Reed is a fossil with a recent history of injuries, but also because I didn't think he'd be that good. Unsteadying safety just because Reed is probably going to the Hall of Fame one day -- and not at all playing near that level anymore -- seemed like an asinine thing to me.

Yet every time we run a poll on Twitter about the signing, or when we think he'll actually get on the field, I'm overwhelmed by how the general consensus seems to be "well, we only need him for a few games!" "get him ready for the playoffs!" and so forth. The guarded optimism contained within those statements is refreshing for someone like me. Sure, Ed Reed may barely be able to walk, but somehow he's going to lure Tom Brady or Peyton Manning into three interceptions because Ed Reed turns your passing game into a fear-based passing game. Or something like that.

I find that reasoning a lot like the idea that the Texans have spent $15 million on a rock that keeps elite quarterbacks away. And Philip Rivers just threw four touchdowns on them and he's not even good anymore.

I do kind of like that fans rally behind the notion that Reed can save us all. It's like he represents the little pang of hope inside us all that this year will be different. That sure, not much of the equation has changed, but Ed Reed! It's fun to believe in things like Ed Reed. 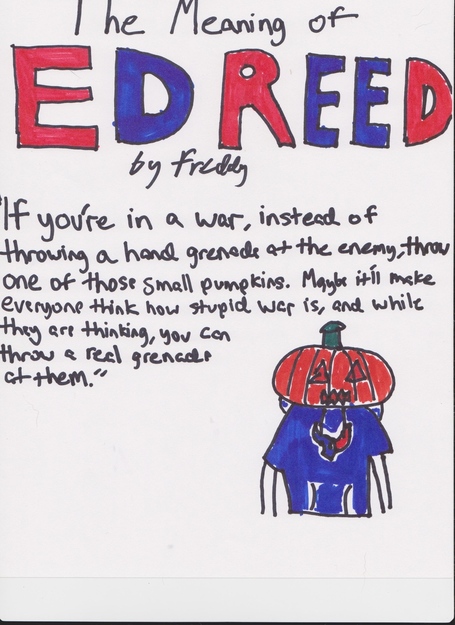