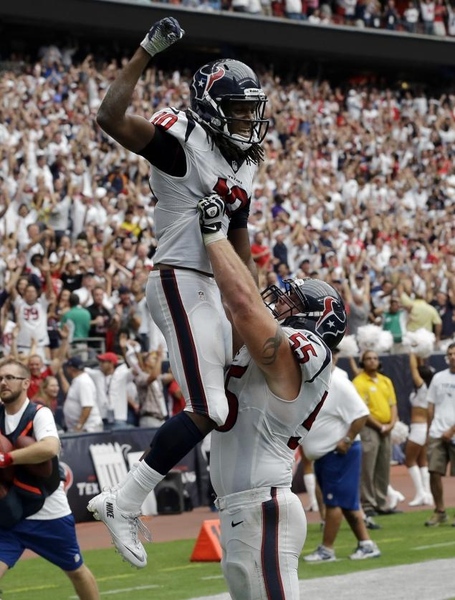 I really wrestled with the name of this week's Captain's Log. If Randy Bullock had made that kick to win game two, it would have been "Redemption" to address his first two misses earlier in the game. Given the double "icing" time outs called by the Titans on Bullock, and the halftime entertainment of Vanilla Ice, I had strongly considered "Ice Ice Baby". We won though, and I don't want to get wrapped up in the negative narrative. Let other writers and blogs do that. Then I thought of "NUK NUK Baby" as a variant focused on the win, but I settled on something far more meaningful for our rookie wide receiver rising star and the latest weapon in the arsenal at the disposal of Matt Schaub.

I took literary latitude to ink the title of this week's installment to highlight the significant breakthrough performance of WR DeAndre Hopkins, whose nickname is "NUK" from his early childhood. He was most definitely a weapon of mass destruction against the Titans this week with a beautiful fatal blow winning touchdown reception. It was also one of many incredible passes by QB Matt Schaub and a strong indication that Matt trusts his newest target.

This has been a nerve wracking first two weeks of the regular season for certain, but stay with me through this thread and I'll show you why you should not be climbing out on any ledges in concern for this season just yet. Most notably, the Bulls on Parade, and the NFL's best punter, are keeping the Texans in position to recover while we get the offense dialed in and rolling more consistently through entire games. Considering how the Texans came out like world beaters last year and then imploded at the end, perhaps we are seeing the reverse this year. Remember those seasons in the past when the Texans would find ways to lose close games? They now hold their poise and find ways to win close ones, which is still very hard to do in the NFL.

As for the whole issue around the kicker, I'll save that for a focused thread that I'm sure someone will do. I may do a write up on it if time allows, but the fact is that you have a first year kicker who was asked to win with his foot in his first NFL game, which was on the road (and he did), followed by three kicks beyond 50 yards in his second game, including the pressure of winning at the end again. Before we chuck this young kid to the curb, we need to place more pressure on our well equipped offense to perform better to not be in that situation in the first place. 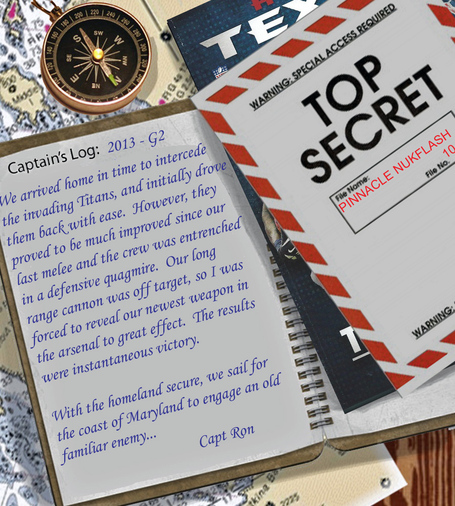 "I'm a doctor dammit, not some ridiculous mythology professor. What the hell is a Titan anyway?!!!"

The answer to this rhetorical question from our chief medical officer can be found here: The Story of BESF.

OUT vs. Titans WEEK 2

The "Bamboozled" meter ticks a notch higher for yet another week, although "coach speak" indicates Ed was "very very close" yesterday. We'll continue to follow this closely all week going into Reed's former home port in Baltimore.

The Circle of Trust 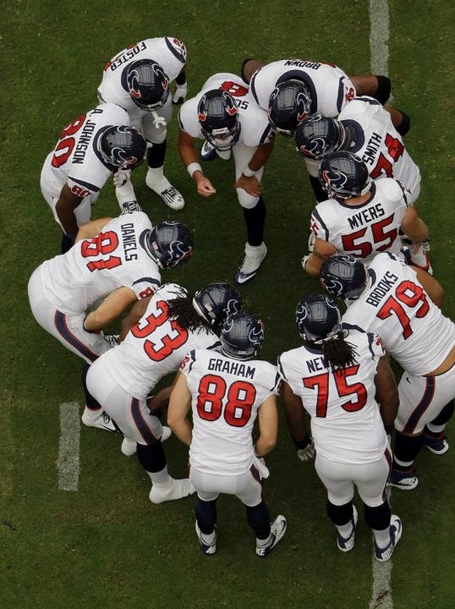 If he keeps this up. he would project to: 96 receptions, 1,464 yards, 8 TDs. Can you say "OROY"? Not bad, rookie. Keep pushing the ceiling for yourself and the Texans offense!

Brian Cushing makes top honors again for the second consecutive week of the season. This guy is playing lights out destruction football on defense! It's incredible to have Brian back with the good guys.

Shane Lechler has been pinning the other teams back with incredible consistency for two games now. The fact that he is this good, and that we have a BZ winner on Offense, Defense and Special Teams in the same week, makes me pretty tingly all over that the Texans are becoming the well balanced team with key pieces in place in all aspects of the game to contend for a championship. Yes, the coaches have some wrinkles to work out, but they'll get there.

Lechler vs Titans: 7 punts, 48.3 AVG, 61 LONG, 1 Touchback. But let's take a moment and look closer and then consider how incredible this is for the Texans to flip the field and pin the opponent back to give our Bulls on Parade a chance to dominate (and more on the Bulls in a moment):

Friends, I don't really want to see the Texans having to punt seven times in a game, and wish the offense would do better on third down conversions, but if they HAVE to punt, this is the guy you want doing it! Also, a shout out to Jon Weeks kicking butt on Special Teams!

Value this time in your life kids, because this is the time in your life when you still have your choices, and it goes by so quickly. When you're a teenager you think you can do anything, and you do. Your twenties are a blur. Your thirties, you raise your family, you make a little money and you think to yourself, "What happened to my twenties?" Your forties, you grow a little pot belly, you grow another chin. The music starts to get too loud and one of your old girlfriends from high school becomes a grandmother. Your fifties, you have a minor surgery. You'll call it a procedure, but it's a surgery.

Your sixties, you have a major surgery, the music is still loud but it doesn't matter because you can't hear it anyway. Seventies, you and the wife retire to Fort Lauderdale, you start eating dinner at two, lunch around ten, breakfast the night before. And you spend most of your time wandering around malls looking for the ultimate in soft yogurt and muttering "how come the kids don't call?" By your eighties, you've had a major stroke, and you end up babbling to some Jamaican nurse who your wife can't stand but who you call mama. Any questions?

Long winded, but few quotes speak to this much truth. Make every day count folks!

Let's go below decks to the mess hall and see what's cooking... 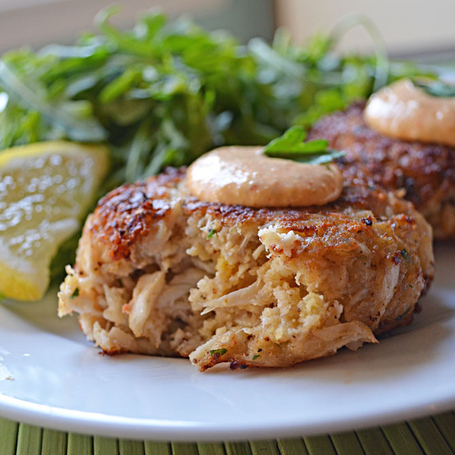 I was going to post a Beercan Chicken recipe, but this seems like a rough week for anything referring to our kicker's new nickname, and I am still trying to increase readership of this weekly thread. I figure Maryland is known for its crab cakes, so we'll improve on that with a touch of Houston's culinary prowess on a dish that travels relatively well for tailgating or at your home hosted entertainment hub for a Texans away game.

Combine and shape crab mixture into 8 crab cakes (1/3 cup each), and refrigerate to allow it to set. Heat a skillet for 3 minutes on medium high heat. Add 3 tablespoons canola oil or butter to hot skillet. Fry 3 to 4 crab cakes at a time for 3 minutes on each side. TAILGATING TIP: Pack the uncooked cakes, separated with wax paper, in a hard plastic container for traveling and keep chilled until ready to cook.

Thank goodness Schaub threw on time for a game winning TD to NUK!

We'll follow this closely and update with the NFL front office ruling on these violations under review...

This guy, Curly, is a true cowboy. One of the last real men. He's untamed, a mustang. It'll do us good to be in his world for a while.

The Houston Texans are the only team since the 1970 merger of the NFL and AFL to win their first two games in a season on the last play of the game. So we have that odd stat going for us.

Bulls on Parade - Why you should not be so concerned about the close wins for the Texans:

Simply put, this team doesn't have the foundational cracks that other worrisome Texans 2-0 teams have had in the past, nor should it since it's a direct descendant of the two 2-0 Texans teams that turned into AFC South division champions (2011 and 2012). If you're worried about the narrow margins in the first two games, just know that the Texans' defense, since allowing the first 28 points of the game to the Chargers, have done the following:

for transforming the sun from a bright happy source of light into a giant a-hole in the sky.

Speaking of hangovers, I sure miss MDC. I hope he's doing well.

It's off to Baltimore next week to face the defending "Superb Owl" champions, or as I like to call them, "the collection of dirty birds who scrubbed their winning roster of starters by 60% and lost two future Hall of Famers on defense". Yeah, good luck with that, but at least they have an elite $120M QB under the hood, eh? LMAO. Seriously though, the Texans will need to play a solid game in a hostile environment. Save any potential losses for NFC teams, and keep racking up AFC wins, please. That whole playoff seed thing seems to actually matter.

Speaking of NFC teams, the Texans face the Seahawks at Reliant after this Ravens game and then travel to San Francisco to play the 49ers the week after that on Sunday Night Football. One game at a time boys, one game at a time.