No All-22 camera angles for preseason? No problem. All one needs is a cell phone camera and the willingness to kneel in front of a TV like a weirdo to do a bit of in-depth film study. But all YOU have to do is read it. Wrap up the preseason right with Battle Red Blog.

We'll start with the first quarter of Week 3 versus the New Orleans Saints. Shane Lechler just pinned Drew Brees deep in his own territory. The Texans are countering the Saints' 01 personnel grouping (4 WR, 0 RB, 1 TE) with their dime defense. Take a look below. 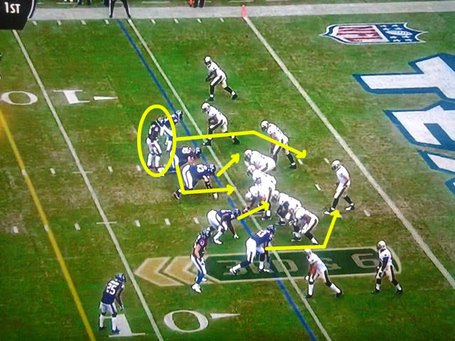 Wade Phillips must have been eager to relieve some built-up stress after watching New England pick apart his defense last January. Above you can see the blitzing scheme outlined. 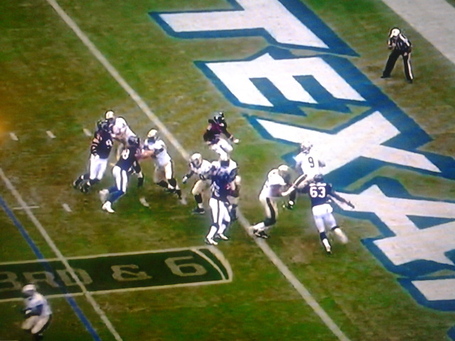 Above you see the result.  Swearinger is completely free to the smash the quarterback, but a brief hesitation allows Brees to scramble to the right.  Jefferson shows his speed and some promising technique to pressure Brees' blind side.  The play would end up as an incomplete pass, with Jefferson nearly causing a safety.

It's exciting to see that Phillips hasn't lost his testicular fortitude when it comes to carefully disguising and executing blitzes. Hopefully he'll have some new tricks up his sleeve by the time the New England Patriots come to town.

Next we'll take a look at Ben Tate's 39 yard run against the Saints. 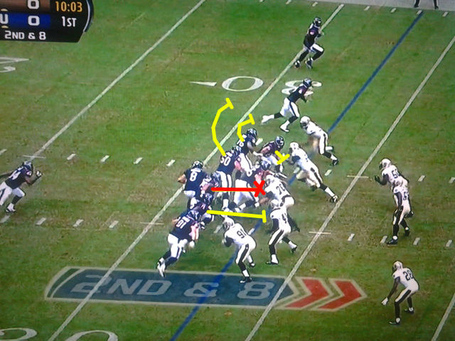 Above you see the genesis of a beautifully executed zone run to the left. But this isn't the typical zone stretch we usually see. The Texans are in 12 personnel (2 WR, 1 RB, 2 TE), with Andre Johnson and Lestar Jean lined up at the top of the screen. We'll start there and work our way down. 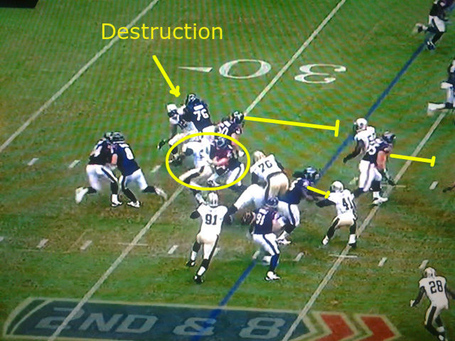 Above, you see Matt Schaub handing off the ball to Ben Tate into what looks like a lot of chaos. 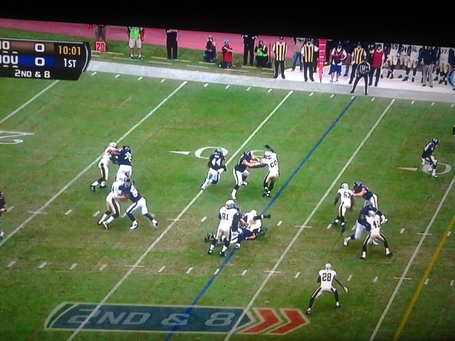 Fractions of a second can make quite the difference, no? Before, what looked like a potentially blown play now looks like a perfectly synchronized machine. Graham blocked his man away from danger, and Tate turned the corner with Johnson and Jean in front of him.

Pulling guards and tackles combined with the Zone Blocking System is something that I hadn't seen much before last year, but I'm obviously happy with the potential.

Tate will finish the run 39 yards and 4 broken arm tackles later thanks to a brilliant fusion of two styles of run blocking. Check out the full play in this video.

I'll finish with a couple of screenshots I thought were interesting. 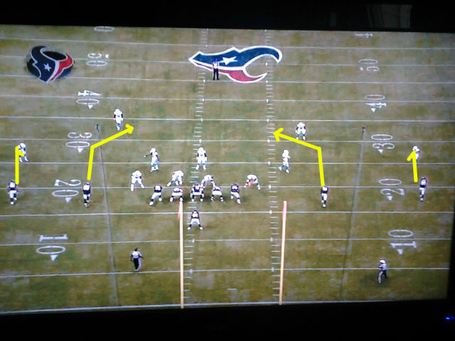 Above you see the Texans in what appears to be a 4 WR set, but it's actually 2 WRs and and 2 TEs.  Owen Daniels and Garrett Graham are both split out wide with Andre Johnson and DeAndre Hopkins lined up inside.  I highlighted the routes they ran.

I would love to see more of this in 2013.  Many defenses would counter a 12 personnel grouping (strongly indicating a run play) with their base set, only to regret it when they see the formation above. The Dolphins are in zone coverage, meaning the the linebackers are responsible for the middle of the field-- easy pickings for Schaub and Andre who finished the play with a big gain down the middle.

If the Dolphins were to have used man coverage in their base 3-4 set, the Texans would have likely had linebackers in coverage against our two pass-catching tight ends-- a definite advantage for the offense.  On the other hand, with few linebackers in the box, Schaub could audible to a run and leave Tate with plenty of room in the second level of the defense.  Oh, the possibilities.  I hope to see more of this formation in the future. 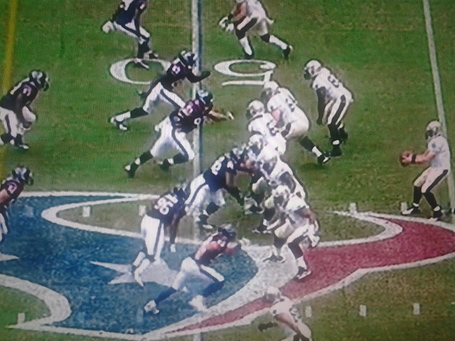 Finally, I snapped this shot when I noticed just how quickly Earl Mitchell got off the snap.  He's engaging his blocker before anyone else on the defensive front.  The offensive line has barely reacted and Mitchell is already crashing the A gap.

More plays like these from Mitchell and the Texans will be wreaking havoc in the backfield all year.

Leave your thoughts in the Comments below! Happy Labor Day, BRB.