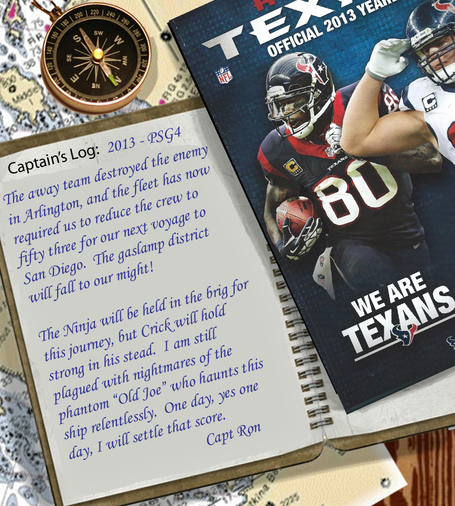 Captain's Log Supplemental - "Where no fan has gone before" might be a more suitable title as I kick off a series of entertaining threads this season to refuel the thirsty readers of BRB who have survived one of the most active and exciting off-season's in the Texans' brief history, and to chronicle our journey through the season we all feel will be historic for this franchise. If the "Captain's Log" is well received, I will do my best to provide a weekly version to entertain and stir the minds of fellow fans of the Texans. If it is not well received, no worries at all, we can jettison it overboard and continue to rely on the far more capable BRB staff writers who I suspect will be in full swing here shortly. Most notably, and either way, we'll be hammering the drum for the return of our beloved MDC and the ever popular 2DH.

Jerruh's World was the site of absolute siege and destruction by our away team who manhandled the Cowboys with extreme prejudice in every way. Starters for both sides were secured to the observation deck, but the depth of the Texans roster really showed during this invasion of Arlington. It may not count for much as the fourth pre-season game, but anytime the Governor's Cup and bragging rights are at stake, we like to see Southern Oklahoma in flames and tears.

The Point of No Return

Texans kicker Randy "Beercan" Bullock shined with FOUR kickoffs out of the end-zone for no return, and a fifth that was five yards deep in the end-zone. If he keeps this up, we'll sweat a lot less about Marciano's coverage teams and the nightmares that have haunted Texans fans for years now.

Also "not returning" are several players who really had a great camp with the Texans and attracted the attention of other NFL teams. Anyone who watches HBO's Hard Knocks series, and/or pays attention to the interviews of Rick Smith and Gary Kubiak during camp, understand that part of the process for some players is to showcase their ability so that they have an opportunity to sign with another team if they don't make the 53 man roster where they started the pre-season.

May these fine young men live long and prosper with their new teams, and congratulations to making it in the NFL:

Why Kate, you're not wearing a bustle. How lewd.

"What am I, a doctor or a moon shuttle conductor?"

The Texans are the only team in the NFL to have produced a rushing (Foster), receiving ('Dre), passing (Schaub) and sack leader (Watt) since Kubiak became head coach in 2006. Twenty-six of the 30 Pro Bowl selections in Texans team history have come during Kubiak’s tenure. (1)

Kubiak’s squad produced a number of team and individual franchise milestones in 2012. The Texans set franchise records with a 12-4 record, 26.0 points per game and an AFC-best nine Pro Bowl selections. Second-year defensive end J.J. Watt led the NFL with 20.5 sacks and became the first player in franchise history be voted Associated Press Defensive Player of the Year. Wide receiver Andre Johnson had a resurgent season and led the AFC with 1,598 yards receiving. Left tackle Duane Brown, left guard Wade Smith and center Chris Myers were selected to the Pro Bowl from the offensive line. Brown and Watt were both AP First Team All-Pro selections. (1)

No doubt you've had enough of reviewing lamenting 2012 and grinding through the pre-season, so let's go below decks to the mess hall and see what's cooking... 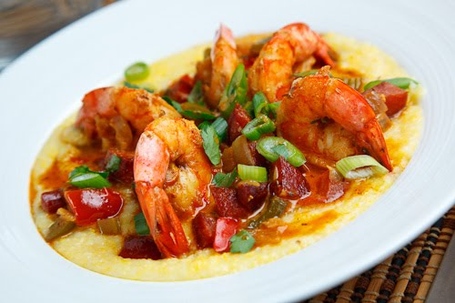 A southern favorite, and this is a recipe I have refined over the years to great thunderous gastrointestinal delight for the crew. Enjoy!

Need a new drink recipe? OK, pull up a stool and wet your whistle mate:

Here is absolute proof that mixology is as much chemistry as it may be art. It flat out sounds wrong that this would taste good, but it actually does. It doesn't hurt that it gives a little extra energy along the way too! Drink responsibly of course.

As you know, Antonio Smith will be serving his one game suspension as the team heads to San Diego next week. May the Ninja meditate on his predicament and come out swinging focused and effective.

Not tossed into the brig, but worthy of a walk on the plank if he pulls that crap again, rookie undrafted free agent cornerback A.J. Bouye went too far with his post-interception celebration by running over to the star logo midships midfield and doing his best Terrell Owens impression. We'll let him off this time since he was probably misunderstanding when Wade Phillips, in his best impersonation of Edward Longshanks, said to "sack Southern Oklahoma" like it was York! Good job being zealous, and congratulations on making the team!

"It feels great," Bouye said Monday. "I'm not surprised or anything, and it hasn't hit me yet, but it feels great."

A cornerback out of Central Florida, Bouye is one of a quartet of undrafted rookies to make the Texans active roster. He joins running back Cierre Wood and linebackers Willie Jefferson and Justin Tuggle as players who weren't selected during the NFL Draft in late April. Even though Bouye said he wasn't surprised to make the team, he still said the Thursday night and early Friday morning hours following the preseason finale against the Cowboys were restless ones.

"I ask J-Joe a lot for different techniques," Bouye said. "He's been helping me out a lot. I talk to Ed a lot. I talk to all the DB's. We're like brothers there, so we're always talking, staying close." (1)

Cierre Wood; "It's my goldfish Larry"

At a media interview Monday at Reliant, Wood said; "Everybody asks me about T’eo. That’s something that I expected that was going to happen. I got asked on the street a couple times."

"His tape speaks for itself. I really don’t get questions about his athletic abilities," Wood said. "I get questions on the thing that surrounded him the most. The main reason he was in the limelight."

"It was along the lines of, if I came in here with a goldfish and said, ‘Hey, this is my goldfish, Larry.’ You guys are going to go, ‘OK. So what?’ You go home after that," Wood said. "I would come over to ask for a controller and he would be like, ‘I’m talking to my girl.’ … I introduced myself, ‘Hi. I’m Cierre. How are you doing? Nice to meet you.’ And I went on about my business."

Captain's note to the ship's doc; "Keep an eye on Wood. Let me know if he talks to his goldfish or an empty seat next to him."

As a SCUBA instructor of many years (by hobby), I usually find something each week with respect to dive training or exotic excursions that is fascinating. I just learned of the deepest pool in the world, located in Brussels, which reaches depths of 113 feet!!! Consider this on my bucket list. 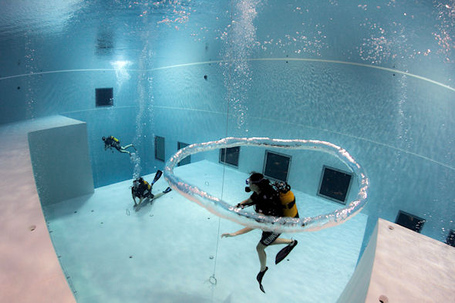 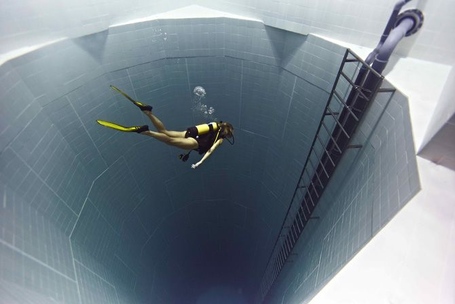 Passing yards needed by Matt Schaub to hit 22,000 for his career going into year 10. Notwithstanding 2011 when he was injured by Albert Haynesworth, Matt is averaging 4,382 per season dating back to 2009. Now that Matt has a plethora of weapons to throw to, just imagine what he can do for the next few years!

Why Ike, whatever do you mean? Maybe poker's just not your game Ike. I know! Let's have a spelling contest!

The Texans head to San Diego next Monday and we look forward to a statement game to kick off what should be a historic season. So pull on your favorite Texans jersey and get ready folks, it's going to be a great ride!

Where will you be watching the next Texans game vs the Chargers?

What will you be cooking and eating?

Which player do you think will get the game ball for the Texans?