Freddy has broken down the tape. The verdict is that the Texans' Wade Smith doesn't have it anymore.

After watching the tape from Sunday's game, I came to the conclusion that the two worst Texans on the field were Matt Schaub and Wade Smith.

Nobody wants to have another Matt Schaub internet fight though, no matter how many times he throws the worst pick-six you've ever seen in person, so let's talk about Wade Smith.

For some reason, Wade Smith went to the Pro Bowl last year. I would say it was a reputation pick, but he didn't even have much of a reputation prior to joining the Texans. Is it possible that he is the Just Winz Guard? That people pin the offense's success on him coming over in 2011? I'm not sure, but that seems as likely as any other conclusion. In 2011, he was a damn fine guard. In 2012, he had problems getting to the second level and was a minor liability in pass protection.

This year, it's looking more like the 2012 vintage than the 2011 one. I personally watched Jurrell Casey, Amateur Proctologist, put the hurting on Smith just about every time they were lined up one-on-one. Tim swears that Smith rolled Duane Brown's ankle in the season opener against the Chargers-- I didn't watch that side of the play and time is at a premium this week, so I'm going to take his word for it. Brown was very bad against Dwight Freeney in Week 1, but I would suggest that Smith was no better right next to him.

Anyway, here is Freddy's take on Wade Smith so far: 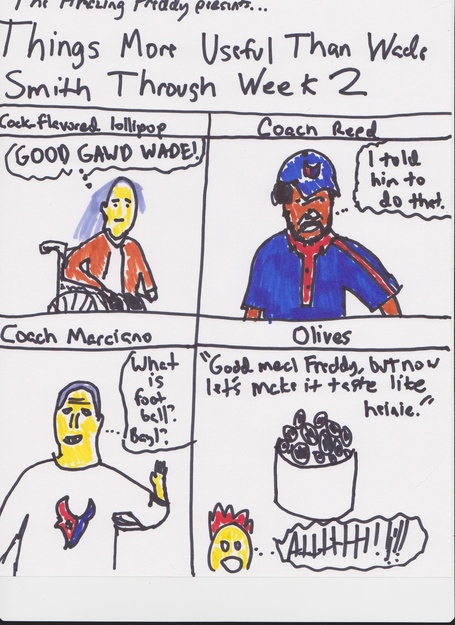