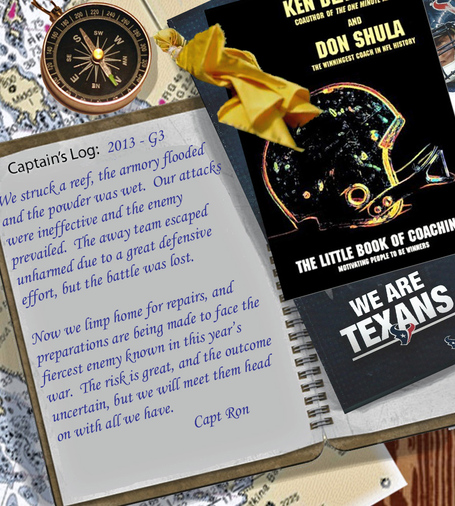 My goal is to have this published on Tuesdays, but I have a busy schedule the next couple of days, so I'm getting this out a bit early.

It's Week Three and the Texans are 2-1. We have certainly seen better from them, but we have also seen worse. Good teams make mistakes and have bad games. Great teams find a way to correct things and press forward for success. Considering the issues teams are facing like the Jaguars, Giants, Redskins, Vikings, Steelers and the mutiny of the Buccaneers at that pirate ship in Tampa, I'd say things are very positive here in Houston overall with issues that are more adjustments and tweaks than full scale rebuilds.

I'm reminded of when I learned to snow ski and I kept falling down. The instructor said if I focused on falling, I would lose control and fall often, but if I asserted my will against the mountain and took control against it, I could handle any slopes in the world with technique and an imposing confident attitude. He was right, and I was ski racing competitively within two years. The same is true in anything in life really. If you tip toe around and ask for permission, then life is "happening to you". If you step into it and apply your will in what you do, then "you influence and affect the life and world around you". I feel this is what needs to change about the Texans' offense. They need to stop the fearful and timid attitude of "taking what the defense offers" (asking permission), and start imposing their will. They have the players, and they have the coaches, and they have the skills to do this. They need the game plan and the mental attitude to change for success.

I have heard it said many times from the best coaches that there are at least three things that make it near impossible to win a game in the NFL:

3. The other team has an exceptionally emotional driver, like a dead owner (Al Davis), a coach returning from cancer (Chuck Pagano), or a player entering the Ring of Honor at halftime (Ray Lewis).

Unfortunately for the Texans, all three of these elements happened on Sunday. Two of these were avoidable if the team played better. Also quite notable is that all three examples of emotional drivers happened at the Texans' expense in 2011, 2012 and now in 2013.

Despite frustration with the first three weeks, I have confidence this team can move forward and have a great season. This week vs the Seahawks is tough, but not impossible, and we are at home which eliminates one of the biggest assets Seattle has in winning with record breaking crowd noise. The next week, the 49ers look very vulnerable, and we match up well. I think we can be 3-2 after five weeks, and it's not insane to think 4-1 if they dial up plays that the offensive line and Matt Schaub can use to take advantage of aggressive defenses.

OUT vs. Ravens WEEK 3

The Texans were terrible in this game, so before we herald anything positive, let's head below decks into the detention center and line up those most responsible for this loss. 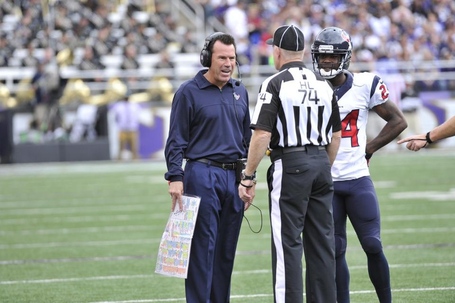 The officiating in this game set a ridiculously high standard. These zebras threw more laundry than your neighborhood dry cleaner. How the NFL can field so many different crews in black and white, who all hold such varying approaches to calling games, is beyond ludicrous for a league that has been around for decades and generates revenues nearing $8 billion per year. You would think they could get their referees all on the same page! That being said, they nailed the Texans for 14 penalties and 113 yards, and the Ravens for 10 penalties and 87 yards.

The whole team should be dragged out and flogged for lack of discipline in this game, but the overzealous officials make me think the number of penalties for both teams would have been a different outcome if they had one of the other 15 crews this week.

With as many flags as they threw, they still missed this face mask on the Ravens during a sack of Matt Schaub: 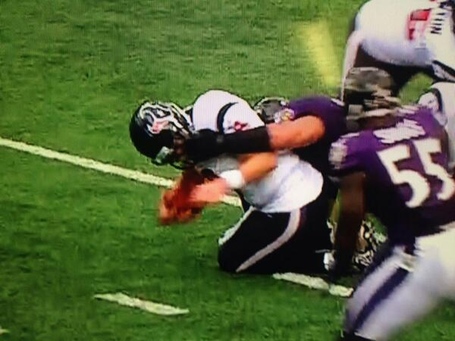 There were indeed mistakes leading to this loss, so who gets the tip of the sword and marched to the end of the plank?

Johnathan Joseph - Unsportsmanlike Conduct: Taunting - There is no place for this on the field, especially from a veteran player who has great leadership ability and a better reputation than this. Clean it up! Lucky for him that series ended with a punt. Now, off with ya!

These two guys need to be keelhauled (punishment by dragging under the keel of a ship) for both missing tackles on a punt returned for a touchdown. It might be obvious to go after Coach Joe Marciano of the special teams, who should indeed be scrutinized for coverage units who, season after season, show they have major issues. However, this is a case of two players who have been in these roles with the Texans for three seasons now. Normally we sing praises for both of these guys, but so far this year, Braman has been invisible. D.J. Swearinger also missed a tackle on this play, but he did well on defense and is a developing rookie in his third game (not third season), so he gets a pass (for now). All three of these players looked more like High School level talent out there on that play.

Last but not least, I'm calling the following all out for the primary reason this game was lost:

While not penalized by officials, they earned a trip to the brig this week by failing to lead and perform. Their role is to implement and execute plays to lead the offense. They failed miserably. Three field goals in the first half, and no points in the second half. This was almost as bad a performance as last year's game at home against the Vikings when they managed just two field goals.

They need to design plays for Schaub to survive the pass rush when the offensive line is struggling. They need to stop playing so cautious and scared. Other teams around the league find a way to do this for less mobile QBs behind questionable protection. We can't change the fact that players will be hurt and that depth is thin at times, and we can't change the fact that Matt Schaub is not very mobile.

The Broncos are now on their third center and just lost their All-Pro Left Tackle for the season, yet 37 year old Peyton Manning, who is also immobile and has a fused neck, seems to be doing just fine. By "just fine" I mean in his first three games he has thrown for 1,143 yards, 12 touchdowns and NO interceptions. That puts him on pace for 6,096 yards and 64 touchdowns for the regular season. The guy who replaced Ryan Clady, the All Pro Left Tackle? That would be Chris Clark, a 27 year old un-drafted free agent of 2008 who was released by the Vikings and signed off waivers by the Broncos. Put that into perspective.

No, Matt is not Peyton, but the point is that adjustments to play design, and execution on offense, can make a difference to give the QB time. If they don't find a means to overcome this, the best defense on the planet can't help them win in the NFL.

"There is no way, NO WAY, that you came from my loins. Soon as I get home, first thing I'm gonna do is punch yo mamma in da' mouth!"

J.J. Watt led the defensive front with 9 tackles, 3 tackles for a loss, and 1 sack. The defense did well overall in holding the Ravens to just one field goal in the first half. The score at the half should have been Texans 9, Ravens 3, but the offense and special teams left the back door open in giving up fourteen points, resulting in a 9-17 halftime deficit. In the second half, the offense remained flaccid with ZERO production, and the defense was flagged often and wore down to surrender just one touchdown in the game and another two field goals before packing it in. It's hard to find bright spots in an embarrassing loss, but J.J. Watt remains the pillar of the defense. If only he could play offensive tackle too!

Shane Lechler continues to amaze, and is now a fixture on the BZ Wall of Fame. It's unfortunate that he is the long pole in the tent for this team the first three games, and I hope he is found resting for many hours on the sidelines very soon. Keep digging us out of holes! Some might suggest he outkicked the coverage on that punt returned for a touchdown, but the coverage team clearly needed to tackle better.

Randy Bullock was three for three on field goals in redemption from the previous week. In fairness, it was revealed by Kubiak that one of the missed kicks against the Titans last week was the result of the laces positioned incorrectly toward the kicker, which is why the coach focused on how all three specialists own that situation for being better on field goal attempts.

Nothing to celebrate obviously, but we still have to eat. Let's go below decks to the mess hall and see what's cooking... 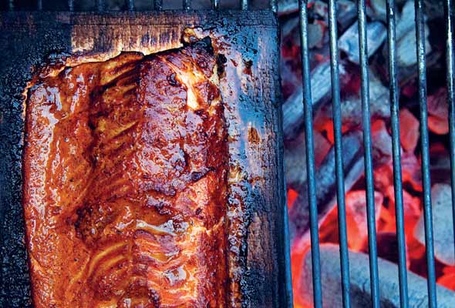 With the Seattle Seahawks coming to town, we expect them to bring the toughest game on the regular season schedule for the Texans. The least they could do is have the common decency to bring in some fresh wild salmon too! This is the best food product to come out of the great northwest, and a healthy source of heart healthy protein.

Recipe can be found here at this link: Captain's Cedar Plank Salmon.

"If they'd a cremated the sum-bitch, I could be kickin' that Mr. Bandit's ass around the moon by now." 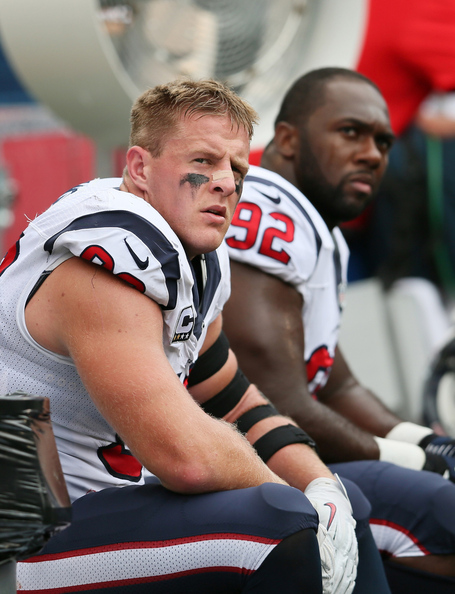 Points scored on the Texans in three games. In the AFC South, the Jaguars have allowed 92, the Titans 56, and the Colts only 48. If it makes you feel any better, the NY Giants have allowed a league-worst 115 points. They are the only team currently in triple digit points allowed after three weeks.

Points scored on the Texans as a direct result of mistakes by the offense and special teams. Yeah, that needs to get fixed immediately.

Points scored by the Texans in three games. It leads the AFC South, where the Colts have 68, the Titans 60, and the Jags have scored 28, which is currently worst in the NFL.

The total number of losses the Texans have now experienced as a franchise. Now that we got that out of the way...

Let's move on from this and enjoy the rest of the long season.

The Seahawks are coming to Houston, and Hell is coming with them. The good guys have their work cut out for them this week in preparing an ineffective offensive line and immobile quarterback for the best defense in the NFL. I think most Texans' fans emotions have gone from Super Bowl hopes and swagger to "bracing for impact." The Seahawks could end up losing if they get overconfident and make mistakes, but there is no doubt that the Texans will have to play their cleanest, hardest football while creating a way to get this offense working if there is any chance to win at home this next week.

Aside from dealing with a suffocating Seattle defense, the Texans will also face Russell Wilson. They might hope he comes up missing as a Cast Away en-route to Texas, or deal with his dynamic ability on the field all day, and hearing visiting fans yelling in their best Tom Hanks voice...."W-I-L-S-O-N!!!!!!" 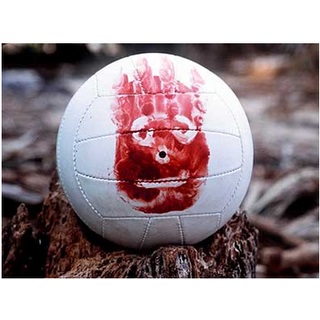