Capt Ron chronicles the Texans' latest overtime game against the Cowboys and the need to move on to the Colts at NRG in just four days. 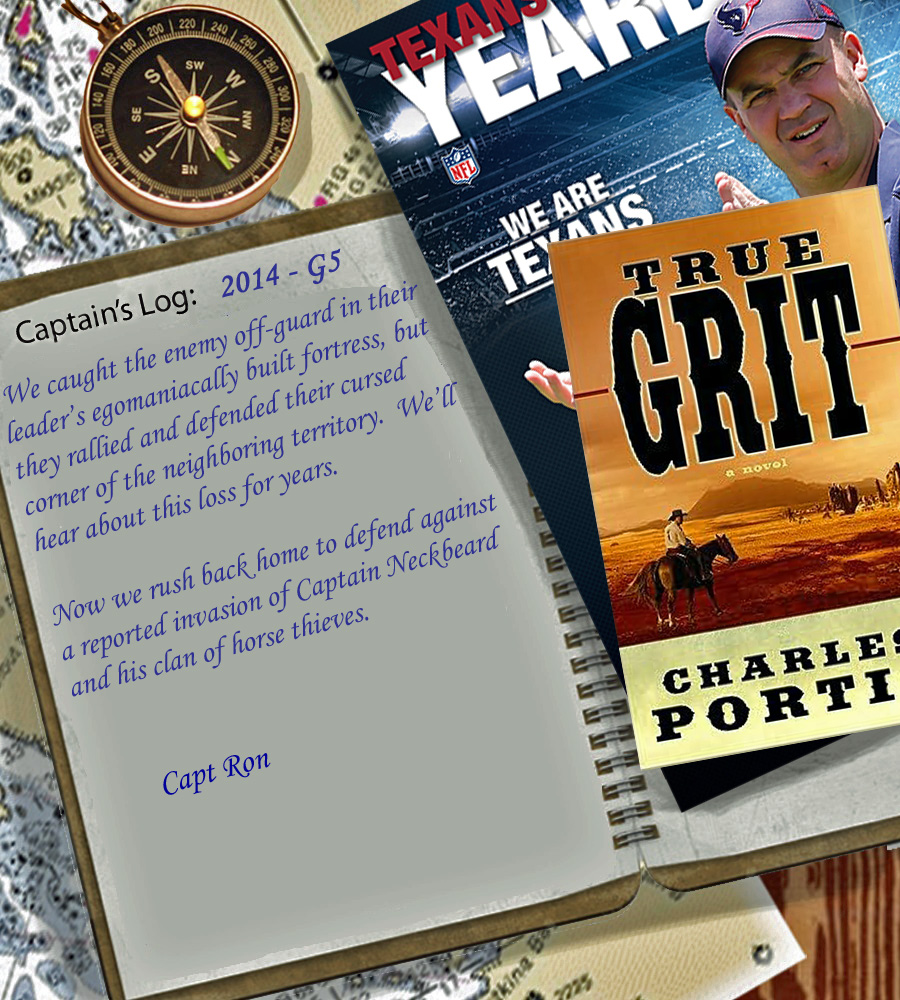 The Texans' defense did enough in the first half to hold the Cowboys to only 3 points until late in the third quarter.  Houston would create two red zone turnovers as well, but it wasn't enough to win the day.  The offense didn't score at all in the first half and failed to put the game away after winning the coin-toss for the first series in overtime.  Houston needs a LOT more out of this offense, especially the passing game, which was limited to 154 yards and no touchdowns today.

The one positive I take away from this is that Bill O'Brien and the staff are excellent at in-game and halftime adjustments to their game plan.  They need to find a way to get this offense going earlier in games, because they won't win all of them that remain close.  I can't even imagine how this would have ended had the defense not been able to get two red zone turnovers.  Kudos to all the traveling fans who rocked that stadium!

Time to put this one behind us.  Aside from an in-state grudge-match, it was mostly a meaningless out of conference game that won't decide any tie-breakers.  In just four days, Houston hosts the division rival Indianapolis Colts.  They need to heal up and prepare quickly!

The Colts edged past the Ravens in a 20-13 win.  They are 3-2 and head to Houston this Thursday to challenge the Texans for the lead in the division.

The Titans are 1-4 after losing at home to the visiting Browns 29-28.  They blew a 28-10 halftime lead, allowing Cleveland to roll up 16 points in the 4th-quarter.  They get to host the Jaguars next week.

The Jaguars lost at home today to the visiting Steelers 17-9, so they are 0-5 on the season.  Jacksonville scored a field goal in each quarter except the fourth, so that's one field goal for each of the three fans in attendance.  They will travel to Tennessee next week, and the networks will broadcast it because the contract says they must.

"I'm a doctor!  Not a quarterback whisperer!"

"Simmons is old!  He should've been out of the game years ago, but he can't stay home because he hates his wife!  You've met her at the Christmas parties.  She's the one that gets plastered and calls him a retard!"

Foster rushed 23 times for 157 yards and the only 2 touchdowns for the Texans yesterday.  He also caught 2 passes for 15 yards and was the obvious bright spot for Houston's offense in the game.  He can't do it alone out there, but he sure does look amazing when he's in the groove!

Ryan Fitzpatrick, and the rest of the offense not named Arian Foster need to get it sorted out if they intend to beat any good teams this season.  I'll leave it at that, because I'm ready to move on.

"Here goes: I sped.  I followed too closely.  I ran a stop sign.  I almost hit a Chevy.  I sped some more.  I failed to yield at a crosswalk.  I changed lanes at the intersection.  I changed lanes without signaling while running a red light and...SPEEDING!"

Tony Romo, "We played on the road today in that football game....we need to tighten up selling our tickets." #Texans fans were loud.

Romo says #Texans fans were louder today than he has heard at road games this season. #Cowboys had to use a silent count all game.

We all agree, Fitz:

Shake it off and beat the Colts!

"Thursday nights aren’t exactly ideal for anybody. We’ll turn around, we’ll find a way, that’s what we do." Watt said. #Texans

Next up, the Texans host the Colts on Thursday Night Football this week!