Corzo is analyzing the salary cap situation for the Houston Texans entering the 2014 season, continuing with the next five biggest hits. Catch the first five here.

Before we jump in, it's worth noting that Spotrac updated Andre Johnson's cap hit this year to $15.6 million... up from the $12.1 million I noted in my last cap post. This, plus some other adjustments, has the Texans' projected cap space at a snug $1.4 million. I'll keep an eye on other such updates. This development also put Andre at his rightful spot atop the salary cap list.

A Facebooker recently propounded on our page the idea that there were no other Texans besides J.J. Watt and Andre Johnson who had a truly "good" season. Though a bit exaggerated, it's not a surprising thought following The Great Regression of 2013. Nevertheless, I would nominate center Chris Myers as an answer to his question. I haven't devoted much time to watching Myers' play on All-22, but he's never stood out so egregiously the way Derek Newton and Wade Smith do. Average football-watching schlubs like me naturally keep their eyes on the ball and only notice linemen when they're not doing their job.

Either way, Myers' cap hit increases this year to $7 million.  Considering how inconsistent the line was last year, I'd postulate that he's worth every penny. A savings of $3 million with his release simply wouldn't be worth adding another wheelbarrow full of questions to this team. His would-be replacement, Ben Jones, has shown potential, but once upon a time, so did Newton.

Consider Myers a prime candidate for an extension in order to lower his immediate cap burden.

This is where it gets really interesting. Tight end has almost always been a position of focus and depth in the Gary Kubiak era, so it's fitting that the position is at a real crossroads now that there's a new regime. Owen Daniels has been an integral piece of the offense since he was drafted, but the injuries have put a damper on him becoming a consistent upper tier tight end.

Knowing this, do Rick Smith and Bill O'Brien decide to cut ties with the eight-year pro and pocket the $4.5 million in savings? Daniels' backup, Garrett Graham, is now a free agent and will likely be lured away by money the Texans won't be able to match.  This leaves Ryan Griffin, the 6'6" UConn tight end entering his second year as the only other viable option on the roster. His stature certainly must be intriguing to O'Brien, who helped coach Rob Gronkowski for two years.

Between Daniels and the other potential cap casualties in this article, tight end is a position I wouldn't mind seeing manned by a second-year guy and a cheap veteran or new draft pick. If there are cuts, Daniels will be among the first to go.

Danieal Manning is due a slight bump in pay this year and has proven to be a useful player on a defense that is paper-thin at his position. Releasing him outright would create another $4.5 million in cap cushion.  It would also once again put Shiloh Keo in a position to start, therefore downgrading the Safety depth chart from Uhh... back to FFFUUUUU--

Extending his contract is an option, as it is with Daniels; with both players, they'd be committing future dollars to players on the wrong side of 31 and coming off season-ending injuries.

Personally,  I don't want to go back to a world where Keo and young D.J. Swearinger are the starters in the backfield, and you can't make me.

It's a shame that two of Brian Cushing's prime years have been cut short by unlucky, freakish injuries. Insult added: they were the cheaper years of his six-year, $52 million contract. If his effect on the defense isn't obvious yet... 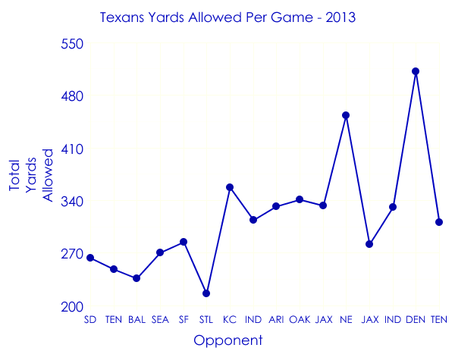 You'll notice the upward trend after the Rams game. Cushing was cut down and lost for the year just after the second half began against the Chiefs. It's hard to overstate: Cushing will be integral to the success of the defense regardless of the new scheme.

Kareem represents the last class under the old collective bargaining agreement and thus makes his appearance on the list despite plodding along on his rookie contract. Similar to the situation with Manning, the Texans are in a position where they must re-sign Jackson because there's a puddle's worth of depth behind him.

He took his lumps as a rookie and has grown into a legitimate NFL cornerback. It would be a travesty to see that growth pay dividends for another team after this year.

OK, yes, the Schaub extension proved to be misguided, but in this pass-heavy league, it might be harder to find decent-to-good cornerbacks than actual quarterbacks. Don't get gun-shy, Rick.

That's it for 6 through 10 on the Texans salary cap list. It'll be most fascinating to see what Smith and O'Brien do with these five players. Short of Cushing, all these players are on a bubble of dubious tensile strength.

As always, I'm curious to hear your thoughts on the matter. Have at it, folks.