Capt Ron continues this BRB series that previews the coaches who will lead the Houston Texans franchise in 2014. Next up is Defensive Coordinator: Romeo Crennel.

When the Texans' owner said this at the Bill O'Brien introductory press conference...

"We expect to be in contention next year," McNair said. "We don’t consider this a long-term rebuilding process."

...I had hoped we would see the stronger parts of the franchise remain intact. While it is not unusual to see a new head coach bring in his own staff, it still feels like an "extreme makeover" for a team that was a strong contender in 2011 and 2012.

We do have recent examples where a head coach and quarterback change can lead to immediate success when you consider the Seahawks, 49ers and Chiefs. All three of those teams also have very strong defensive units that greatly underscore the well proven adage that "defense wins championships."

If that is true, and I agree that it is, then the Texans need to focus on having a top defense, and that all starts with the coordinator.

Crennel has been coaching football almost as long as the I-45 Gulf Freeway has been under construction. I did use the qualifier of "almost," since that project technically started in 1948, a few years after World War II ended.

OK, so he's only been coaching since the tail end of the Vietnam War. The odds are that the Gulf Freeway will still be under construction when the NFL expands to other planets, or at least on the 100th anniversary of J.J. Watt's induction into the Hall of Fame, but I digress.

Crennel comes to Houston after a year off from a three-year tour with the Chiefs. He was the defensive coordinator the first two seasons for the Chiefs starting in 2010, interim head coach in 2011, and head coach in 2012. Prior to Kansas City, he was the head coach of the Browns from 2005 through 2008. Crennel is best known for his tremendous success as defensive coordinator in New England from 2001 through 2004, where he helped the Patriots win three Super Bowls.

One thing to note about that 2001 season for the Patriots: In the two playoff games and Super Bowl, the offense only scored one touchdown in each of those three games they won. Say it with me:

There is a lot of speculation, even concern, about how the Texans' new defensive coordinator will utilize J.J. Watt. Have faith that great coaches know how to take advantage of tremendous talent to get the mismatches they need to be successful. The thing that stands out to me with Crennel is that he is known for changing up the scheme to address each individual match-up on a weekly basis. This "adjust on a weekly basis" is a common theme we are hearing regularly from the O'Brien staff, and it is greatly welcomed after witnessing a Texans team that became all too predictable on both sides of the ball.

J.J. Watt commented on his confidence in his new coordinator recently, and expects him to have a "great plan." 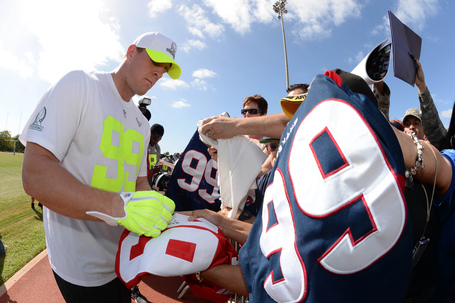 When Crennel was asked about his plans for the Texans' base defensive scheme (3-4 or 4-3), he responded:

"We're going to run a multiple defense," Crennel told a small group of media at the Senior Bowl. "You’re going to see a little of everything." He continued with; "Knowing who you got and what their strengths and weaknesses are will go a long way to determining how much we run of whatever we run."

The fact is that in today's NFL, defenses are in Nickel and Dime packages more than they are in their base scheme anyway. I think we'll see quite a bit of creativity from Crennel on a weekly basis, with an emphasis on "weekly."

As much as I know the Texans are desperate to address the most critical position on any NFL roster, and I'd be a huge fan of us getting Teddy Bridgewater under center in that effort; there is this great curiosity I have to see what it would look like with Watt and Jadeveon Clowney lined up on either side of a space-eating nose tackle this year. I honestly swoon at the thought of Crennel unleashing that defensive line every week.

Speaking of Clowney, yesterday Andre Ware, part of the Houston Texans' radio broadcast team, said he thought Jadeveon Clowney is talented enough to have gone straight from high school to the NFL. That echoes what Steve Spurrier said about the star defensive end who is leaving South Carolina after three seasons:

"He could’ve come out of high school, probably, and gone straight to the NFL and played," Spurrier said. "He’s just one of those rare guys who has tremendous strength and quickness and explosiveness. And he likes playing. He’s a good guy, he’s really a good teammate also."

Watch this highlight reel of Clowney in high school, and you may concur:

Are you excited about Crennel and the rest of the defensive coaching staff for 2014? Do you think the team will address the secondary or linebackers as a priority, or campaign for drafting Clowney to bolster the defense? Sound off below with your latest thoughts and opinions.

Spoiler Alert: For those of you who are rightfully excited about new linebackers coach Mike Vrabel, he will be the focus of the next installment in a few days.