Brett Kollmann of Battle Red Blog breaks down the good, the bad, and the painful surrounding the surprising injury to one of this year's most promising draft prospects, Notre Dame defensive end Stephon Tuitt.

One of the most anticipated workouts at the 2014 NFL Combine for every team that runs a 3-4 defense was Stephon Tuitt, former defensive end and human destruction machine of the Notre Dame Fighting Irish. Unfortunately for Tuitt, and for the teams that eagerly awaited his performance, his combine was over before it even began when a Jones fracture, a fracture in the fifth metatarsal on his left foot, was revealed in a scan done at the Combine per NFL Network’s Daniel Jeremiah.

Wondering what a Jones fracture actually was, I dove into researching the injury for myself.

Fractures of the proximal portion of the fifth metatarsal may be classified as avulsions of the tuberosity or fractures of the shaft within 1.5 cm of the tuberosity. Tuberosity avulsion fractures cause pain and tenderness at the base of the fifth metatarsal and follow forced inversion during plantar flexion of the foot and ankle. Local bruising, swelling and other injuries may be present. Nondisplaced tuberosity fractures are usually treated conservatively, but orthopedic referral is indicated for fractures that are comminuted or displaced, fractures that involve more than 30 percent of the cubo-metatarsal articulation surface and fractures with delayed union. Management and prognosis of both acute (Jones fracture) and stress fracture of the fifth metatarsal within 1.5 cm of the tuberosity depend on the type of fracture, based on Torg's classification. Type I fractures are generally treated conservatively with a nonweight-bearing short leg cast for six to eight weeks. Type II fractures may also be treated conservatively or may be managed surgically, depending on patient preference and other factors. All displaced fractures and type III fractures should be managed surgically. Although most fractures of the proximal portion of the fifth metatarsal respond well to appropriate management, delayed union, muscle atrophy and chronic pain may be long-term complications.

So what does that even mean? In short, Tuitt broke the long bone on the outside of his left mid-foot. 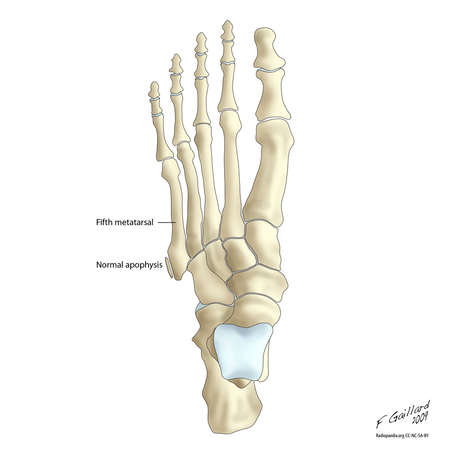 Tuitt could have been previously unaware of the severity of his injury because of the frequency with which Jones fractures are misdiagnosed as sprains. Were it not for the extensive medical scans at the Combine, which are arguably the primary purpose of the Combine in the first place, Tuitt might have never found out about the fracture for himself and made the injury even worse through running drills. Here is a quick presentation on the treatment of Jones fractures given by Dr. Thomas Anderson, M.D. from the Steadman Hawkins clinic.

Jones fractures can be extremely finicky to heal from patient to patient. Blood flow is inconsistent to the fifth metatarsal because of its relatively remote positioning in the circulatory system, so healing already takes longer than many other bones in the body. When combined with the bone’s weight bearing nature and the plethora of tendons that naturally tend to pull the fracture apart just from minor every day flexion, the break has an extraordinarily high percentage of failed treatments when surgery is not involved. Recovery time without surgery can take as long as four or five months, and even then chronic fractures and pain can develop if the bone does not reunite properly. In a study conducted by the American Journal of Sports Medicine, eight out of eighteen patients (44%) who were treated for Jones fractures without surgery failed to heal – five nonunion, one delayed union, and two refractures.

As grim as the prognosis sounds, there is good news. Stephon Tuitt should be undergoing surgery in about a week. Just how important is that single screw to the healing process? According that the same study, only one out of nineteen patients who underwent surgery (5%) was considered a treatment failure.

The odds look to be in favor of Tuitt making a full recovery eventually, but there is still a huge uphill battle coming for the former Golden Domer. Tuitt worked hard to drop somewhere in the ball park of 20-30 pounds prior to the combine, and the physical stress of such an effort likely contributed to the fracture in the first place. Going back to last off season, many attribute Tuitt’s weight gain from roughly 300 pounds in 2012 to 320(ish) pounds in 2013 to recovery from surgery on a sports hernia that impacted both his ability to train and play at the level that was expected of him. With yet another injury that will likely heavily restrict his ability to train for the next few months, Tuitt could be looking at yet another long road back to dominance if his weight becomes an issue again.

There is talk of a personal pro-day for Tuitt to be held sometime immediately before the draft, but it is likely that such an event would only be treated as pretty much a glorified medical checkup. Tuitt’s athletic testing would probably be well below his full capability considering his lack of time to train, but as long as he shows that he can run again without his foot becoming a chronic issue, teams might be willing to take a chance on the standout former Irishman. Going out that far on a limb for a defensive end who has been injured for virtually the past year and a half straight will be tough for a lot of teams, but the talent displayed during Notre Dame’s 2012 National Title game run might just be enticing enough to preserve Tuitt’s draft stock. Considering that these very same issues might serve as a death nail for a lot of other lesser prospects, the fact that Tuitt still has a decent shot at going in the first two rounds should speak volumes about what kind of potential he still possesses.

At the end of the day, we’re still talking about a 6’5", 300 pound man with heavy hands and an unnatural edge rush ability for his girth. No matter how jacked up his foot may or may not be at this point in time, Tuitt is still a rare breed.  I think I speak for football fans everywhere when I wish him well in his recovery.