Capt Ron continues this BRB series that explores the history of the coaches who will lead the Houston Texans franchise in 2014.

Welcome back! Next up is a brief review of Jim Bernhardt, who has been a mentor and key adviser to Bill O'Brien throughout O'Brien's coaching career. 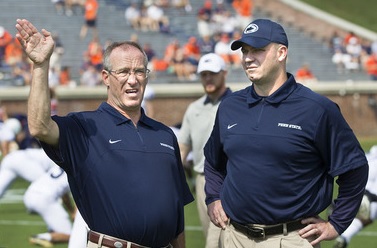 2014 Houston Texans: (Official role yet to be announced)

Over the last twenty-five years, Bernhardt has been a head football coach for several high schools and a position coach/coordinator in college at Hofstra, Brown and UCF. His long friendship with Bill O'Brien led to a unique non-coaching role the last two years at Penn State, where he acted as a key adviser and special assistant.

Bernhardt was a strong influence for Bill O'Brien early on. He coached O'Brien when O'Brien played linebacker at Brown University. When Bill said he wanted to get into coaching football, Jim was the catalyst.

Jim Bernhardt's friendship with fellow Long Island native George O'Leary provided the first big break for O'Brien. When Bernhardt was the defensive coordinator at Brown and O'Leary was the head coach at Georgia Tech, George was looking for an apprentice to groom as he rebuilt the Yellow Jackets program.

"George called Jimmy," O'Brien said, "and said, 'You got anybody smart enough to get into Georgia Tech graduate school and dumb enough to want to be a coach?"

This recommendation of Bernhardt to O'Leary was a major developmental step for Bill O'Brien's career, as Bill spent eight seasons coaching at Georgia Tech.

"The best thing I learned from George is his ability to organize," O'Brien said. "Number two -- probably 1A, 1B -- is his ability to create a mentally tough football team. We practiced hard there. He was so demanding on those guys, both on and off the field, that when we played on Saturdays, we played tough."

Jim Bernhardt would join up again with his friend O'Leary years later at UCF, during the time O'Brien worked for the Patriots under Belichick. Jim then reunited with O'Brien at Penn State to be his "right hand man."

"It’s a vital position for me," O’Brien said in a recent interview. "You have to have somebody who can come in here and critique you. Who is critiquing the head coach? Jimmy is critiquing me on a day-to-day basis, and not just critiquing me but critiquing the program in a constructive way. He critiques me on X's and O's, on motivational things, overall recruiting ideas," O’Brien said. "It’s maybe something in the weight room, something structurally in this facility. He helps make the schedule." - PennLive.com

Jim Bernhardt's role with the Texans has not been officially announced, so I have him penciled in as "Assistant Head Coach" for now. We might also call him the "Coach Whisperer" given his positive influence on O'Brien through O'Brien's career. Bill, like most NFL head coaches, is surrounding himself with people he can trust.

As we head into the draft of 2014, you have to wonder if their close ties with UCF head coach George O'Leary have Bernhardt and O'Brien digging deeper into quarterback Blake Bortles. We should at least trust that they will get truthful opinions from that longtime friendship as the Texans build their draft board.

Here is a snapshot of where things stand today:

This is still unofficial, and we'll update it as things become more clear.

What do you think of O'Brien having an adviser like Bernhardt? Would Gary Kubiak have benefited from a similar "right hand man" during his time here? Do you think their ties to UCF and O'Leary will have them lean toward Bortles at all in the draft, or is it still a dead heat between Teddy Bridgewater and Jadeveon lowney at this point prior to the NFL Combine?