Capt Ron continues this BRB series that previews the coaches who will lead the Houston Texans franchise in 2014. Next up is quarterbacks coach George Godsey.

There is still great uncertainty as to who will be the quarterback under center for your Houston Texans' offense in 2014, but at least we know the name of the position coach who will be in his ear day in and day out.

Godsey was born in North Carolina; and hails from a strong football family, as his father and two brothers both played college football. His father played for legendary coach Bear Bryant at Alabama. His older brother Greg played for The Air Force Academy, and his younger brother Gary played quarterback and tight end at Notre Dame. 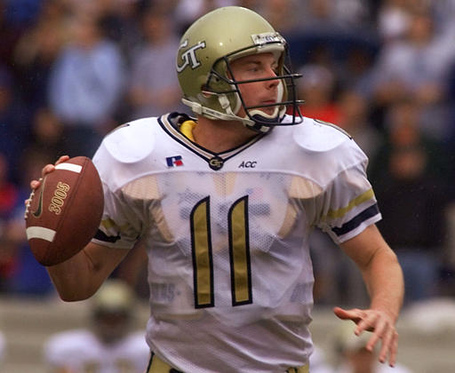 Godsey started his coaching career by joining his old head coach from Georgia Tech when George O'Leary took over the Knights' football program at UCF. He was there for seven seasons, assigned to coach quarterbacks and running backs. In that time, he helped guide the Knights to two Conference USA championships, as well as the school's first bowl victory with a 10-6 win over Georgia in the AutoZone Liberty Bowl.

In 2011, Godsey reunited with Bill O'Brien, joining the New England Patriots as an offensive assistant. That year, the Patriots led the AFC in scoring, third best in the NFL, with 32.1 points per game. The Patriots also ranked second in the NFL in total offense, averaging 428 yards per game. They finished the regular season 13-3 and were the top seed in the AFC before advancing to the Super Bowl.

O'Brien wanted Godsey to join him at Penn State, but Bill Belichick reportedly intervened to prevent it.

Godsey spent the last two seasons as the tight ends coach for the Patriots, where Rob Gronkowski earned a Pro Bowl spot in 2012 after scoring 11 touchdowns in 11 games played. Gronk also averaged a career-high 84.6 yards per game in 2013, a season in which he only played seven games due to injury.

After coaching running backs, tight ends and quarterbacks, Godsey has a very solid foundation of experience on the offensive side of the ball. It is highly likely that he is being groomed by Bill O'Brien to become the offensive coordinator, which may explain the "official" role remaining vacant on the Texans' current coaching roster.

So which quarterbacks will George Godsey be working with in 2014?

Current Texans include Matt Schaub, Case Keenum and T.J. Yates. It's possible that all three of these players are cut in the next few days after the team went 2-14 in 2013, a record earned mostly due to poor performance at the quarterback position. I think at the very least it is a forgone conclusion that Schaub will be released as early as tomorrow to give him time to try and find another team as free agency begins. If the Texans can't really find a starter from the free agent pool or rookie class, there is that slight possibility that Schaub stays with the Texans. I just don't see how that is possible under his current price / performance profile.

Capt Ron continues this BRB series that previews the coaches who will lead the Houston Texans franchise in 2014. Next up is linebackers coach Mike Vrabel.

Several free agent quarterbacks have been thrown around for the last couple of weeks as possible targets for the Texans, but they are being dismissed almost as quickly. Matt Cassel re-signed with the Vikings, so he is off the list of potential candidates. Ryan Mallett of the Patriots, Brock Osweiler of the Broncos, Brian Hoyer of the Browns, and Josh McCown of the Bears have all had their names thrown into the proverbial hat.

Or have they? Is this all just "noise" being generated to keep the potential trade partners for the first overall draft pick confused and anxious? Is this just a continuation of the Bill Belichick school of media manipulation O'Brien possibly brought with him from his days in New England? That gives me this mental image... 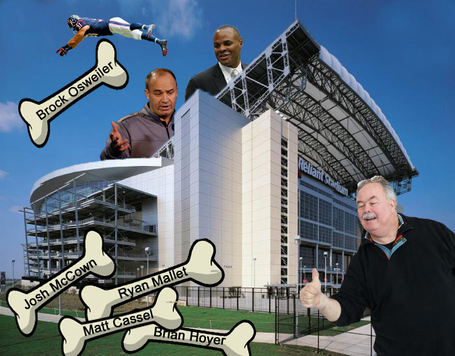 Draft prospect quarterbacks have also been the focus of several mock drafts linked to the Texans' plans for 2014. In no certain order, they include Teddy Bridgewater, Blake Bortles, Johnny Manziel, Derek Carr, Jimmy Garroppolo, A.J. McCarron, and Zach Mettenberger.

I'd love to know what the payout is for Vegas proposition bets to determine the trifecta of quarterbacks for the Texans this year under these circumstances.