Check out a summary of where each player who was eligible for unrestricted free agency on the 2013 Houston Texans has gone.

The Texans managed to be the last team in the NFL to sign any free agents in 2014, when they re-signed one of their own players three days after free agency began. Garrett Graham's new contract is for 3 years, worth $11.25M with $4.5M guaranteed. The rest of the Texans' free agents continue to explore the open market.

Prior to free agency officially beginning, the Texans signed tight end Zach Potter for an undisclosed amount. They also claimed OLB Ricky Sapp off of waivers in November when he was released by the Jets to make room for Ed Reed #Bamboozled. Sapp's contract is for 1 year and $730K. Not that those two events count toward 2014 free agency, but I list them as activities to help pad the action for an otherwise lethargic front office.

We'll update the signings, in Houston and elsewhere, in this post as free agency rolls on.

Players Signed By The Houston Texans In Free Agency:

2013 Houston Texans Players Signing With Other Teams In Free Agency: 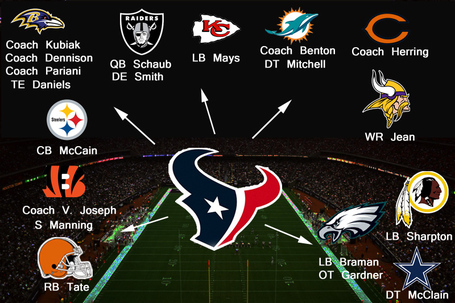 Sound off below with your thoughts, sense of relief, frustrations, shattered dreams, hopes and expectations as we churn our way through 2014 free agency.