Johnny Manziel chose not to throw at the NFL scouting combine, as did a few other quarterbacks like Teddy Bridgewater and A.J. McCarron. Manziel also chose to sit out of the scheduled A&M Pro Day a couple of weeks ago, but tomorrow the artiest formerly known as "Johnny Football" will finally unveil his well-scripted throwing talent in front of NFL coaches, scouts, and fans.

We have endured quite a build up to this day, including billboards around town. 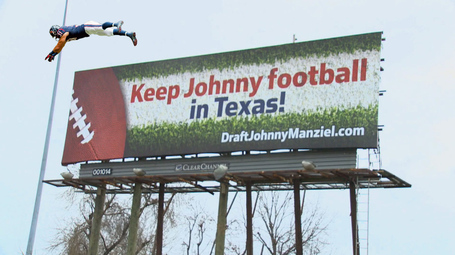 If that billboard and the rest of the efforts of the "hype machine" weren't enough to try and sell the Texans on drafting Johnny first overall, how about if the Texas Governor and a former President of the United States were to attend Johnny's workout tomorrow?

Charean Williams of the Fort Worth Star-Telegram is reporting that they will both be in attendance:

Gov. Perry and Pres. Bush 44 are among those expected at Manziel's pro day. Biggest pro day ever at A&M.

When Texans' General Manager Rick Smith was asked by the media if Manziel would NOT be a good fit in O'Brien's offensive system, he said:

"That's not an accurate statement at all,'' Smith said. "Bill O'Brien is a creative coach. He's an innovative coach. And if he had a guy like Johnny Manziel, he'd figure out a way to utilize his skills.''

It would be interesting to see what O'Brien could do with Manziel. The Texans enjoyed their fair share of air-superiority back when Kyle Shanahan was the Offensive Coordinator. After Shanahan departed for the Redskins, the Texans morphed into a run-first, clock-destroying ground game that was dominating at times, but somewhat boring to watch. When that system didn't work, it resembled a "run-run-draw-punt" machine that had fans clawing their eyes in frustration. If O'Brien were to install a strong and exciting passing game that can add the freelance nature of Manziel, it would be quite exciting and entertaining. Ensuring that it translates to consistently winning is the key, however.

"He's an exciting football player,'' Smith said. "And you see his style of play being employed in our league now."

O'Brien also talked with the media during the NFL owner's meetings in Orlando, FL earlier this week. His thoughts when asked about Manziel:

"Has he improved footwork-wise, throwing motion, knowledge of coverages?" O'Brien said. "You can see a lot in a pro day, but in a private workout, you're one-on-one, and the prospect is taking your instruction right from what you say. And he's doing things that you're going to have him do in your system, whether it's offense or defense."

On if O'Brien feels Johnny can fit a pro-style NFL system and be effective in the pocket:

"If you watch the Ole Miss game, he might have hurt his ankle early on and he came back. And he threw from the pocket in that game. If you watch him, he's going to be able to do a lot of different things. So, yeah, I think he's sustainable."

Manziel better make the most of his workout session tomorrow at A&M, because O'Brien didn't think the former Aggie would be visiting Kirby for another workout:

That makes sense if O'Brien gets what he needs in watching Manziel perform as well as meeting privately afterwards, which O'Brien did with Blake Bortles and Teddy Bridgewater. The way O'Brien phrased this sure seemed like he was taking a shot at the situation, where Manziel is holding his own personal scouting day instead of conforming to the previously organized Pro Day scheduled by A&M on March 5th. O'Brien has been very consistent that he is not a fan of the "individual star" and much prefers the "team" mentality. We'll see how that plays into things as we edge ever closer to the draft.

I hope he has a good day tomorrow, just like I hoped for all of the candidates the Texans are considering in this draft. I want to see these guys perform at their best so the Texans can get a good review completed and make a solid decision.