(Editor's Note: Since I haven't posted much this week, and my current BRO article is mired in writer's block, I thought this would be a relevant re-post. Enjoy.) Proudly distributing sensationalized rubbish since 2010. Battle Red Onion catches up with Matt Schaub, freshly traded to the Oakland Raiders, yet already feeling nostalgic.

OAKLAND, CA--- A little over a week has passed since Matt Schaub was traded to the Oakland Raiders for a sixth round draft choice, but the former Houston Texans quarterback is already pining for the city he called home for almost eight years. On Friday, Schaub told reporters outside a Jamba Juice in Oakland that what he missed most about Houston was the inescapable, sweltering humidity.

"It's three o'clock and I'm not even soaking through my shirt."

"Yeah, it's frustrating, to be honest," said the 11-year pro. "Anytime you pack up and move across the country, you expect there to be an adjustment, but I didn't think I'd miss the obnoxious heat so much." Schaub went on to add that the mild, sunny skies that make the Bay Area the envy of the country have actually forced his family to spend quality time together at parks, outdoor malls and restaurants with patios.

Schaub noted that his three young daughters actually seem to be enjoying the constant highs in the lower 80s with cool breezes out of the west courtesy of scenic San Francisco Bay. "Not me, though," said Schaub, who then opened the backpack he was carrying and showed reporters what appeared to be a full change of clothing. "What am I supposed to do with this now?" he said, clutching a pair of socks, holding them over his head. "It's three o'clock and I'm not even soaking through my shirt." 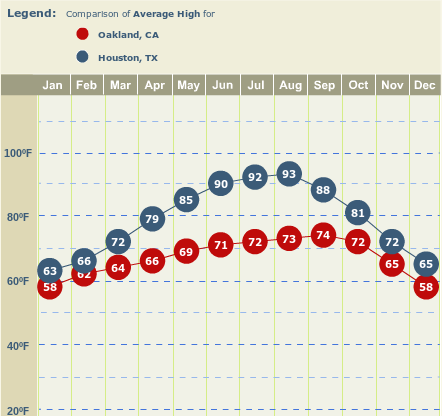 When told that Oakland's humidity was likely very similar to that of Houston because of its proximity to bodies of water, the former Virginia Cavalier scoffed. "Well, that may be true, but all I can tell you is that it doesn't feel like there's a gaseous swamp in my shorts right now, " he said, pointing to his shorts. "So you do the math."

The difference in average highs between Houston and Oakland (pictured right)-- which can be as much as 20 degrees in the summer-- is the culprit. Unfortunately for the homesick NFL signal-caller, there will be little relief in the coming months as Oakland's temperatures are expected to stay fairly steady throughout the year before dipping in the winter.

Schaub told reporters that when he's feeling especially nostalgic, he drives through the city looking for rush hour traffic while blasting the heater of his Yukon Denali. "It feels like I'm home in Houston," Schaub said with a smile.

"Look, I just miss that feeling of walking outside and having it feel like everyone else's sweat is swirling through the air around me," he lamented, shaking his head before walking away from the throng of reporters. He added that he and his wife Laurie will probably save thousands of dollars a year by not setting their air conditioner to unreachable temperatures every day.