In the midst of completing player evaluations under the new coaching staff and preparing draft boards, your Houston Texans have their sites aimed at the defensive secondary. The crosshairs are currently fixed on Danieal Manning.

With yesterday's signing of former Dolphins safety Chris Clemons, your Houston Texans have applied strategic leverage in their contract discussions with Danieal Manning. The Texans also recently signed Kendrick Lewis, a former safety for the Kansas City Chiefs. It seems clear that the front office is focused on addressing the defensive secondary after the team showed lack of depth at safety, and gave up far too many big plays in recent seasons.

Manning's agent, Russell Hicks, said the talks have been "very amicable" in trying to find middle ground on a new contract:

"He would be willing to take a pay cut,but not the amount they’ve asked him to take. He’s willing to do something to take one for the team and help them save some cap space. The numbers, where we are and where they are, there’s just a difference right now. Hopefully, we can meet at some middle ground and move forward. They said they did not want him to leave. They made that more than clear. They need to save some money cap-wise and they’re looking at him."

Manning is in the last year of a four year, $20 million contract signed in 2011. The deal contains $9 million guaranteed, including a $6 million signing bonus. For 2014, Manning's salary is $4.5 million, and his contract counts $6 million against the Texans' cap when you factor in the $1.5 million remaining carryover of the signing bonus.

In 2011, the Texans signed Manning after he played five seasons with the Chicago Bears, and he immediately bolstered the defensive secondary. He also excels in kick returns when given the opportunity, although he was used sparingly to limit the risk of injury as a key starter and veteran leader on defense. That being said, he has suffered two injuries in his three seasons with the Texans.

In 2011, he suffered a broken leg and missed games 8, 9, 10 before returning to the starting role for game 11 after the bye week. He didn't miss any time in the 2012 season, but in 2013 he was put on injured reserve after suffering a severe injury in the 6th game of the season against the Rams when he hyper-extended his knee.

Former players like Ted Johnson, and Seth Payne of SportsRadio 610 often talk about how teams will approach players after they are injured and ask them to take pay cuts. It's just part of the business when there is risk that the player may not perform at the same level after the injury. Admittedly, that wasn't true for quarterback Matt Schaub, who was offered a generous contract after his Lisfranc injury in 2011. It also wasn't true for linebacker Brian Cushing, who suffered a torn ACL in 2012; but the contract he signed in 2013 does include significant protection for the team by using performance and roster bonuses in the event he is unable to perform.

Compare those numbers with the other two safeties the Texans have signed in free agency...

Before we get too excited about the Clemons signing, consider what a local sports radio host in Miami had to say about him.

Orlando Alzugaray, 640 Sports in Miami, joined The B-Straw and Pauly G Show to discuss the Chris Clemons signing. Alzugaray is not high on the new Texan. He says he might be good for competition but thinks it would be a bad idea for the Texans to start him. - houston.cbslocal.com

When asked what the Texans are getting in Chris Clemons:

Alzugaray said, "A mediocre [safety] who takes bad angles and is not very good back there. He's a nice kid, but he's not much of a football player. He was up for free agency last year, and nobody wanted him. And [Miami Dolphins' GM] Jeff Ireland, who is a moron, brought him back for a year. He just makes no plays. Miami doesn't have a good free safety, and they let him go. That tells you all you need to know."

You can listen to this full interview on SR610 by clicking HERE. Overall, it wasn't a stunning endorsement, and it has me worried that our safety situation is no better than it was when we had Shiloh Keo starting out there last season. While I am glad the Texans are at least addressing the safety position, I'm not completely confident that we have the "ball hawk" that is truly needed in today's pass-heavy NFL.

What I do know is that the Texans gave up WAY too many big plays due to limited safety performance in supporting cornerbacks Johnathan Joseph and Kareem Jackson. They are both above-average NFL corners, but they need support over the top. This is especially true when you face players like T.Y. Hilton twice a year.

It wouldn't be an article about safeties if we failed to have a pick of "Flying Keo" in it. Today we have him participating in the "ESCAPE From Alcatraz Triathlon" to entertain you this weekend. This one is for you, BFD! 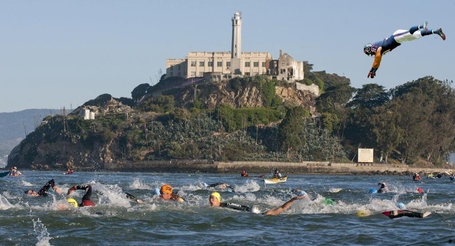 So the good news is that Rick Smith and the gang are addressing the safety position. The bad news is we don't really know if it has actually been improved yet, so keep that bleach handy for now. I hope they find a way to keep Danieal Manning on the roster.

Sound off below with your thoughts, concerns, hopes and dreams as we grind through the NFL offseason.