Captain Ron reviews the latest film from Hollywood that portrays an NFL general manager, played by Kevin Costner, who navigates through one crisis after another on the first day of the NFL draft.

My recommendation? It's worth seeing if you are willing to check reality at the door, and just sit back and be entertained by official NFL logo'd venues while Kevin Costner does his thing on the big screen. This isn't HBO's "Hard Knocks" with actual owners, GMs, coaches and players in behind the scenes footage. This is Hollywood spinning an unbelievable story, that mostly has you shaking your head several times, yet pumping your fist in agreement at other (even predictable) key moments.

Before we get started with the review, please note that there will be soft-spoilers in this article. I won't say anything to blow the critical suspense points in the film for anyone who hasn't seen it yet, but I will discuss some of the plot-points that develop the story. These plot-points are all revealed within the first ten minutes of the movie, so it's not like I'm going to wreck the whole story for you. Please return later to this article after you see the film if you want to avoid ALL spoiler discussions.

The New York Jets withdrew participation from the film after reading the script, since it included a core story of a QB controversy of a veteran starter under scrutiny and a potential QB as a first round pick in the fictional draft.  The Jets didn't want to draw even more attention on that topic that was playing out real time for them (at the time of the film's production) between veteran Mark Sanchez and then rookie Geno Smith.

The director of the movie, Ivan Reitman, offered these quotes in a recent interview on Sports Radio 610 starts at 5:06:

Reitman said; "There was a very funny story where Denis Leary was talking to Bill Belichick about coaching tips and getting into that [head coach role]. Belichick read the script and said; 'How did you hear about the $100 story?'" Reitman continued with; "It's a story of how he [Belichick] used to put a $100 bill in the back of the playbook to check to see if their prospective draftees had read the whole book. And we tell it in the picture." 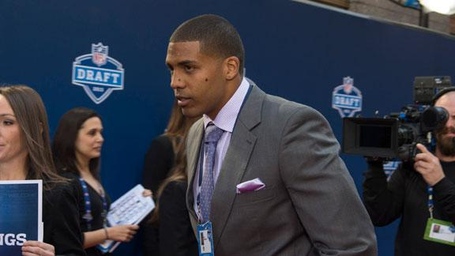 Reitman said; "When we were at the actual draft last year, when we shot at Radio City; we got to go in this procession of SUV's that arrive at the red carpet and each player gets announced in front of the real crowd in New York. We put our own draftees in front of that procession. As Arian Foster was stepping out, I could see that he was emotional. I could see it in his eyes. I turned to him and I said; 'What's up?' and he [Foster] said; 'You know I never got drafted.'"

Reitman continued with; "I didn't know his background, until he talked to me. That he fought his way onto the practice squad, and then fought his way onto the team. He [Foster] said; 'This is my draft. I never got to come here and be part of it.' Reitman said about Arian Foster; "He was so proud when he walked across the stage to get a jersey from Roger Goodell. It was great!"

That is really touching about Foster's experience during the shooting of the film. I can only imagine how it must have felt to be there portraying a top draft prospect in a movie, when in reality you were undrafted and battled your way to stardom.

Why it was an enjoyable movie:

It was entertaining, and captured the stress and anticipation of the first round of the draft. I appreciated the NFL cooperating with the inclusion of Commissioner Roger Goodell, actual facilities, logos, etc. Using actual NFL teams made this film more interesting. I assume the NFL agreed to do this, because it will likely help to boost ratings for the upcoming real draft.

Costner did a good job in the role of an NFL general manager. They also gave him a character that had legacy ties to the film's Cleveland Browns, so it helped develop the significance of his decisions through the story. Overall, he made the movie better due to his charisma and ability to perform on screen.

The NFL teams and cities included in the film were not the usual overexposed top five dynasties loaded with national bandwagon fans.  Instead, the film included coverage of the Cleveland Browns, Seattle Seahawks, Houston Texans, Kansas City Chiefs, and Jacksonville Jaguars.  It was very cool to see several aerial shots of the stadiums and city skylines for the teams in the story.  I also think they did a great job showcasing the history of the Browns, and their struggle to rebuild after getting screwed over by the owner and team that fled to Baltimore.  That's an event that former Oiler's fans can empathize with after what Bud Adams did to Houston. 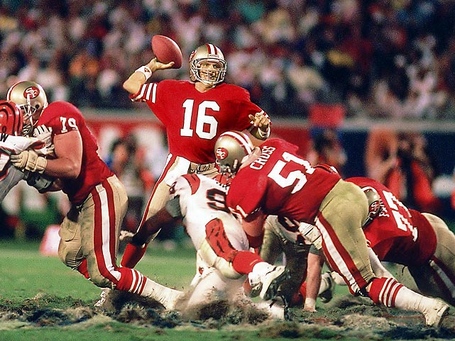 They included a story, and footage, of the 1989 Super Bowl XXIII when Joe Montana led a comeback for the 49ers. To get the offense to relax under the stress of the situation, he calmed the team's nerves by pointing out Canadian comedian John Candy in the stands. Down by 3 points, Montana then went on to complete 8-of-9 passes on an 11-play 92-yard drive that ended with a 10-yard touchdown strike to John Taylor with 34 seconds left to win the Super Bowl. That is easily one of the greatest moments in NFL history.

The interaction with player's agents and top prospects provided some creative insight to the negotiating process. The background checking and investigative process was very compelling to see how that can affect the decisions of the front office. I think they did a reasonable job showing the negotiating tactics used by GM's, and how more engagements result in futility rather than friendly collaboration.

An oppressive and demanding billionaire owner, played by Frank Langella, was an excellent representation of some tyrants who have owned, and still own, NFL teams.

In the end, I loved how the GM came to the decision he did about his first draft pick. I also loved the creativity, no matter how far fetched, in creating and exploiting opportunities for his team. We could only dream of having a GM like this in real life.

Where they could have done better:

The trades involved in the film were unrealistic, although they did provide for the necessary suspense. It was the obvious reminder that this was a product of Hollywood, and not the NFL.

The lack of an actual draft board with player rankings made this a bit too silly. There also isn't enough time in the day to accomplish all that they did, but again, that's to be expected from "Tinseltown." This would have been more believable if they spread the story out over the week leading up to the first day of the draft.

The additional stress and drama in the story for the main character was really unnecessary. Sonny Weaver, Jr (Kevin Costner) is dealing with far too many life issues at one time:

The GM recently fired his legendary father, who was the long-time head coach of the team, and then he just happened to die the week before the draft. Sure this bad timing can happen, but the impact wasn't represented in the story as effectively as it should have been.

His secret affair with one of his executives who manages the team's salary cap, played by Jennifer Garner, was fine in terms of story development. What was wrong was her timing to announce their pregnancy the morning of the draft. That's a topic worth holding a few days for a couple facing the most important weekend of the year for both of their respective careers.

If you like Kevin Costner's acting, you will likely enjoy this film. If you are dying for any entertainment related to football, then you will probably enjoy this movie.

So are you interesting in seeing this? Have you already seen it? Weigh in below with your thoughts, and enjoy your weekend BRB!