With just three weeks before your Houston Texans are on the official clock in the 2014 NFL draft, we are taking the pulse of the fans here at BRB on what you think will likely be done with that first overall pick.

Imagine if you will, that you find yourself drifting in and out of consciousness on your couch while voices from NFL Network fade in and out in the background. Analysts and sports broadcasting pundits can be heard arguing back and forth about the latest news of the top players and their projections in the upcoming draft.

Suddenly, it's Thursday, May 8th. The lights are bright in Radio City Music Hall in New York City, and the energy of the whole venue is electric in anticipation of what is about to transpire. A fleet of SUVs have already delivered the VIP attendees, which include several top draft prospects and NFL owners. Team representatives have taken their assigned seats, and the phones at their respective tables are already being worked like the often riotous scenes a few miles south on Wall Street. Draft boards are ready, trade hot-sheets have been checked and rechecked. Speed-dial numbers of agents, general managers, and players have all been programmed and are at the ready.

After writing an emotional and profound essay of your love for the game of football, you have been selected in a rare opportunity as the team ambassador for the Houston Texans. Your job at this event is to act as courier to deliver the team's draft selection card to the NFL official. Nervousness takes control, and you rub your hands to stop them from shaking. You wipe them against your pants in an effort to remove the sweat that keeps forming. Earlier in the day you were exploring Times Square and Jimmy Fallon's set at NBC Studios just a few blocks away; that Reuben sandwich you ate near the plaza is now starting to kick up into your throat.

Seconds before you are about to dash to the nearest restroom, an usher comes up and directs you to the Texans' table. They hand you the official selection card, and you spin around to sprint toward the delivery point on the left side of the stage. Roger Goodell can be seen talking to someone behind the partition as he prepares to go back to the podium to announce the selection. As you approach the outstretched hand of the NFL official, you look down and see what is written. It says? 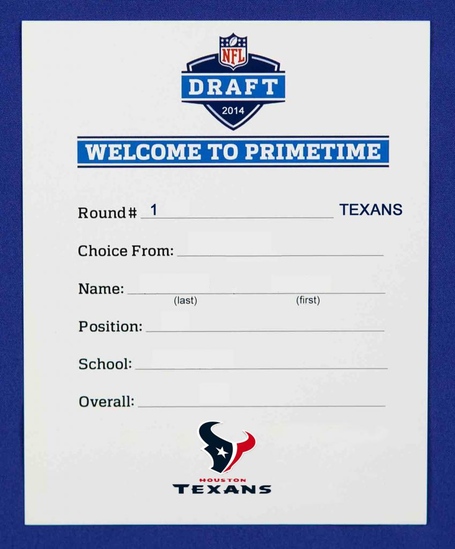 Weigh in below with what you think the Texans will actually do with the first overall pick in the draft and why.