Anatomy Of A Great Route: How Andre Johnson Is Molding DeAndre Hopkins Into A Monster

Texans former first round pick DeAndre Hopkins may not have had the flash of Tavon Austin or the spectacular production of Keenan Allen, but he might already be the most dangerous weapon in the 2013 class. Read on and find out how the next Andre Johnson could already be in H-Town.

Share All sharing options for: Anatomy Of A Great Route: How Andre Johnson Is Molding DeAndre Hopkins Into A Monster

Everyone knows Andre Johnson is big, fast, and catches everything in his zip code. What everyone does not know, however, is that Johnson is also one of the greatest route runners to ever play the game. While Jerry Rice set unbreakable records by making every release and every cut look exactly the same on a snap-to-snap basis, Andre Johnson wins by making every route look maddeningly different. Unlike Rice, who would keep defenders guessing by not tipping his route until the last possible step, Johnson claims his victims by fooling his opponents into jumping at the wrong tipped route in the first place. A quick-footed dancer of the highest caliber, Johnson’s proficiency at stringing together multiple decoy routes into single packages has caused defenders’ heads to collectively spin for over a decade.

Some of Johnson’s finest work of the 2013 season came against the deservedly vaunted Richard Sherman and the Seattle Seahawks secondary. While 'Dre did have a fairly typical outing of nine catches for 110 yards, Johnson really turned heads (literally) in the final minutes of the fourth quarter. Lined up against the Big Bad Wolf himself, Johnson was tasked with beating Sherman on a deep out to kick start the Texans’ potentially game-winning drive. Take a look below.

Let’s break down this route frame by frame to really appreciate the football artistry taking place. The red line represents Johnson’s intended route before the snap. Starting by giving a quick jab inside to (ideally) widen Sherman away from the sideline and create space, Johnson then wanted to work back into that space with as little contact as possible. After clearing the legal five yard contact area, Johnson wanted to ride Sherman slightly back inside to prevent himself from getting "squeezed out" of his route. Following getting pressure on Sherman with physicality to the inside, which is no easy task, Johnson next wanted to motor down, break, and "flatten" a yard back up field on his way to the sideline with Sherman’s momentum still going in the opposite direction. 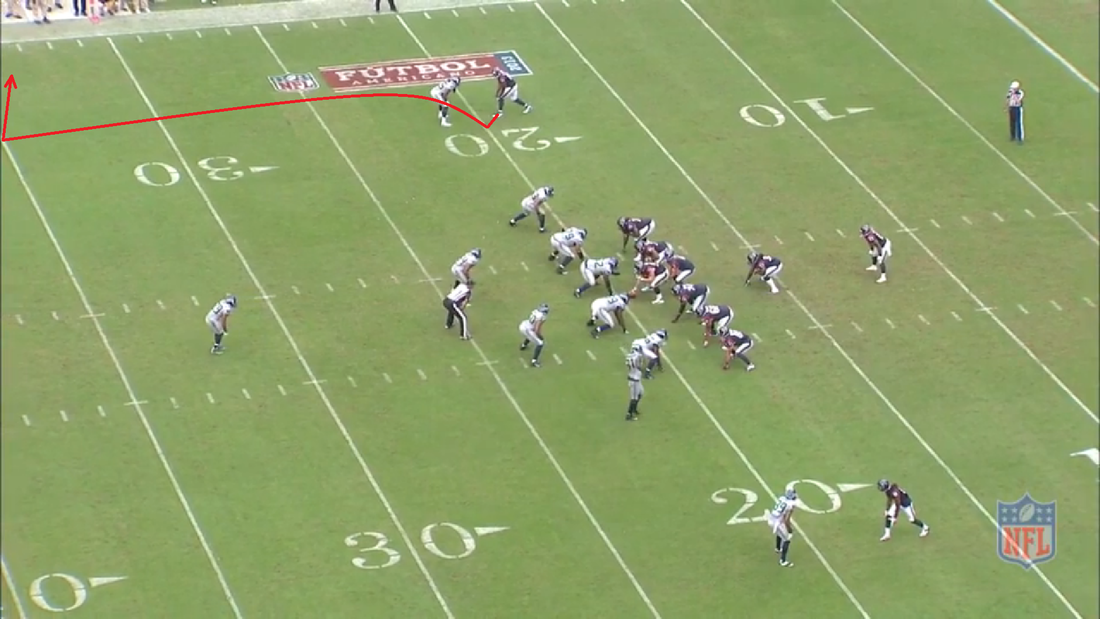 This technique is one of the more effective principles of route running called the "shoulder ride". Often used by bigger, more physical receivers like Anquan Boldin, Dez Bryant, and Calvin Johnson, the shoulder ride is a common technique used to gain separation through physics. Make the defender move in one direction, wall him off from your intended route with your own body, and then go the opposite way. The more difficult it is for the corner to plant and redirect through the receiver, the more likely a successful catch can be made. Here is a quick video detailing the shoulder ride concept.

Now let’s see what actually happened. Johnson starts off his route with the inside jab, but Sherman keeps his eyes locked on Johnson’s hips and does not bite. 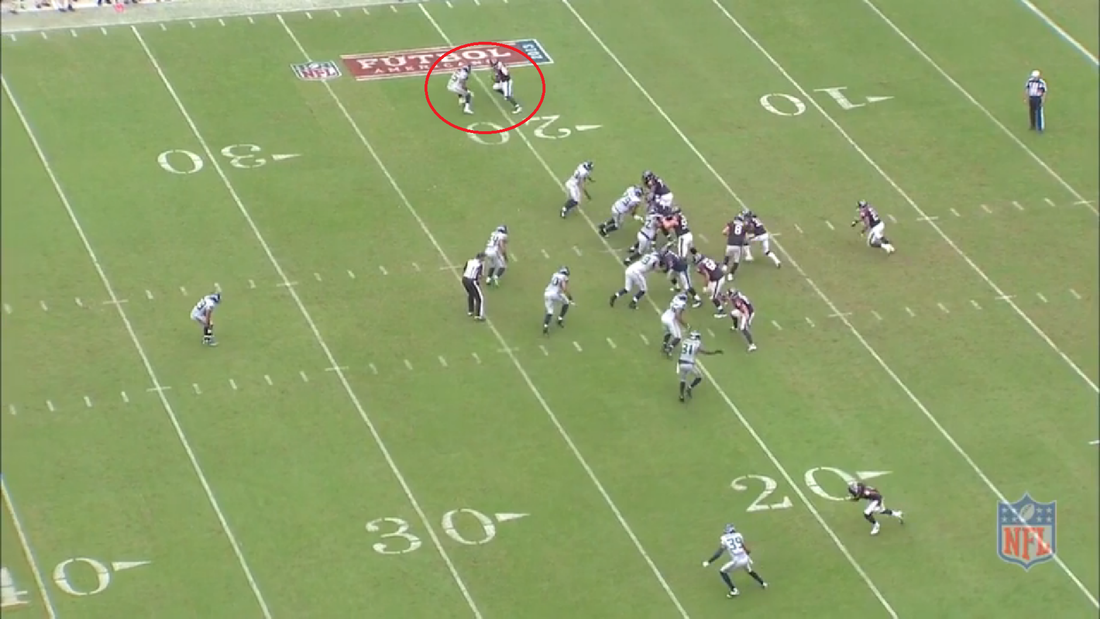 Rather than going for contact, Sherman starts to open his hips just a couple of strides into the route. This tells me that he is trying to position himself to "stack" on the route rather than sliding into a "trail" position on Johnson’s hip. 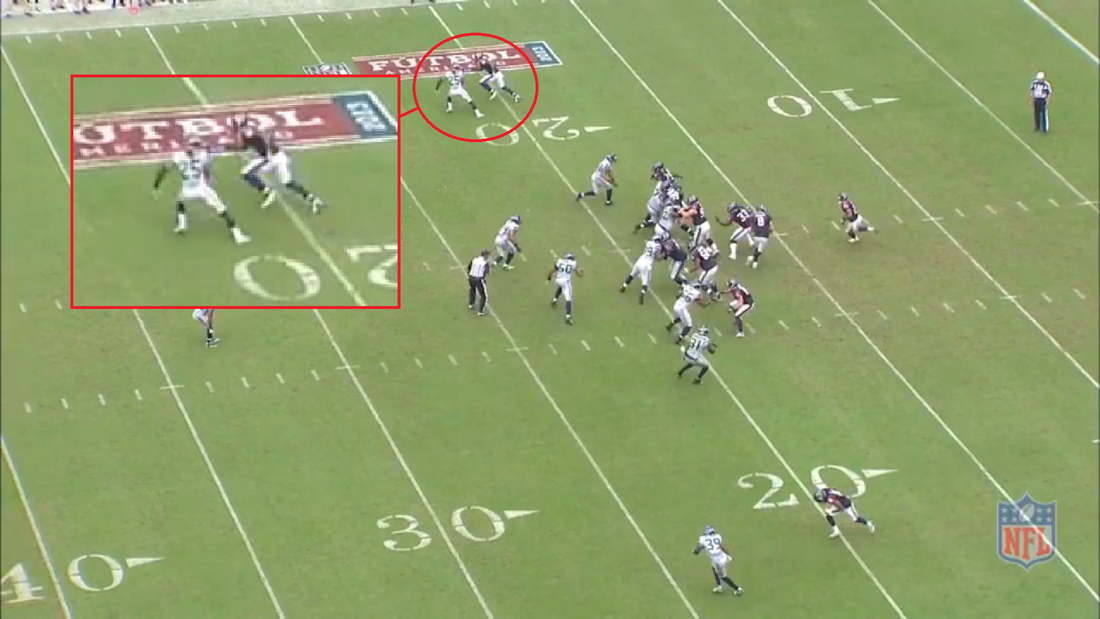 As seen below, Sherman gets over top of Johnson in an attempt to choke off the stem of the route and impede his progress down field. "Stacking" is a popular technique for corners in defenses that run a lot of Cover One and Cover Three because its primary vulnerabilities, secondary releases to the inside and come back routes back underneath, are covered with underneath linebackers and a safety in the middle of the field (circled in blue). With Sherman not on his hip, Johnson has to adjust his route to not only free himself to get down field in a timely fashion, but also to make Sherman get back inside so that he can break to the sideline uncontested as originally intended. 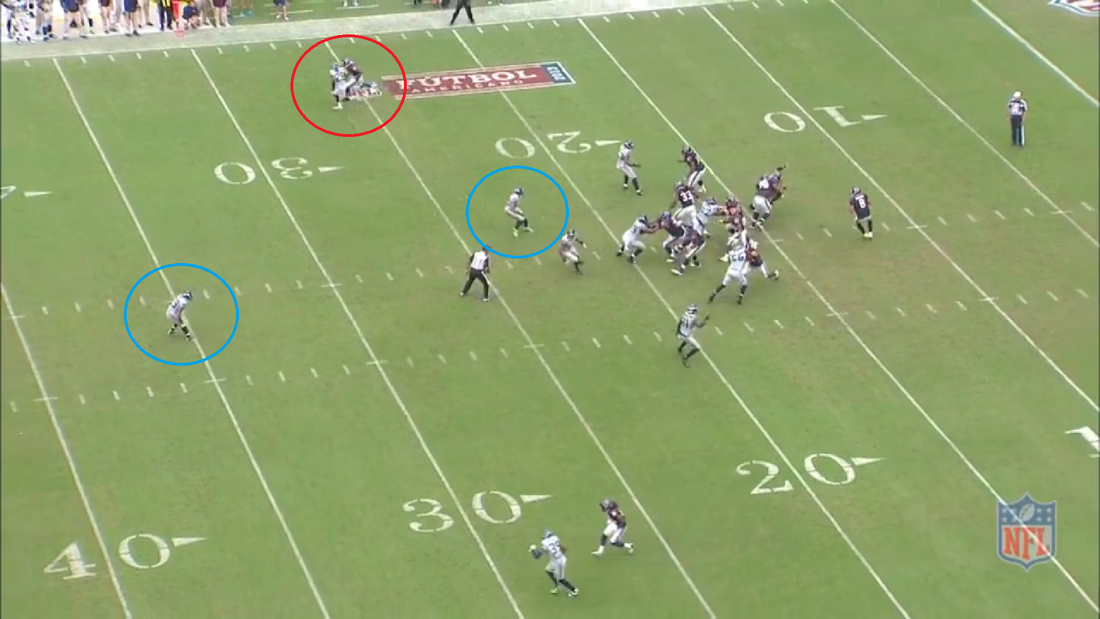 In order to get Sherman back to the spot that he wants, Johnson threatens a skinny post by slightly motoring down to cut back underneath Sherman to the inside. 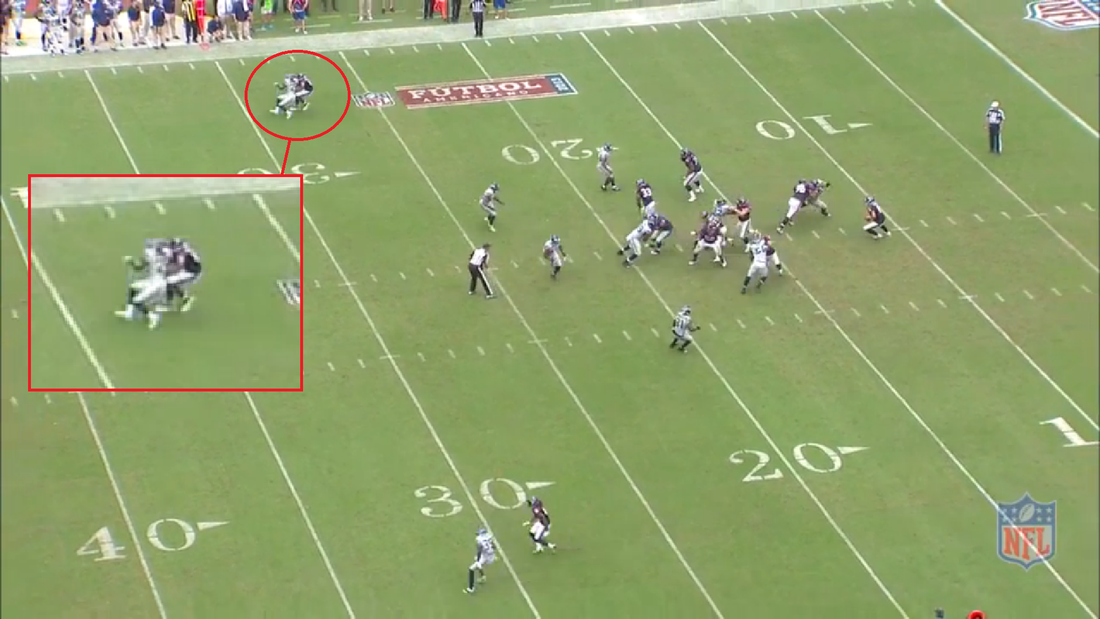 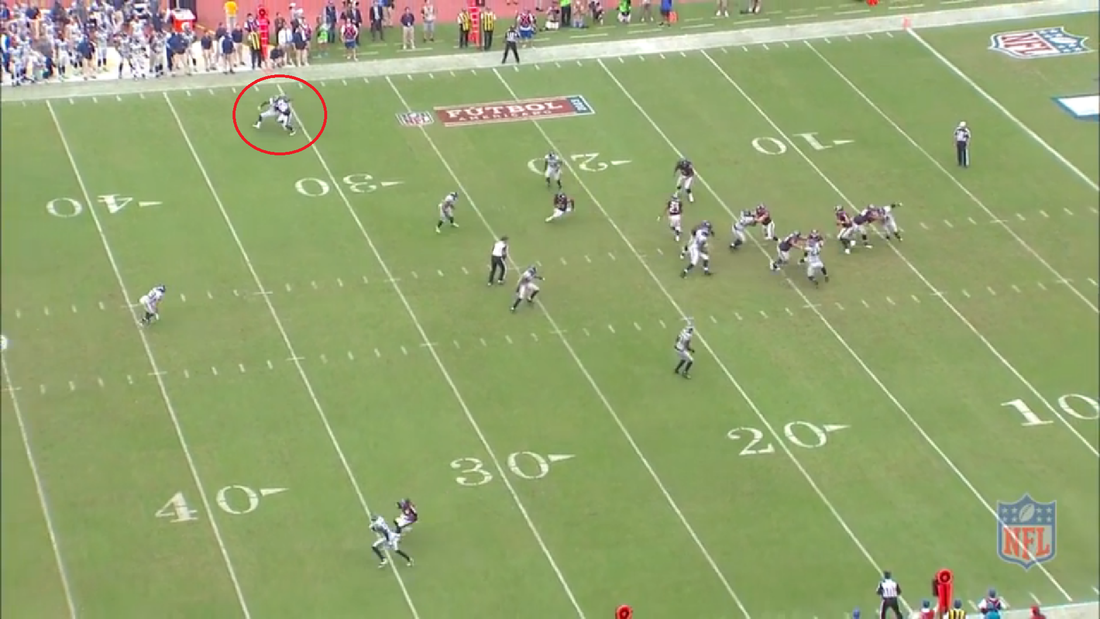 Now that Johnson is running free with good body positioning inside of Sherman, the real fun can begin. Sherman is forced into catch-up mode to play the skinny post because a deep reception in the number two seam would be the "worst case scenario" on this particular play. Once Sherman fully opens his stride to use his excellent makeup speed against the threat of the skinny post, his longer frame turns from an advantage to a disadvantage. 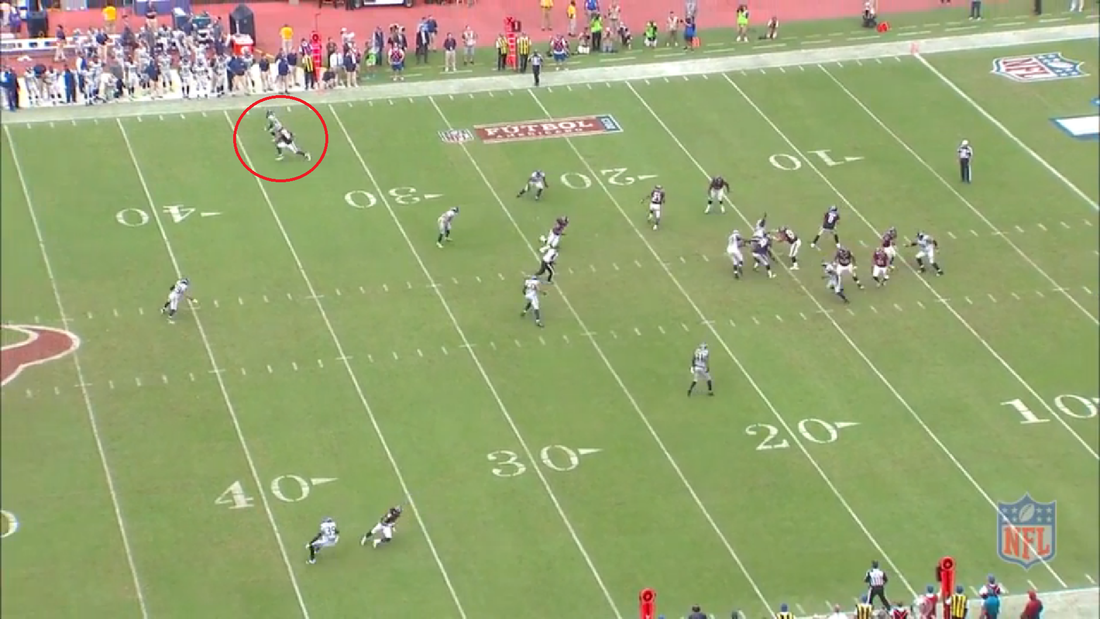 Johnson has Sherman’s hips turned vertical, and unfortunately for Sherman he does not have the foot quickness necessary to plant and close on such an absurdly gifted route runner. Chalk this one up to a future Hall of Famer teaching a lesson to one of the best youngsters in the game. 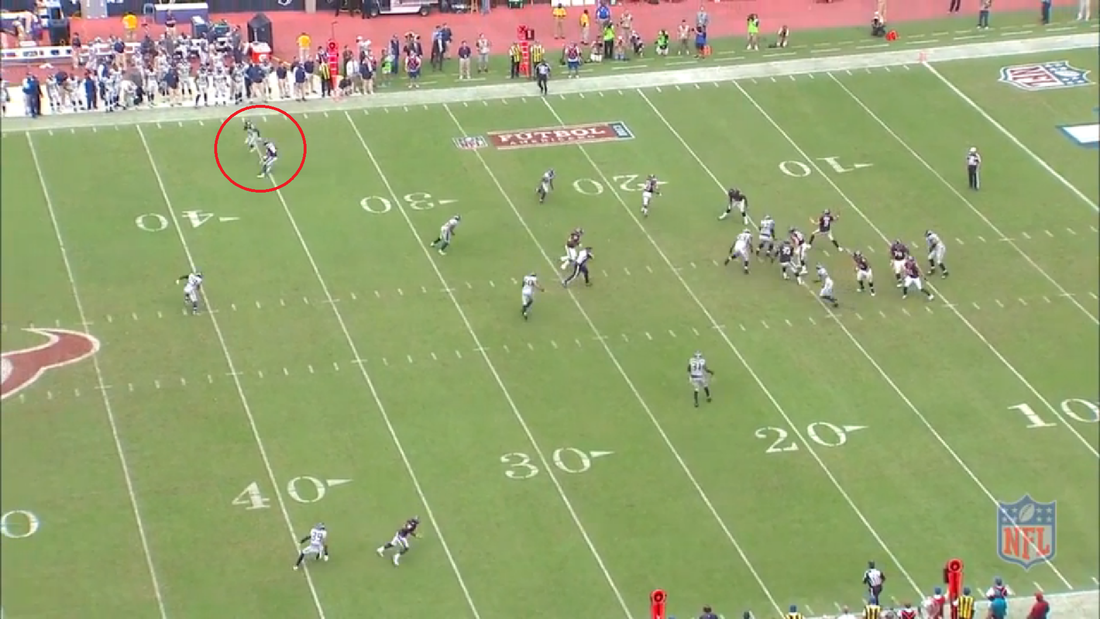 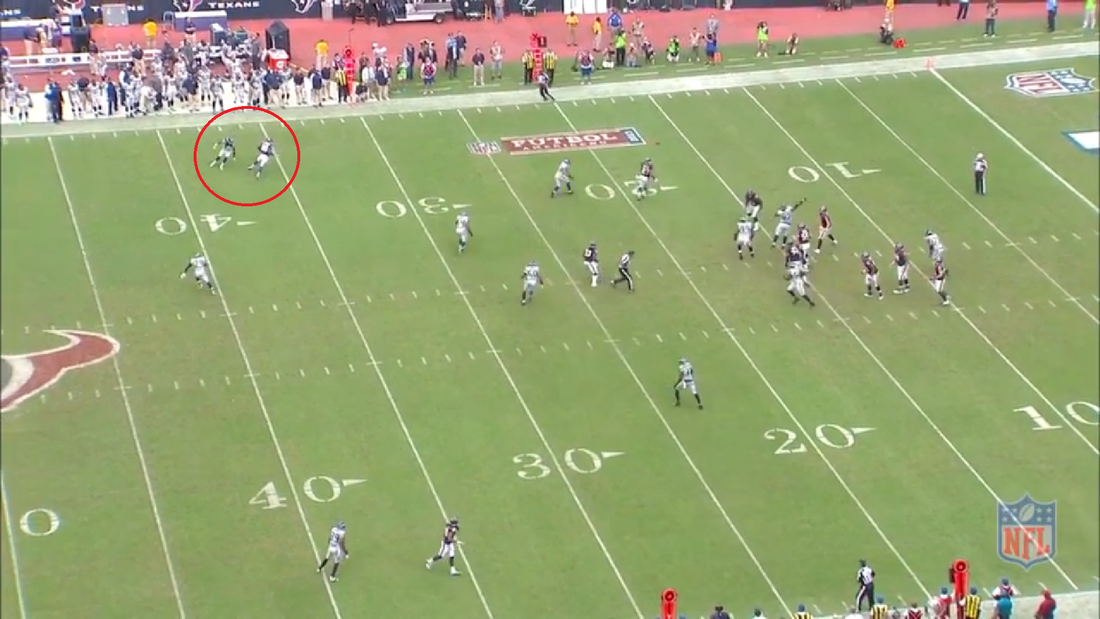 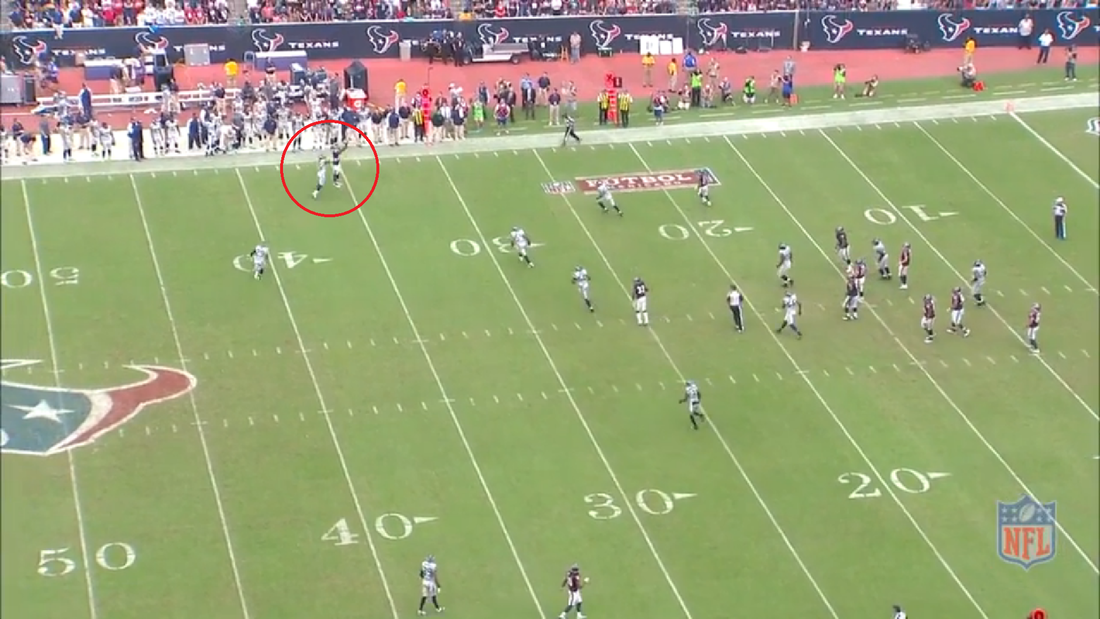 Speaking of one of the best youngsters in the game, Andre Johnson’s "okie-doke" style of route running seems to have rubbed off on Texans' 2013 first round pick DeAndre Hopkins. Take a look at Hopkins’ route at the bottom of the image during Andre Johnson’s battle with Sherman.

Notice any similarities? Go route – stutter – go route – break – come back. This is not just one move or one route, this is an all-out assault on Brandon Browner’s feet and hips. Hopkins, like Johnson, does not just want Browner to bite on one move; he wants Browner to bite on every move. By the time Hopkins makes his final break into the comeback route, he wants Browner to be so twisted around that the gigantic corner has no shot at making a play on the ball. There are a lot of longtime veterans who do not run routes like this, let alone rookies in the fourth game of their career. Hopkins’ awareness during his routes to know when he is winning, when he is losing, and when to change his approach in the middle of a loss to turn it into a win is rare. Browner found that out that hard way in the final minute of the fourth quarter when the young rookie beat his press for a nice 17 yard gain.

Again, let’s break this down frame by frame. This is the route that Hopkins intended to run--a quick jab to the sideline to get Browner to leave the inside release open, followed by a shoulder ride and snap to a flattened post route under the high safety. 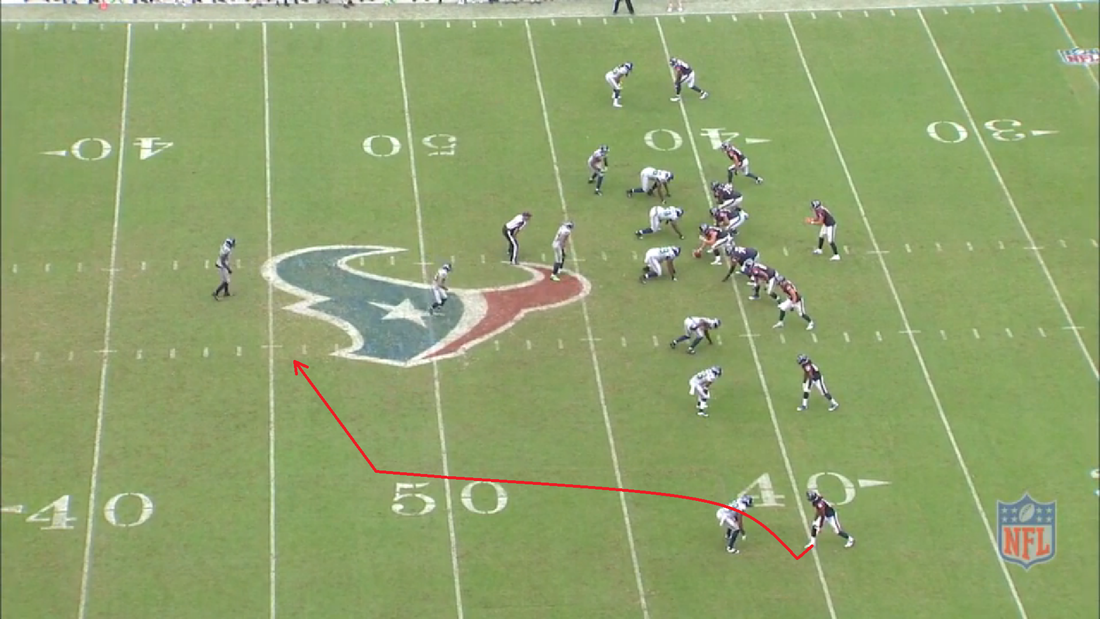 Hopkins jabs left and tries to cut back to the right. Like any press corner worth his salt, however, Browner smartly walls off the inside release and tries to force Hopkins outside towards the sideline. 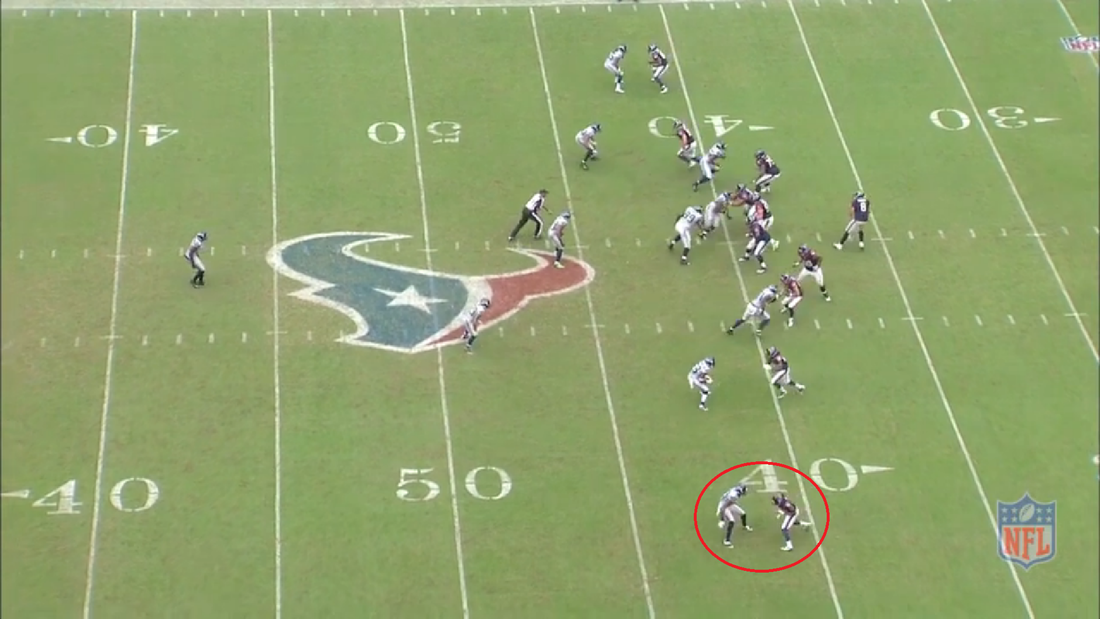 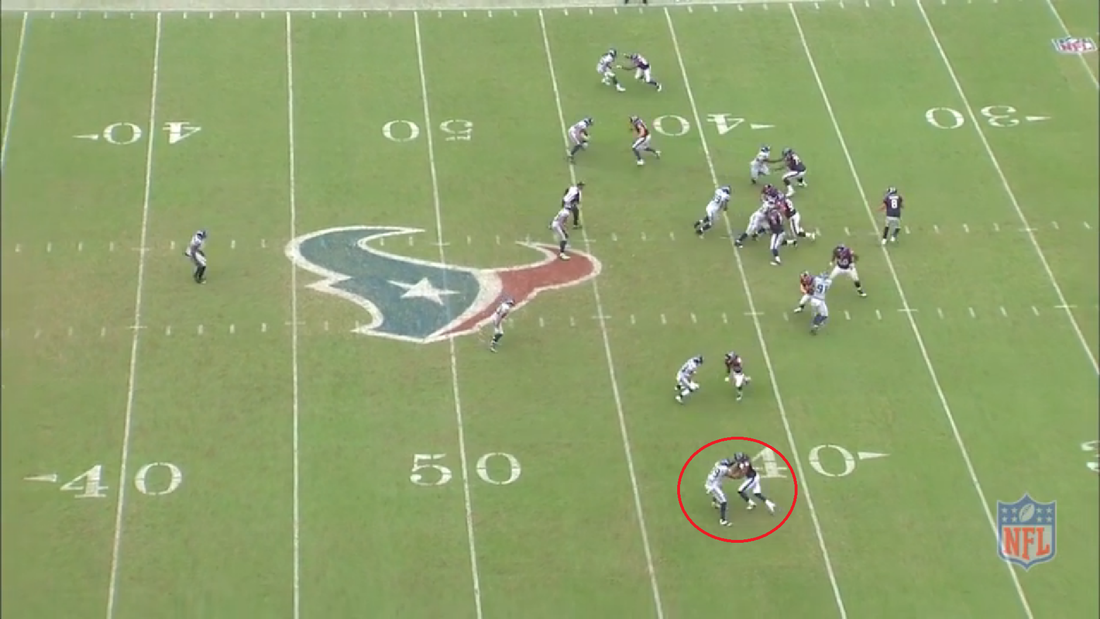 Hopkins, knowing he does not have time to find a way to run through a guy as big as Brandon Browner, concedes the inside and prepares a second attack deeper down field. 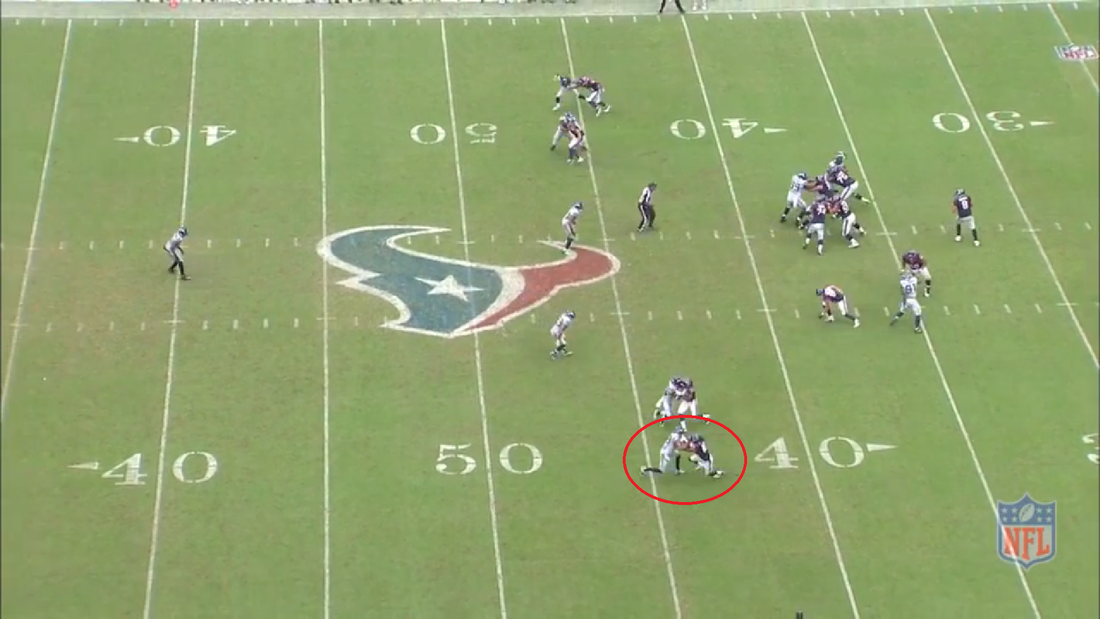 After being denied the inside, Hopkins widens his stem outside to get separation from Browner and force his hips to get vertical down the field. 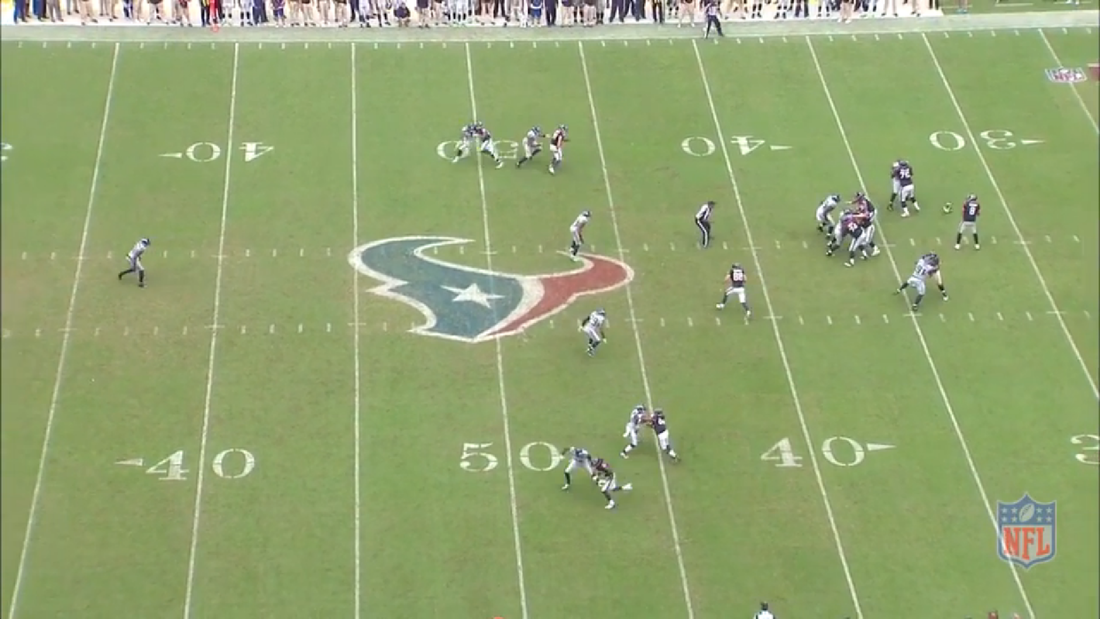 Browner is baited into flipping vertically to try to squeeze the route into the sideline, and that is when Hopkins springs the trap. "Nuk" decelerates and cuts back inside with suddenness that a lanky corner like Browner simply cannot match. The actual reception is almost a formality after his final cut. Just like in the shoulder ride, this route is all about manipulating the defender into going where you want him to go and then breaking in the opposite direction. 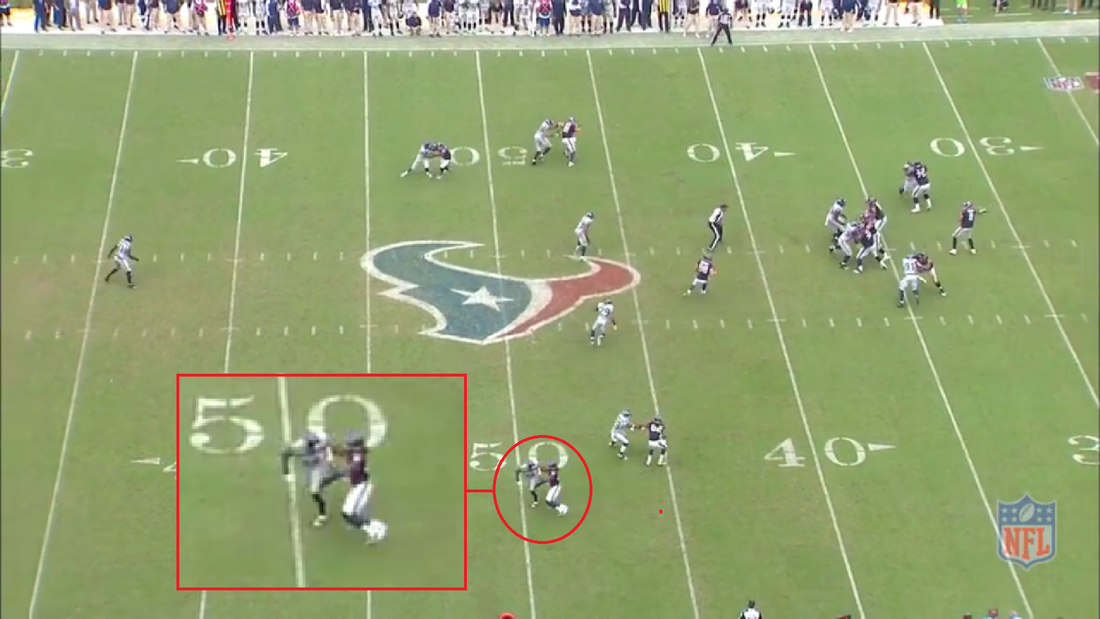 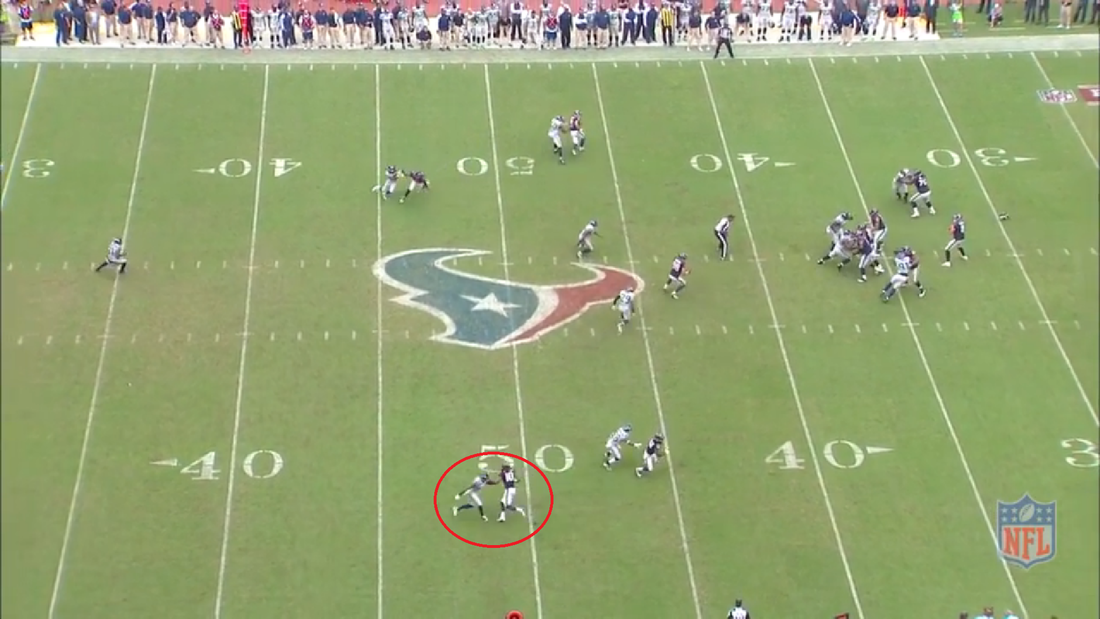 Hopkins, as he intended to from the beginning, gets to his spot on time. The original route may not have worked, but the intelligence, effort, and technical precision demonstrated here to make Plan B a success is what makes this play so impressive. The nifty diving grab did not hurt, either. 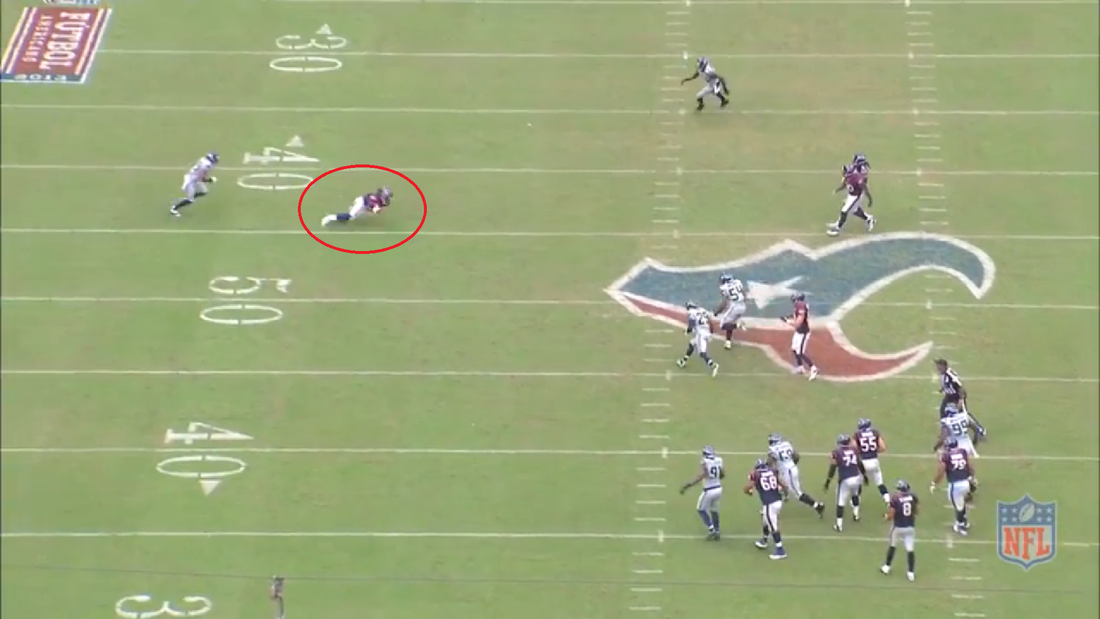 That was not the last stop for the DeAndre Hopkins Express, however. A few short minutes later in overtime, Hopkins would use his previous victory over Browner to make a clutch first down reception. Just like a veteran pass rusher will set up an offensive lineman for an entire game to bite on one move at an opportune time, veteran receivers often try to set up defensive backs into putting themselves in compromising positions at the end of games. Hopkins might not be a veteran, but he sets up Browner like a seasoned pro.

Hopkins is given a few yards of cushion by Browner and takes advantage by selling a go route on an outside stem. Take notice to how Hopkins widens away from Browner and bends low to really sell himself trying to win with his speed. It’s the little things that matter when running a route in the NFL, and Hopkins is somehow already a master of those minute details. 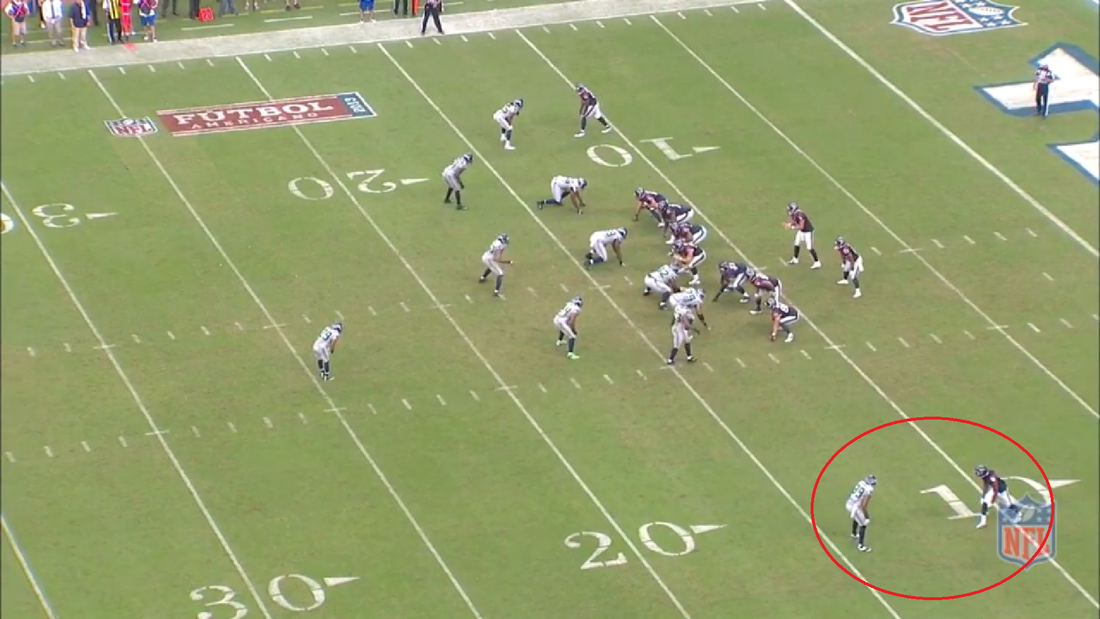 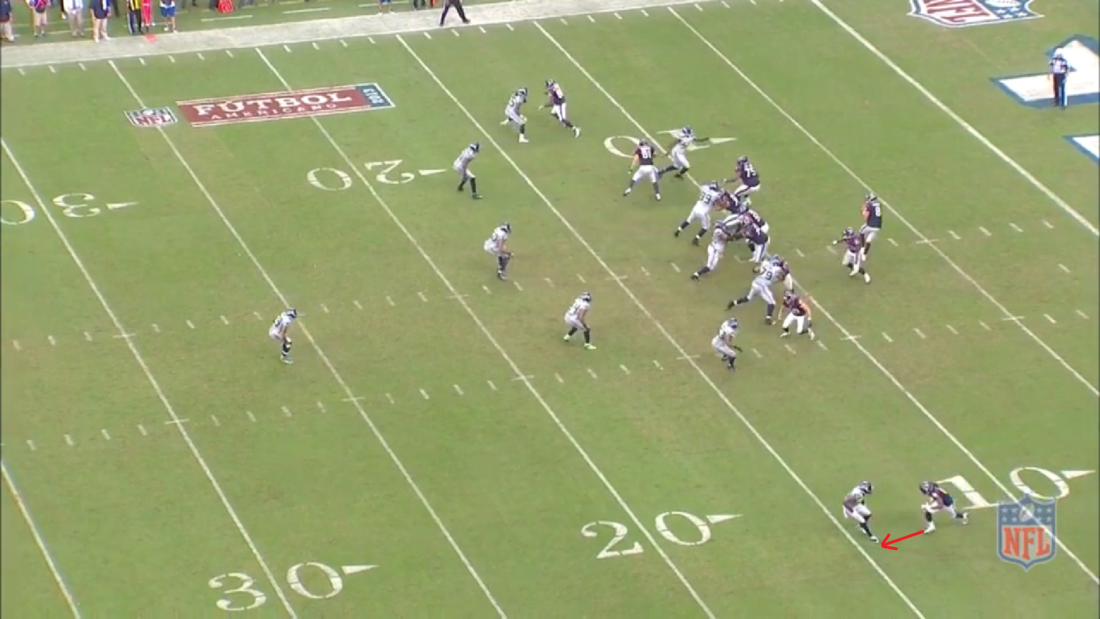 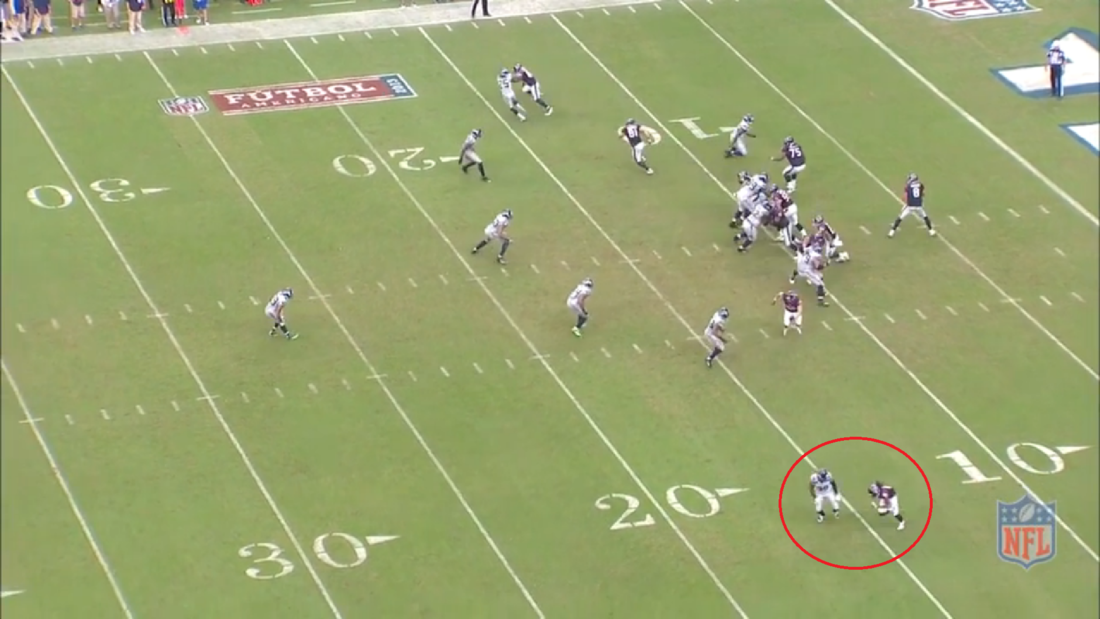 Selling a go route is only phase one in Hopkins’ master plan - now the fun begins. Hopkins starts to motor down and lean into Browner right when he flips his hips to run with the apparent deep route. This is the exact same move that Hopkins used at the end of the fourth quarter to spring himself back inside for a big gain, and Hopkins knows that Browner will be extra cautious against such a move being used again. 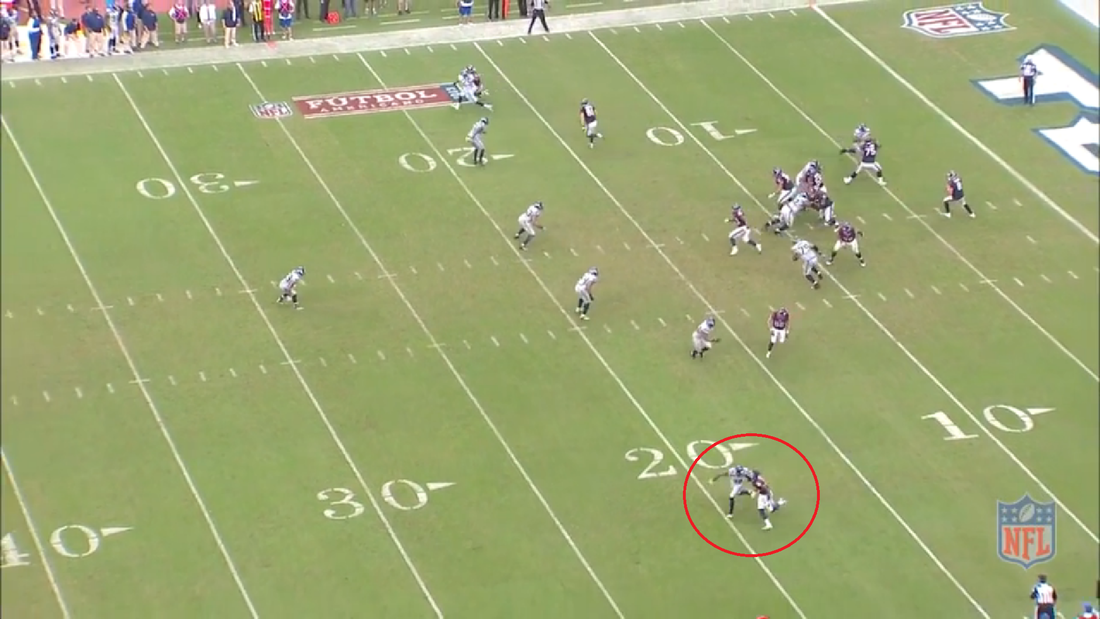 Once the rookie flashes inside, Browner immediately bites. Hopkins then throws down yet another move and breaks back outside to convert the first down. 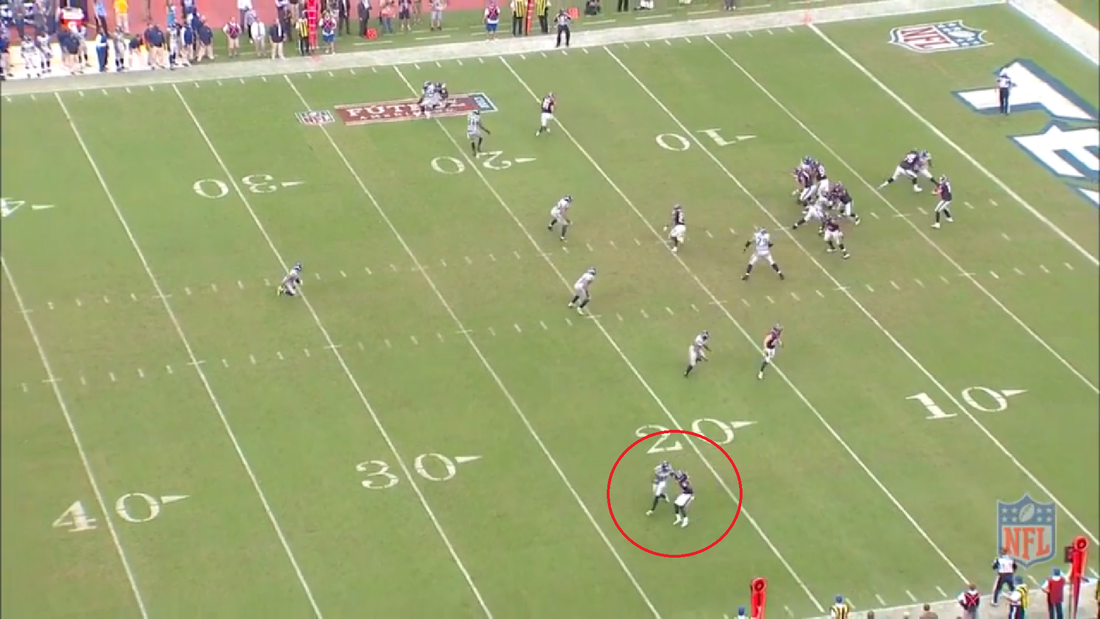 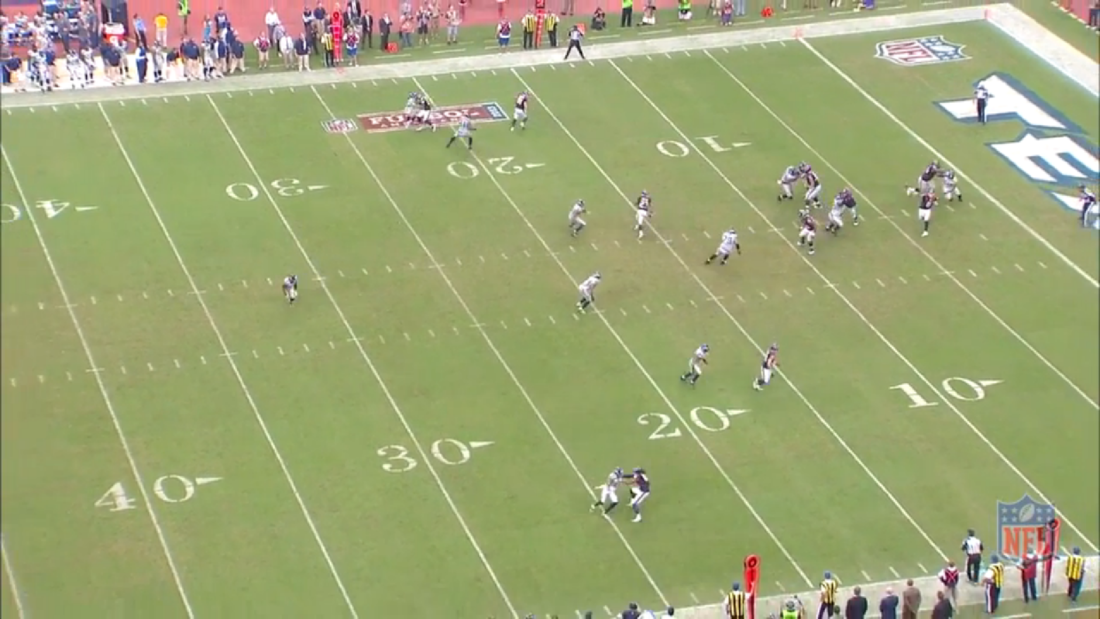 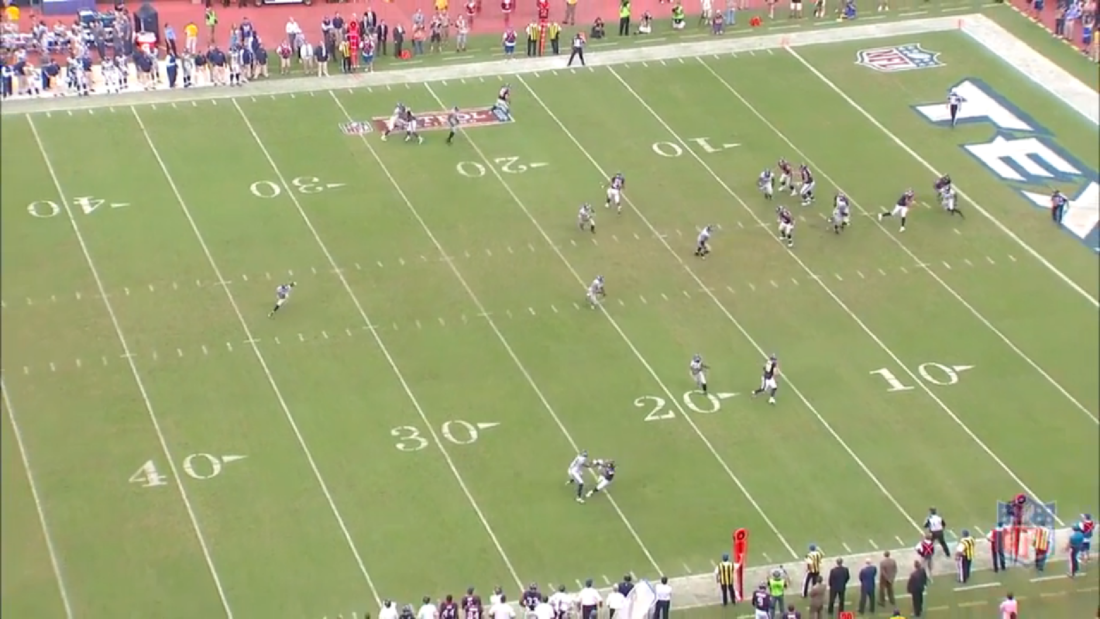 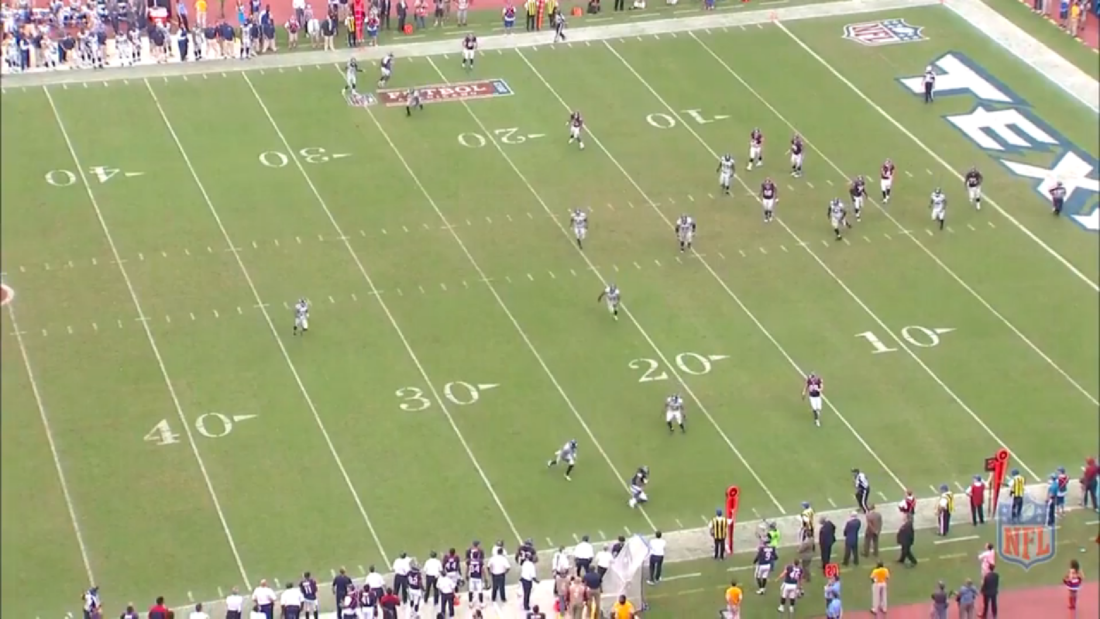 Hopkins could have just run a simple out route towards the sticks and hoped Browner missed him, but he didn’t. Instead, Hopkins decided to do his best Andre Johnson impersonation and undress a veteran corner with a triple route combination in overtime of a deadlocked game. Rookies do not do this. They just don’t. Make no mistake about it, this is a rare football player. Dreadful pass protection, injured running backs, playing second fiddle to Johnson, and poor quarterback play may have kept 'Nuk Hopkins’ numbers to human standards in his inaugural season, but the tape hints that Texans fans could be in for something special.

The rest of the NFL is officially on notice – DeAndre Hopkins is nasty, and he's just getting started.