2014 Houston Texans Schedule: Strength Of Schedule And Length Of Travel

In place of the usual date of the draft, the NFL released the schedule for all 32 teams. Let's take a quick glance.

Share All sharing options for: 2014 Houston Texans Schedule: Strength Of Schedule And Length Of Travel

I remember being much more excited about the release of the schedule last year. I suppose the ensuing 2-14 record will put a damper on your hopes for the future. Still,we will do our due diligence.

Firstly, NFL.com has an interesting gallery (not a slideshow) ranking each team's strength of schedule based on last year's record of their slated opponents . Scroll down a bit and you'll see the Texans at 30th with a .441. You'll also notice some familiar faces around them with Jacksonville at 29, Tennessee at 31 and Indianapolis at 32.

Yup, by virtue of the AFC South being that bad last year, we've all sunk down to the bottom. At the top of the list you'll see the entirety of the NFC and AFC West, the two toughest divisions last year.

But what does strength of schedule really mean? Not much according to SBN's Mark Sandritter who discussed the topic here.

"The drastic, and often unforeseen, changes from one season to the next makes offseason strength of schedule much ado about nothing. Sure, some teams who we think will be good will actually be good and some we think will be bad will in fact be bad. But, how many fans looked at the 2013 NFL schedule on release day and thought "oh my team plays the Texans, that will be a tough game." At the same time, many probably put a big W next to the Chiefs, when forecasting their teams' projected win/loss record."

He's exactly right and the chart in his article proves it. There's simply too much turnover, too many variables, and too many injuries throughout the season to use SOS as a reliable means of prognostication.

Thankfully Dougherty is around to take care of the math for us. I haven't seen the numbers for the other teams, but it lines up close enough to last year's total of 16,716, which was good for 8th most. 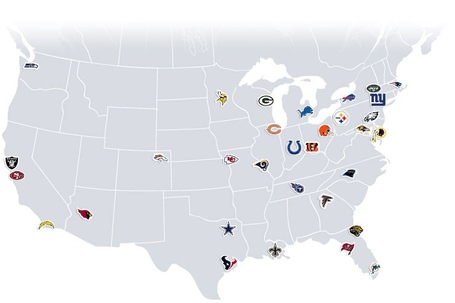 Like I mentioned last year, this number probably doesn't change much from season to season and you can see why in the map above.

Aaaand that's about it. We'll have plenty of time to delve into the schedule after the draft, and you better believe I'll be renewing the highly volatile, way-too-soon Season Previews from last summer.