Houston Texans History: J.J. Watt Was The Texans' 2011 First Round Pick And We Were Very Angry About It

There's no outrage like Internet outrage. Check out how Battle Red Blog readers and writers reacted to the Houston Texans taking J.J. Watt in the first round of the 2011 NFL Draft.

Share All sharing options for: Houston Texans History: J.J. Watt Was The Texans' 2011 First Round Pick And We Were Very Angry About It

Two things before we begin: 1) I don't bring these up to ridicule, put-down or ostracize anyone; 99% of us were confused by the Texans selecting J.J. Watt in the 2011 NFL Draft, and we predictably expressed our impotent rage in the echo chamber that is the Internet. 2) I was a shameful lurker in these days, and my reactions were just as egregious but not recorded anywhere... maybe Myspace. With these disclaimers out of the way, here we go.

These comments-- from writers and readers alike-- were ripped from the very first "J.J. Watt is a Texan" thread and the subsequent profile written about him.

"There is no emoticon for what I'm feeling!"

Seriously, Mario has to be standing up now.

We passed on Quinn, Fairley, Jordan and Amukarmara. DAMMITT!

Outraged but prophetic: Mario Williams did indeed make the transition to stand-up pass rusher... that is, unless he meant that Mario Williams stood up from his recliner in outrage after seeing the Texans select a fellow defensive end. We'll never know.

The National Football Post revealed this interesting mock negotiation for a player set to receive a big pay day one day.

J.J Watt exhibits such a perfect blend of strength and technique, and most of all: precision. We don't have to go very far back to find an example of this.

I mean. I wish I could give them the benefit of the doubt, but they haven’t earned that. Another guy who doesn’t make sense with what else was on the board. The Texans fall in love with players and then they just pick them without adapting or adjusting. I hate this team sometimes.

The prevailing theme in many of these comments is that Cameron Jordan, Prince Amukamara and Robert Quinn would have been better.  With how confusing and inexact the pre-draft season is, no one should blame them.

Did I mention this was a stupid pick?

Ahh, err... yeah. Like I said, not too many people correctly predicted Mario Williams would slide to outside linebacker. We immediately assumed that Watt would rotate behind Mario and Antonio Smith thanks to pre-draft reports that Wade Phillips planned on keeping Super Mario at DE in Houston's new scheme.

It's unclear whether or not .Bonzo took the advice generously offered to him by our ever-helpful readers, but I hope he found happiness.

I don’t think JJ Watt was a good pick at all. I would have rather had Fairley, Quinn, Prince, Jordan, Bowers, etc.

The Texans make it hard for me to cheer for them. Seriously love my team and my city but I am tired of our owner, FO, and sucking.

In the second sentence, you could replace the word "Texans" with any of the Houston sports franchises. Hope you're still around somewhere, wasteph.

In a word: "GUTLESS"! This FO is gutless 10 years in a row by not trading up EVER in the first round to nail a rockstar, or to ignite a fan base that NEEDS to see something change in the philosophy of the organization.

The better news, is that this is a classic Wade type target and a hard working kid. Let’s hope it pans out. It just lacks the excitement we were hoping for in the first round, but then again this organization hasn’t been known to do anything exciting so business as usual for us flattened underwhelmed fans of the expansion team still looking for a soul.

The remaining hope left is:

Rahim Moore in 2nd round

and now let’s go get some shit done in FA. GO GET SCRABBLE!!!

For those that don't know, MeMongo and current BRB writer Capt. Ron are one and the same. I feel terrible that I wasn't a poster back then; my reaction was similar to Ron's, and I feel like I should be digitally flogged right alongside him as penance for ever doubting Watt. By "SCRABBLE!!!", Ron is referring to then-free agent cornerback Nnamdi Asomugha, who the Texans smartly avoided in favor of signing Johnathan Joseph. Credit to Ron, though, for being bearish on Aldon Smith, though he's gone through almost every type of off-field issue since his stellar rookie year.

Click on the picture because it's worth reading. Another BRB writer lets his feelings be known, and I just wanted to give props to BattleRedFan for jumping in with her usual cheerful optimism. I'd draft her in the first round if you know what I mean.

This isn’t a safe pick. It’s a chicken-[kitten] pick. The only, and I mean LITERALLY the only way this is a good pick is if we kick Mario out to OLB. Watt is a redundant pick for a team that not only has no depth, but we need players at every position BUT DE. To leave guys like Quinn, Prince, and especially Fairley on the board (who would excel as a 1-gap DT) is ridiculous.

Again, my criticism/cynicism is dependent on Mario staying at DE. If he moves out, I can see this working. If not, say hello to Travis Johnson Part Duh.

Needless to say, I have nothing but hate for this pick. I’m [kitten]ing furious, in fact.

Emphasis added because LITERALLY is my favorite word. Thankfully for all of us, the Texans agreed with bfd; Williams slid over to OLB, and Watt would go on to become the Human Hyperbole that he is today. 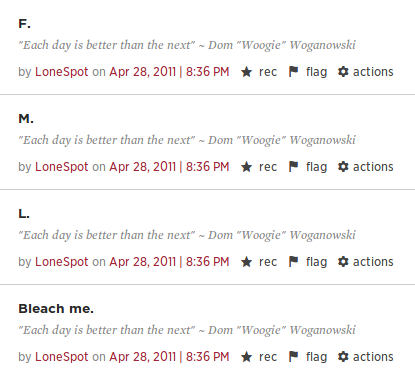 You have to be stupid, drunk or high, to pass up quinn and get watt. MORONS!!!! WE SUCK AGAIN!

Yeah, this one's definitely my favorite. Come up to the stage and take a bow, Ray86.

How 'bout the Lotto numbers next?

It wasn't all doom and gloom. Some of you were on the Watt bandwagon before anyone else, and you rightfully deserve the spotlight for that. 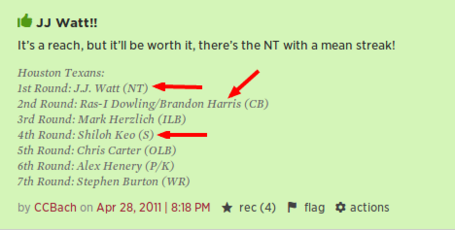 Look at CCBach with the triple dose of prophet-eering! Not only did he mock Watt correctly, he also nailed Brandon Harris in the second and correctly predicted Shiloh Keo coming to Houston, albeit one round early. Too bad the Alex Henery draft pick didn't come to fruition... would have saved us a lot of heartache from Randy Bullock. CCBach's obvious case of #NTLust clouded his judgment on where Watt would play, though.

Pretty close prediction. Watt didn't replace Mario directly, but he filled the void as the primary pass rusher in 2012. The organization surely must have seen the truck loads of cash that were heading Mario's way.

It's time for a full Houston Texans mock draft, BRB-style.

Quinn’s brain tumor scared people off, Fairley’s attitude/work ethic scared some off plus he doesn’t fit the 3-4……

Watt’s a high motor guy and I can’t wait to see him in Houston. I know people will love this guy when he hits the field….trust me. The guy is the best 3-4 defensive end in the entire draft.

Nailed it. Needless to say, we need more TexansDC in our lives to protect us from ourselves.

I’ve been on the JJ Watt bandwagon for a few weeks now. He’s gonna be like Jared Allen but bigger, stronger, and longer.. We need to sew up Martez Wilson in the 2nd.. Things are starting to look up!!!

Well, I don't need to remind you how pleased I am.

But when you think about this pick, consider Mario’s status going forward. Either he proves to be a poor fit for the 3-4, and you let him walk. Or he turns into a great player, and you have to give some serious thought to whether or not you want to a pay a good 3-4 DE top-three 4-3 DE money.

And for the record, drafting a guy to work in a rotation at a physically demanding position isn’t the worst thing in the world. It’ll keep the other two fresh, and hopefully keep Mario healthy. I think he’ll see 500+ snaps this season, which is more than enough for a rookie.

Just because J.J. Watt is white doesn’t mean he’s just a "high-motor" player. The guy is an incredible athlete; look at his combine results; 4.22 short shuttle, 6.88 3-cone, 37-inch high jump… All of that at 290 lbs. The guy is a talented, athletic, and a hard worker. Regardless of whether or not he fills our biggest need, going 3/3 on the above attributes ain’t bad.

Kudos to these obviously smart and probably good-looking readers for their impressive foresight.

I could go on and on, but these are the choicest bits I found. I noticed in both threads that it took about an hour for the tone of the comments to change from "WTF?" to "WOW!", presumably after watching a few J.J. Watt highlight videos from Wisconsin. Other than 2013's choice of DeAndre Hopkins, there's been always a large portion of fans who are extremely upset with the Texans' first round pick. It's in our nature. Even when our indignation ends up being justified, it's often for the wrong reasons or retconned with hindsight.

The moral of the story is: screw the [kitten]ing Draft for making us go through these emotional roller coasters and double [kitten] the NFL for pushing it back two weeks this year. Also, like Tim says in this equally hilarious 2007-2010 NFL Draft reaction review:

None of us really have a clue what we're talking about. The draft will take its course, and the pick will ultimately be judged by its onfield prowess, not the reaction it garners from the fans. While BRB is the perfect place for you to sound off with your thoughts (and that's what we're here for), remember that we're all Texans fans, and we'll support whoever the team takes once the [___] season starts.

Feel free to giggle, cry, or just reminisce over this tumultuous, yet ultimately rewarding chapter in Houston Texans history. If you're reading this, Mr. Watt, we love you and don't ever leave us.