After a dismal 2-14 season in 2013, your Houston Texans have been going through quite a transformation. All but two coaches were fired, and several players have been allowed to depart in free agency. See where everyone ended up.

I'm bringing back the "Breaking Battle Red Bad" theme for this offseason update, because our world is being flipped upside down before our very eyes. The Texans are definitely transforming quickly in preparation for the 2014 season.

I'm not sure what defines "a lot" to our fearless owner, but radical changes are definitely underway. They say a picture is worth a thousand words, so let's take a look at where former Texans coaches and players have landed. 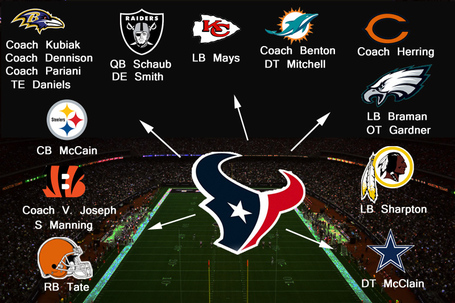 The first thing that jumps out as you look at this image is that each team in the AFC North will have former Texans from 2013, including a significant representation in Baltimore. Our former head coach, offensive coordinator, tight ends coach, and the ever popular tight end Owen Daniels will all be packing purple next season. While I understand the need for change after such a collapse in performance, I think all of these guys will be sorely missed. The Ravens are rebuilding very quickly following their championship season just two years ago.

Former defensive backs coach Vance Joseph, once thought to be the rising star and possible successor at defensive coordinator, will be reunited with safety Danieal Manning in Cincinnati. I think both of these guys will be greatly missed by the Texans. The Bengals won their division last season and are a real contender in the AFC with three consecutive playoff appearances.

Conerback Brice McCain landed with the Pittsburgh Steelers after being cut by the Texans, and I'm sure he'll have a career season without back-breaking penalties for their defense. Meanwhile, running back Ben Tate joins the "Dawg Pound" in Cleveland about two years later than previously anticipated.

The greatest starting quarterback in Texans' history will be wearing silver and black in 2014. Of all the rebuilding changes an NFL team could face, the quarterback is the scariest. It's almost less frightening to change head coaches than quarterbacks. This position is so pivotal to success that some teams face multiple decades of "quarterback hell" before finding someone who can lead them forward to championship competition. 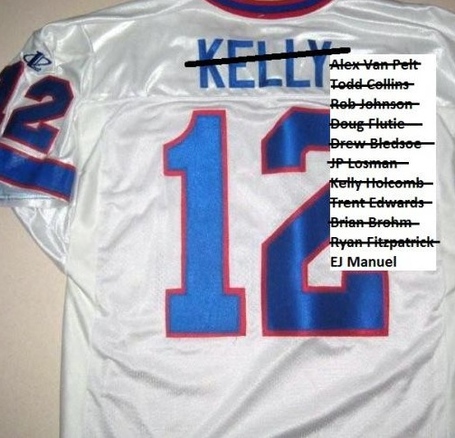 Meanwhile, other teams seem to find rare "Luck" in going from one superstar to the next without missing a beat: 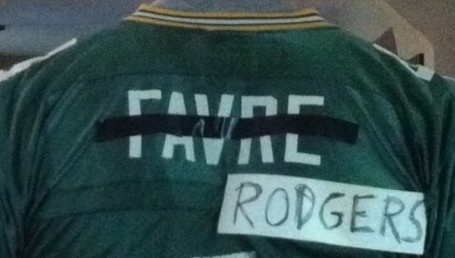 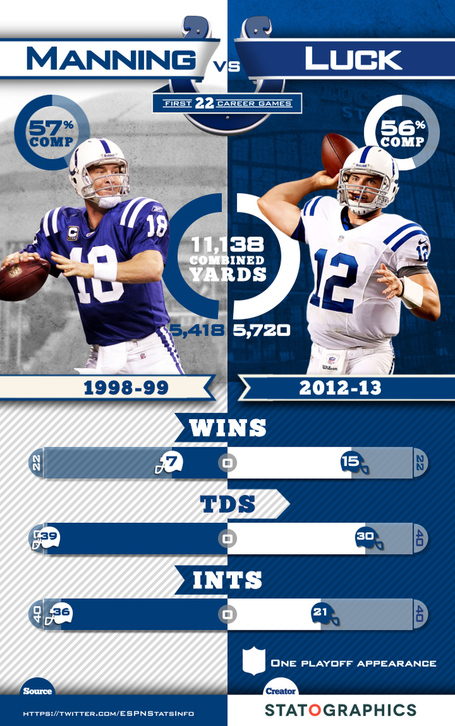 We could only be so fortunate as the two latter examples, eh? Let's hope we are not facing the first two examples. There's not enough bleach to withstand that many quarterback changes in Houston.

It was clear that Matt Schaub needed to go after leading the team's collapse last season, but the void he leaves behind is quite terrifying. Filling that void with a new quarterback in this next era will likely be the primary narrative for several years, for better or worse.

Joining Schaub in Oakland is one of the most memorable defensive leaders the team has ever known in defensive end Antonio Smith. "The Ninja Assassin" will be missed greatly for his wide smile, strong leadership, fearless and relentless effort on the field, and for smacking down schoolyard bullies like Richie Incognito. The defensive line of the Texans needs immediate attention if the team is going to compete in 2014.

Linebacker Joe Mays will be heading to Kansas City, where he will likely reign terror on his former Broncos team. When Mays played against the Texans in Denver in 2012, he was fined for a violent hit on Matt Schaub. The impact tore a piece of Matt's earlobe off during the collision. Last season when Mays signed with the Texans during camp, I couldn't resist providing this mock exchange between Schaub and center Chris Myers: 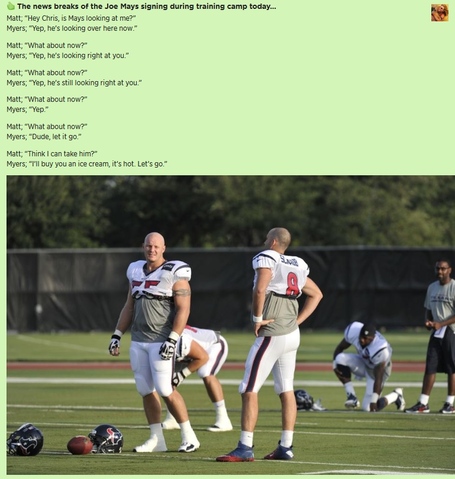 The Dolphins hired John Benton, the former Texans' offensive line coach. They also signed Houston native and local hero Earl Mitchell. Let the "can he play NT?" inquiries continue until this void is finally filled for the Texans. May the search for "Monte Cristo" [1] finally end this year for Houston.

That wraps up the mass-exodus of former Texans to other AFC teams.

The former linebackers coach for the Texans, Reggie Herring, will be coaching up "Monsters of the Midway" in Chicago for 2014, as he was hired by the Bears. Let's hope that the Texans' new linebackers coach Mike Vrabel can do more with Whitney Mercilus and Brooks Reed this year than Herring was able to previously. We'll also expect to see Trevardo Williams make an impact now that he is out of the former regime's "red shirt rookie I/R stash" program.

With the 2014 NFL draft approaching in a few weeks, will we see Jadeveon Clowney, Khalil Mack, Anthony Barr, C.J. Mosely, Chris Borland, or Ryan Shazier on the Texans' roster to learn under Vrabel? I sure hope one of these guys comes here, because the pass rush and mid-field pass coverage of the defense needs a serious injection of talent.

The New York Giants are the only team in the NFC East who won't pick up a former Houston Texan this offseason. The Eagles will add two more former Texans to their growing list of "Texadelphians" by adding linebacker Bryan Braman and offensive tackle Andrew Gardner.

Linebacker Darryl Sharpton has signed with the Redskins, and so far there has been no mention of injury during his journey to the D.C. area. Defensive tackle Terrell McClain will be just four hours up Interstate 45 in Dallas, and rounds out the list of recently departed Texans so far in 2014.

"We don't have to do a lot to get us back on track,'' McNair said. "This is not a long-term rebuilding process. We've still got a good core group of players that can make for an outstanding team. Our goal is to win the Super Bowl, not just be there."

When he says; "This is not a long-term rebuilding process," I have to agree from what we have seen. He has pretty much torn down massive pieces in a very short time. The question is if you can fill that many pieces in just ONE offseason. It has happened before for several teams. The key to success usually gravitates around the ability and performance of the quarterback and the head coach.

When he says; "We've still got a good core group of players that can make for an outstanding team," I tend to agree. The core nexus is in place, but there are still gaping voids to fill in short order.

When he says; "Our goal is to win the Super Bowl, not just be there," I appreciate the vision. The other 31 teams feel the same way of course. I really think the Texans peaked in 2011, notwithstanding a certain Albert Haynesworth and his hatred for Matt Schaub. If there is one key element that I want to see in this new era, it is simply "the will to finish off the opponent" in every game. To fully embrace the headline image caption, and to quote from one of the greatest critically-acclaimed television series ever;

"No more half measures!"

Mike, please share with everyone what we mean by "half measures" if you will...

[1] "Monte Cristo" is in reference to something MDC mentioned a few years ago, and it sort of stuck as a meme in Houston's search efforts for a true space eating NT: