The second part of the National Football Post's mock negotiation with J.J. Watt's agent has been released. It's very well done and could open up a whole new arena in Mock technology. Check out some highlights.

If you missed the first part of this, you can check it out here. If you're unfamiliar with the basis of this mock, here it is:

Former NFL agent Joel Corry and former New York Jets Director of Football Administration Ari Nissim are going to give the NFP readers an in-depth perspective of how an actual contract negotiation between an Agent (Joel) and the Club (Ari) takes place in the NFL. Although condensed, Joel and Ari are attempting to take readers through a player contract negotiation from beginning to possible conclusion in weekly segments. Whether they can reach an agreement on the hypothetical contract extension is not known by anyone at this point. The player Joel and Ari will be negotiating over is Houston Texans pass rusher J.J. Watt, the 11th overall draft selection from the 2011 NFL Draft.

I bolded the most interesting part. If it's true that they really haven't reached an agreement beforehand, it makes it all the more interesting to read... almost like a sports-based, page-turning thriller. The savvy agent clashes with the shrewd football executive in a no-holds barred negotiation in which only one man can emerge victorious.

Maybe it's not quite that dramatic, but it's still well worth your time. Here's a snippet of Joel's counter-offer to Ari.

Any salary comparisons for J.J. should be with the top of the non-quarterback market. For example, the average of the three highest paid non-quarterbacks (Calvin Johnson, Larry Fitzgerald and Mario Williams) is $16,122,500 per year. $49,416,667 is the average in guarantees with their deals.

I believe the Texans are equipped to handle a contract that adequately reflects J.J.’s true value. With the trade of Matt Schaub, $17 million and $19 million salary cap numbers have been wiped off the books in 2015 and 2016, which may have made a deal for J.J. more challenging. Barring something unforeseen, your organization should have a young quarterback on his first contract (with modest cap numbers) at the helm over the next few years.

We believe the following contract below is more appropriate for a player of J.J.’s caliber. 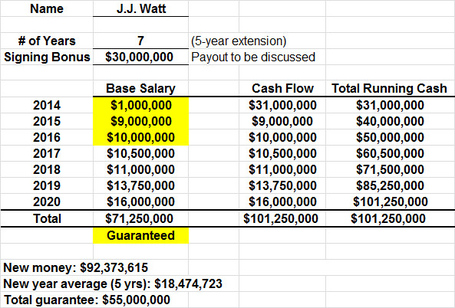 Holy smokes, that's a lot of zeros. Joel crumples up Ari's $12 million per-year offer and writes down his own figure on a piece of paper before sliding it back across the table-- a figure about 50% higher than the original.

So how does Ari respond? Click here to find out, and kudos to the National Football Post for setting this up.