During the press conference with GM Rick Smith and Head Coach Bill O'Brien after Day 2 of the 2014 NFL Draft, there was a discussion about right tackle, which included some comments from O'Brien that were a bit unsettling with respect to Brennan Williams and the right tackle position.

It may be too early to have concerns about players missing voluntary mini-camps.  During a time when the team is going through massive changes and entering a new era, it does bring absences to the forefront when players are conspicuously missing from action.

Andre Johnson missed last week's three-day mini-camp, and it was rumored that his absence was possibly due to attending Dunta Robinsons's wedding.  I'm not overly concerned that an All-Pro veteran talent like our beloved #80 misses a voluntary training session.

What does concern me is the status of one Brennan Williams, who underwent microfracture surgery last year.  We haven't heard anything "official" about his recovery status or expected date of return to the team.  When questioned about it, the Texans' new head coach was quick to dismiss the line of discussion.  O'Brien may have been trying to stay within the guidelines prescribed by the league and/or Texans organization when talking to the media about injured players, so we can cut him some slack as he adjusts to this aspect of dealing with the media.  On the other hand, his body language and comments didn't instill a sense of optimism that we would see Williams in a Texans uniform anytime soon, if ever.

McClain: "Is Brennan Williams able to come back yet?"

McClain: "When he’s healthy will he be in the mix at right tackle?"

OB1: "Yeah I mean, you know, we’ll see how it goes. You know, sometimes you have to…you know…ask me that question a little bit down the road."

You can see and hear this exchange about 12 minutes into this video posted on the Mothership.

Williams was drafted out of North Carolina by the Texans in the third round, 89th overall, in the 2013 NFL Draft.  He suffered a knee injury on May 11th, 2013 (just one year ago yesterday) during rookie training camp.  He was added to the PUP list for training camp.  He was then placed on the injured reserve list when the 53 man roster was set for the 2013 season.  You can read THIS ARTICLE on his him, which leaves me greatly hoping he returns healthy and ready to play for the Texans this season.

In February of this year, Williams returned to his high school (Catholic Memorial) in Boston to be the first football player in his school's history to have his jersey number retired.  He shared these comments with ESPNBoston.com:

Biggest learning curve in the NFL so far: "Just all the technique stuff. Unfortunately I wasn't able to play in any games this year due to injury, but just in practice and going against guys like J.J. Watt...All-Pro talent like that, you know, everything you've got to do it right."

What it's like facing J.J. Watt in practice: "It's a different experience (laughs). He's that good for a reason, because he practices that good. It was a good test to see where I was at, and I'm excited to get it going again this year."

How his recovery is going: "It's a slow process, the procedure that I had. We're getting to the point where it's about almost a year out now, so slowly but surely we're getting there."

Timeframe on his return? "I'll be back on the field for spring. I'm really looking forward to it because I haven't been healthy in, I dunno, two years now. So just to be able to be at my full capacity, be able to go out there and be myself is really exciting."

That DOES bring more relief and confidence to this situation.  He lost a year's worth of experience due to this injury, but let's hope he's back 100% and can take the reins at right tackle.

The Texans more than satisfied the glaring need at left guard with the addition of Xavier Su'a-Filo, who many analysts feel was the best offensive guard in the entire draft class.

The need to improve at right tackle was not addressed by Houston in the 2014 NFL Draft, but they did sign three undrafted free agent offensive tackles shortly afterward:

I submit to you that your fears of Derek Newton returning to the lineup are warranted.  With some uncertainty regarding Brennan Williams, we MUST collectively hope that David Quessenberry can step in and be that right offensive tackle for the Texans this year if Williams is unable to play.  Hopefully BOTH of them are ready to go this year.  You may recall that Quessenberry had his own challenges during his first year in Houston.  He suffered a broken foot during training camp, and someone stole his truck. 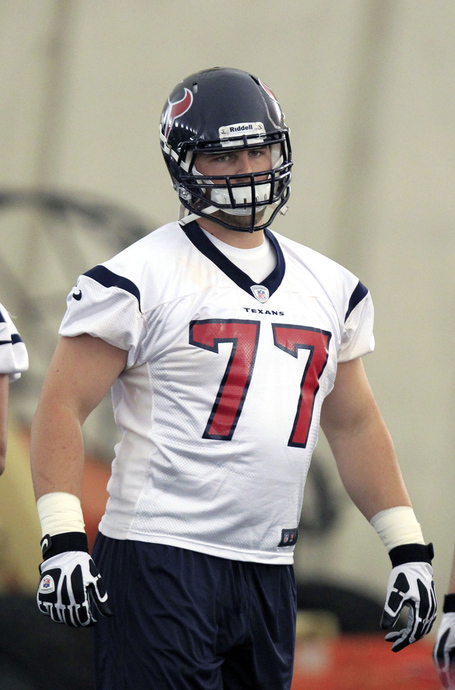 Quessenberry was drafted out of San Jose State by the Houston Texans in the sixth round, 176th overall, of the 2013 NFL Draft.  You can read THIS REVIEW of him, which provided hope that he would develop positively for the Texans.  All-Pro left tackle Duane Brown had high praise for Quessenberry during training camp last year.

For the amount of enthusiasm I have with bringing in Su'a-Filo as the new left guard, I have double the anxiety about the situation at right tackle.  Please share your thoughts below.