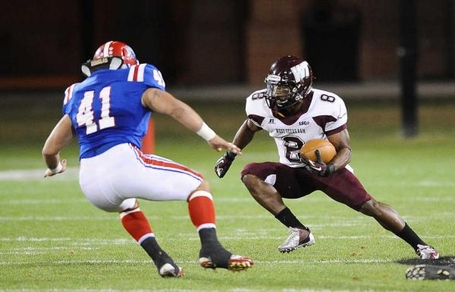 The Slot Receiver competition will be one of the more intriguing at camp this summer if we stack Keshawn Martin and Alan Bonner against 2014 UDFA acquisitions Travis Labhart (Texas A&M University) and Nathan Slaughter (West Texas A&M). Martin looks to have the toughest road to the top, and frankly I wonder if Bonner is miscast simply by being more of an H-Back than a slot receiver type of player. That brings us to Labhart and Slaughter, and I will defer to resident A&M fanatics when it comes to Labhart analysis.

While Bill O'Brien recently stated that he thinks the Texans might already have their slot receiver on the current roster, namely Mike Thomas who was signed this offseason, there are now two UDFA Slot WRs added to the roster who should each provide adequate competition--Travis Labhart of Texas A&M University and Nathan Slaughter of TAMU member school West Texas A&M University.

Excuse me for a second if I ponder that Labhart and Slaughter are the Wes Welker type of Slot WR that I personally think O'Brien has his eyes on, not Mike Thomas whom I see as your typical Seabiscuit who makes the other horses run faster at the training track. The Texans signed a number of players in the offseason, and from where I stand I think Potter is the low man on the TE totem pole, as are other acquisitions that look like depth who will have to compete with fresher blood acquisitions such as Labhart and Slaughter. My WTAMU bias is shading that statement, by the way! Heh.

I'll focus on Nathan Slaughter seeing as how I have attended most of his WTAMU home games over the past four years and watched the road games via local TV coverage. WTAMU QB Dustin Vaughan is a huge tall QB whom the Cowboys signed as a UDFA, so you can see what happens with a taller QB slinging passes Slaughter's direction. Slaughter also blocked a punt that was returned for a TD, by the way, as seen at the 6:18 mark of his highlight video. He basically is American Express because he's everywhere you want to be.

High School And Path To College

He played high school football at Lubbock High School in Lubbock, TX, graduating high school supposedly with a 4.0 GPA. Slaughter had numerous offers to play for various colleges, but ultimately chose West Texas A&M University because of their high octane offense that was directly engineered by former head coach Don Carthel who took over a 1-win program in 2005 and then proceeded to win the conference the first year of his overhaul there. It was the first conference title in over 19 years for WTAMU.

The WTAMU offense was built in 2005 with help from Mike Leach who allowed the WTAMU staff to basically live in Lubbock and attend all meetings and practices. Since the air raid's inception at WTAMU in 2005, the Buffaloes are an annual favorite to win their conference (recruiting is dominantly better than its opponents' recruiting efforts) and they came within one game of playing for the national championship this past year.

Welker was to Leach what Slaughter was to Carthel, the elusive and gritty Slot Receiver who takes slants and screens in a way that causes havoc on opposing defenses who can't find them in traffic and who inevitably end up with hands on hips after prolonged exposure to that type of hyperkinetic action on the field all game long. You love them when they are on your team, and you dread them when it's your LBs trying to track them down all day long. We have never had a true utilization of a true Slot Receiver, though Kubiak tried with David Anderson to some degree off and on over the years before finally giving up on the idea. Looking at the Polish Hat selection, and now the UDFA Slot Receiver additions, I think O'Brien is about to Patriot-ize our offense, folks. If so, kitten will get real, real fast.

The Patriots have always deployed the shifty go-getter Slot Receiver like you see in the Mike Leach offense. Whether it's Welker, Amendola or Edelman, you can count on those little boogers as a feature of a Patriots offense. I think Bill O'Brien will deploy his Slot Receiver the same way in Houston. 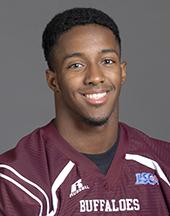 Coach Carthel had strong upperclassmen that the WTAMU QBs leaned upon, reducing Slaughter's role in the freshman and sophomore campaign at WT. But it was his junior season in 2012 where Nathan assumed a more commanding role with the Buffaloes, racking up 67 receptions for 827 yards and 6 TDs. In his 2013 senior year, the numbers dipped to 50 receptions for 516 yards and 3 TDs. Extrapolate the numbers from a college 11-game season into an NFL 16-game season, and if he annually averaged about...say...55 receptions, 600 yards, and 4 TDs in 11 games, then in 16 games does that average to something like 80 receptions, 960 yards, and 5.5 TDs if he's utilized to the Patriot standard and if Slaughter turns out to be Welker'ish in his own talent level. A guy can dream, right?

Nathan Slaughter is 5' 9" tall and has jets that rocketed him to a 4.34 40-yard time at his pro day in March 2014. The following numbers were taken from Slaughter's profile at NFLDraftScout.com:

Let's take a look at Slaughter's video footage from his March 2014 pro day.

Here's what appears to be Nathan's YouTube channel where you can see more pro day footage.

And here's the link to Nathan Slaughter stats from his college career at WTAMU which displays links to 2010, 2011 and 2012 but you can do some clickin' around within those pages if you're savvy enough to find his 2013 stats too. ;)

Finally, below is a 9-minute highlight reel of Nathan Slaughter slashing and gutting defenses and special teams coverage units. Enjoy the carnage! Pay attention to the following plays at the following marks:

1:35…amazing one-hand grab while jumping and contorting his body to locate the ball (ESPN #7 Top 10 Play!)

2:58…this is an Andre Johnson pinball beast mode TD by Slaughter.

4:29…flea flicker catch and CRAZY vision to cut back across the width of the field to outrun and score

6:18…just a trick that I think Bryan Braman taught him on how to block punts

6:37…OMG,he runs over a ST gunner on this kickoff return. Not smart, but it looks amazing!

Sound Off & Cast Your Vote In The Poll Below

So, what do you think from watching the clips and viewing the stats and measurables?

I have enjoyed watching Nathan slaughter opposing defenses by finding the open space in zone coverages. His ability to make cuts at the right time, to accelerate at the right times, and his vision for running lanes and opportunities he takes to cross up his pursuers makes me excited to see what he can do in camp and in preseason. He's a long shot to make the 53, but I do feel that he has a decent chance if nothing else.

What chance does Nathan Slaughter have of making the Texans' 53 man roster?