J.J. Watt Named The Best Player Of 2013 By Pro Football Focus; Andre Johnson In At 51st

Pro Football Focus has released its Top 101 Players of 2013, and they graciously did so in less than a week instead of dragging it out for months. To the surprise of no one, only these two specific Texans made the list.

Share All sharing options for: J.J. Watt Named The Best Player Of 2013 By Pro Football Focus; Andre Johnson In At 51st

The Draft is over and minicamps are revving up. In the meantime, we'll be getting lists thrown at us from all directions like cheap confetti. Still, they make for some interesting conversation fodder. Before we begin, it's worth looking at PFF's criteria for this list:

- This list is based solely on 2013 play. Nothing that happened in previous years or may happen in the future is accounted for. This isn’t about class or talent, it’s about form throughout 2013.

- This list is created with an All Positions Created Equal mantra. So you won’t see 32 quarterbacks heading the list even though that is the most valuable position, instead seeing how guys played relative to what is expected from their position. You might disagree with this for doing a Top 101 list which is your right, but this is how we’ve done it for the past three years and will continue doing it so that every player has a fair shot at getting the respect they deserve.

- A repetition because it’s often the most misunderstood; this is not a list about talent or a lifetime achievement award. It is solely, 100% based on what happened between the opening kickoff of the 2013 regular season and the final snap of the Super Bowl this past February. Anything outside those dates does not matter.

"While Johnson isn’t getting any younger he’s still an incredible talent, devoid of the attention he deserves because of the struggles of his quarterback and low touchdown total. Nonetheless he still finished seventh in the league in terms of yardage in spite of some erratic passers, while having the sixth highest receiver grade on the year. Don’t write him off yet just because he’s locked in a battle with Father Time."

Key Stat: Picked up 3.35 yards per route run when running ‘In’ routes. The most of any receiver.

Andre Johnson continues to impress pundits and analysts with his play on the field. His ranking from last year slipped this year but he continues his high level of play. He caught 109 passes for 1407 yards and five touchdowns, but it was yeoman's work for a team that had no true quarterback and won just two games. Even though it earned him a Pro Bowl berth-- that he opted out of due to injury-- it's nice to see him get praised from a pure analytic standpoint. 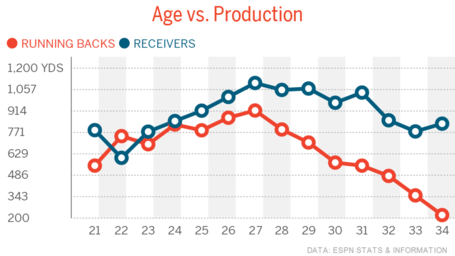 From ESPN's article "Running back cliff after age 27" we see that wide receivers in general tend to produce good yardage, even in their early thirties. Like any phenom should, we also see that Andre has stayed well above those averages. Five of the past six years, Andre has topped 1200 yards and four of the past six years he's caught more than 100 passes.

How about three more years, Dre?

"In 2012 J.J. Watt was a sensation. For much of the season he was chasing the all-time single-season sack record as well as posting a ridiculous number of batted passes. He was the obvious and consensus Defensive Player of the Year after having one of the best seasons the game has ever seen.

"Believe it or not he was better this season."

"Watt has a unique mix of strength, quickness, speed and moves that often leave offensive linemen grasping at air. He is the perfect player for any attacking one-gap system and seems to be only getting better."

CLICK HERE TO READ THE FULL ARTICLE ON WATT.

If seeing Watt at No. 1 is a bit familiar, it's because he was PFF's top player last year, too. Despite not matching his sack total and passes defensed, Watt graded out higher than he did last year.

Even with the thesaurus-full of adjectives we've used to describe Watt, it's still stunning to see him sitting comfortably atop the list. I hope the day never comes when we start taking his abilities for granted because it's nice to be consistently surprised even after three years of watching him.

The writer of the Watt piece, Sam Monson, seems to think we're watching an all-time great developing right before our eyes. It's hard to really grasp the magnitude of that... almost like trying to imagine how big the universe really is. It hurts my brain, but it's awfully exciting.

Anyway check out PFF's full rankings, and leave your thoughts below. Are you surprised to see where Watt and Andre ended up on the list?