The next chapter in the J.J. Watt's mock negotiation saga is here. I've been waiting for this almost as eagerly as an episode of Game of Thones. We've seen the initial offer and counter-offer from the two parties, but can they meet somewhere in the middle?

If you're just catching up, the National Football Post is hosting a live negotiation, carried out in weekly installments between a former agent and a former NFL executive, concerning J.J. Watt's next contract.  Explanation below:

Former NFL agent Joel Corry and former New York Jets Director of Football Administration Ari Nissim are going to give the NFP readers an in-depth perspective of how an actual contract negotiation between an Agent (Joel) and the Club (Ari) takes place in the NFL. Although condensed, Joel and Ari are attempting to take readers through a player contract negotiation from beginning to possible conclusion in weekly segments. Whether they can reach an agreement on the hypothetical contract extension is not known by anyone at this point. The player Joel and Ari will be negotiating over is Houston Texans pass rusher J.J. Watt, the 11th overall draft selection from the 2011 NFL Draft.

Last week, Corry gave to Nissim his counter-offer of about $18 million per year over five years. This is a big increase from Nissim's initial offer of about $12 million per year. Corry cited players like Larry Fitzgerald, Mario Williams and Calvin Johnson as relevant "non-quarterback" contracts to consider for Watt's negotiations.

Nissim countered that none of those players were negotiating an extension with two years remaining on their current contract, and immediately poked holes in the numbers comparisons:

Calvin Johnson’s per year guarantee is $6.965 million (seven years/$48.75m), Larry Fitzgerald’s is $6.429 million and Mario Williams’ guarantee would be at a prorated amount of $8.33 million. If you average those three numbers, you get $7.242 million on a guarantee per year, then multiplying that amount by five new years, the guarantee amount is roughly $36.2 million. A guarantee amount of $36.2 million is substantially less than the $55 million your proposal asks for and is derived using your own methodology.

Nissim then tried to steer the focus back to front seven players like Clay Matthews, who signed a deal (cheaper in some ways) similar to his initial offer. And finally, Nissim left the negotiations with this subtle threat:

We do not believe you are giving due consideration to the fact(s) that J.J. is under contract for the next two years and if we franchise him in 2016, even assuming a franchise amount of $16 million, his total pay for the next three years is a little under $25 million, with the majority of that coming in the franchise year.

And this is where much of the leverage swings back towards the Texans. Watt is under contract for two more years.  With the franchise option available, he could easily be retained for 2016 as well. This should be a major advantage for teams for future first-rounders seeking a big pay day. We already saw the Texans exercise the 5th year option on Watt's contract, controlling him through 2015.

So this week, after exchanging some ideas on what's relevant and what's not in terms of discussing Watt's potential contract extension, Corry managed to get the Texans to increase their initial offer as shown below. 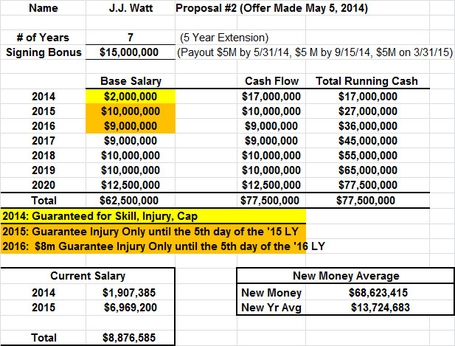 The offer presented below will give J.J. $35 million in guaranteed money and pay $27 million over the next two years; $18 million more in cash over what he is scheduled to make during the next two seasons.

Bazinga! That's a lot of money, too. Click here to compare this offer to Nissim's first.

You just knew that both sides had to start off on the extreme ends before meeting somewhere in the middle. We'll see how Corry responds next week. Like I mentioned last week, if the two sides are truly negotiating, there's some real nerd-fuel for us to burn through. They legitimately decide to end negotiations at one point.