The newest player to join the Houston Texans met with the media after being selected as the first overall pick of the 2014 NFL Draft.

Here's a link to the entire interview with Jadeveon Clowney on the team's official site; below are some of the quotes plucked for your immediate review.

Emotions from being picked first overall:

"I was just telling them, I’m feeling great right now. You know, it’s just a blessing. I appreciate and am glad to be a part of the Houston Texans."

"It’s been a great day. I’m enjoying every bit of it. No one can take this away from me, this moment. I’m just happy about it. It’s just a blessing for me and my family, so I’m happy, man."

"Man, I've been dreaming about this my whole life."

When he knew he was going to the Texans:

"I’d say like three minutes on the clock they called me and said, ‘Hey, welcome to Houston.’ I was like, ‘Man, I’m just happy to be a part of the Houston Texans.’"

How confident was he about being selected first overall:

"I mean, I really didn’t know. Even though media talks, sometimes the media can be wrong. I was just happy about the situation and me going number one."

Does he have something to prove to the critics and naysayers?

"I think I’ve got a lot to prove to people. That’s what I’m looking forward to most is proving a lot of people wrong. I’m ready to get down there and go on to Houston, Texas."

Ever been to Houston before?

"I only came down there on my visit and it was pretty good."

How he feels about playing with J.J. Watt:

Has he heard from J.J. Watt yet, and if so, what did he say?

"Yes sir, I just got off the phone with him. He says he’s going to stay on my butt when I get there."

"He told me he’s going to give me every piece of knowledge to help me improve my game. He’s going to show me like a mentor or big brother to me and I told him I appreciate that and I’m looking forward to working with him."

What have discussions with Head Coach Bill O'Brien been like?

"I thought it went pretty good. Bill O’Brien told me he wanted me and when I get down there that I’m going to be right there in his hip pocket and I told him I’m coming down to work for you and help the team win."

"Coach O'Brien said, 'I'm sticking my neck out for you. You've got to stick your neck out for me.'"  Clowney replied, "I'm not going to let you down."

What's the biggest thing he will bring to the Texans his rookie season?

"Hard work. Everybody says I don’t work hard, but they’re going to see when I get there. They are going to say, ‘This dude works hard’, and I’m a playmaker. I feel like I have a lot of playmaking ability. I am just looking forward to showing it off when I get there in Houston."

Can he play outside linebacker standing up?

"He says that he is going to push me hard and he’s going to stay on my butt. I told him that I am looking forward to that. I take coaching from just about anybody who knows more than me about the game.  I am just looking forward to working with him and getting it going with the Houston Texans."

How does he feel about being on the same team as D.J. Swearinger again?

"I think it will be great, man. Me and him have been talking about it ever since the season ended. He was like, ‘I hope you end up down here man, and we can bring this South Carolina down here to Houston.’  I said, ‘Man, me too.’ So that’s what we are trying to do."

What has Johnathan Joseph, another Texans player from South Carolina, said so far?

"He was like ‘Man, don’t let the media get to you and stay focused. Remember that it is a business and you just have to keep going and don’t ever stop working. Nobody knows what really goes on when the cameras aren’t on and everybody doesn’t knows what’s going on when the cameras off and seeing how hard you work. Keep working and get ready to prove a lot of people wrong.’ I hoped I would end up in Houston and that’s why he would say it to me."

Did he know Texans' Owner Bob McNair was also a graduate of the University of South Carolina?

"Yeah, I was aware. I like, ‘You went to South Carolina. He was like, ‘Yeah.’ I said, ‘I didn’t even know.’ That was about a month ago. Then I thought that might give me a chance to go to Houston, man."

How does he feel about joining such a strong defense #BullsOnParade ?

"I don’t think there could be a greater situation for me overall because I’m back with the guys that I know. I am working one of the best, if not the best, defensive lineman in NFL football; and one of the best linebackers in Cush (Brian Cushing) as a leader, which is going to help my game to go to the next level, in which I am so excited about because I’m getting to learn from guys and I think I just don’t really know how I feel right now."

Why did he select #90 for his Texans jersey?

"I can’t wear seven, and I wore 90 back in high school, and it was pretty good then so I wanted to go back to it." 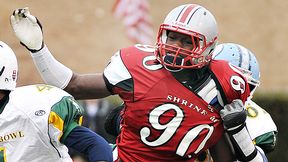 In High School: "Jadeveon Clowney was unblockable at the Shrine Bowl, as he was during his career; he had 84 sacks as a three-year starter." - Reported by Jamie Newberg 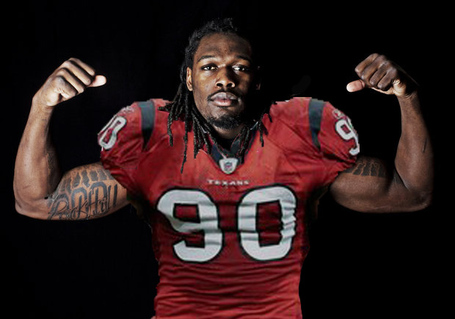 I love this selection for the Texans!  The Bulls On Parade are looking solid, and Texans fans have a LOT to be excited about.  May you enjoy your afternoon leading up to the second and third rounds of the draft, as the Texans have control of the first pick in each round again tonight!

Share your thoughts on Clowney's comments below, as well as any other draft thoughts and opinions.