T.J. Yates And "80 For 80" -- Analyzing (Again) The Drive That Put The Texans In The Playoffs For The First Time Ever

Battle Red Blog says goodbye (and now hello again!) to the quarterback that helped bring the city of Houston its first football playoff berth since...1993.

Share All sharing options for: T.J. Yates And "80 For 80" -- Analyzing (Again) The Drive That Put The Texans In The Playoffs For The First Time Ever

If you're new to the Houston Texans and are perhaps wondering why many Texans fans are excited about their team re-signing a career backup quarterback with a 3 to 7 TD/INT ratio, here's why. Read on and see how one of those three career TDs gave fans one of the most thrilling moments in Houston sports history.

It was a chilly December afternoon in Cincinnati when the Houston Texans came to town. Coming off a surprising victory against the Atlanta Falcons, quarterback T.J. Yates was ready to make his second-ever start for a team that took a flyer on him in the 5th round of the 2011 NFL Draft some seven months before. Sitting at 9-3, the team knew that a victory against the Bengals combined with a Tennessee loss to New Orleans would clinch the AFC South. If successful, it would be the first time the franchise would make the playoffs.

Yates' full drive is worth watching, again and again.

It's that kind of pressure that sat on Yates' shoulders before the game even started. And he would have to do it without star receiver Andre Johnson, who suffered a strained hamstring the week before. It was another in the long list of injuries the team suffered in 2011-- including the two injuries that thrust Yates into a starting role.

With 2:33 left in the 4th quarter, the pressure on Yates grew exponentially. Facing a defense that had already sacked him four times, Yates and the Texans found themselves at their own 20-yard-line, down 19-13 and with no timeouts. The drive was frantic and desperate. It felt as if the whole thing could collapse at any moment. A strip sack here, an interception there, or even just a turnover on downs. The Texans were mere inches away from failure.

Yates began the drive with completions to Owen Daniels and the ever-reliable Kevin Walter. The pass rush was swarming, but Yates made confident throws. However, with little more than a minute left, disaster struck and Yates took a sack for a five-yard loss. The play killed precious seconds off the clock and brought up a daunting 3rd and 15.

The Bengals brought the blitz again. A deft sidestep and a shoulder dip later,  the former Tarheel saw green grass in front of him. Surely, he must have thought he could at least get six or seven yards, setting up a much more manageable 4th down. 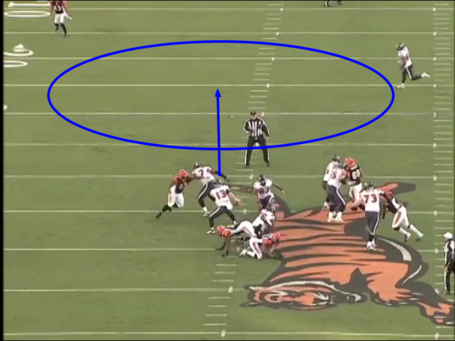 He hit the jets, crossing the line of scrimmage and noticing that the green grass kept getting greener. The secondary had their backs turned and Yates kept galloping. By the time it was over, it was a 17-yard scramble, but the overall distance he covered was closer to 25 yards. It was a first down conversion as unlikely as Yates' rise to the top of the depth chart. It wasn't pretty, but it was everything the team needed at that point.

"I felt like I was running forever. I bet I looked so slow. I was pretty gassed at that point."

After the spike, disaster nearly struck again. A pass off the fingertips of Owen Daniels nearly fell into the lap of Bengals safety Reggie Nelson. It was a lucky break, and the ensuing play would provide another: A pass interference penalty put the Texans at the six-yard-line. Six yards from history.

Another lucky break: Yates would take a shot to the leg during his next throw. Walter looked momentarily open standing at the goal line, but Nate Clements was lurking. The throw was altered and fell short, and a diving Clements nearly picked it off. If Yates hadn't been hit, Clements would still be running for a touchdown return to this day. Lady Luck, or Durga, or whatever football deity was finally smiling on the Texans.  It was time to win this.

The Texans would spread it out for the crescendo of this cacophonous symphony. 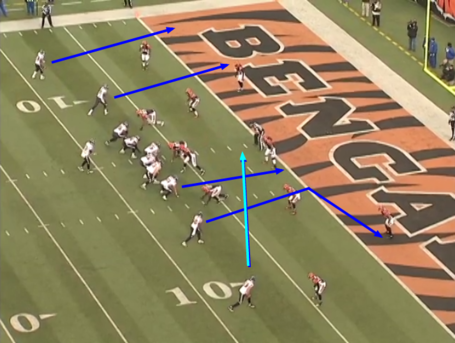 Kevin Walter is at the bottom of the screen. His job is to sneak inside while the other receivers pull the Bengals' defenders into the end zone. A little rub action by Owen Daniels and middle linebacker Rey Maualuga is helpless to stop Walter. Yates hits him perfectly. Touchdown. Euphoria.

It was magic. How else do you explain a 5th-round rookie, from a school that has never produced a starting caliber quarterback (and still hasn't?), leading his team into the playoffs? Maybe the Bengals were just bad. Of course, the magic would wear off. Yates is now off the team, but he'll never be forgotten for creating one of the most compelling story lines in Houston sports history.

Good luck in Atlanta, T.J.  Thanks for the memories. Welcome back, T.J. Here's your chance to make some new memories.