Last Monday, I published the first article in a four-part series detailing the famous Outback Bowl matchup between former South Carolina defensive end (now Houston Texan) Jadeveon Clowney and former Michigan tackle (now Tennessee Titan) Taylor Lewan. Every single snap in which Lewan and Clowney directly faced each other, whether on a run or pass play, was graded. Even if the sample size may be small compared to the total snap count due to alignment, assignment, or just plain not being anywhere near the designed play, only scoring snaps in which Clowney and Lewan actually had a chance to impact the play kept the tally as pure as possible. Regardless of who "won" or "lost" in these selected snaps, both Clowney and Lewan had to go through one another to earn their keep. I suppose you could consider this series the football personification of iron sharpening iron. These wins and losses on individual plays are added to the scoreboard on a weekly basis.  By the end of this series, we will finally be able to declare which one of these studs truly had the upper hand that day. So, without further ado, on to the second quarter.

The Score So Far

Though Clowney did not do anything statistically significant in his first snap against Lewan of the second quarter, his presence alone showed its value by drawing not one, not two, but three blockers in the red zone. Let’s take a closer look at the impact Clowney had just from being on the field.

Michigan has dialed up a sprint option play towards Clowney in an attempt to stress the South Carolina secondary past its breaking point. The Michigan offensive line washes down towards the "play side", which happens to be the same edge that Clowney is currently patrolling. In order to ensure that he cannot penetrate inside, outside, or through Lewan to disrupt the play, the Wolverines allocate the left guard and running back to help keep Clowney in check. If successfully blocked, either the in-line tight end, fullback, or wide receiver should be able to eventually break free while "flooding" half of the end zone. 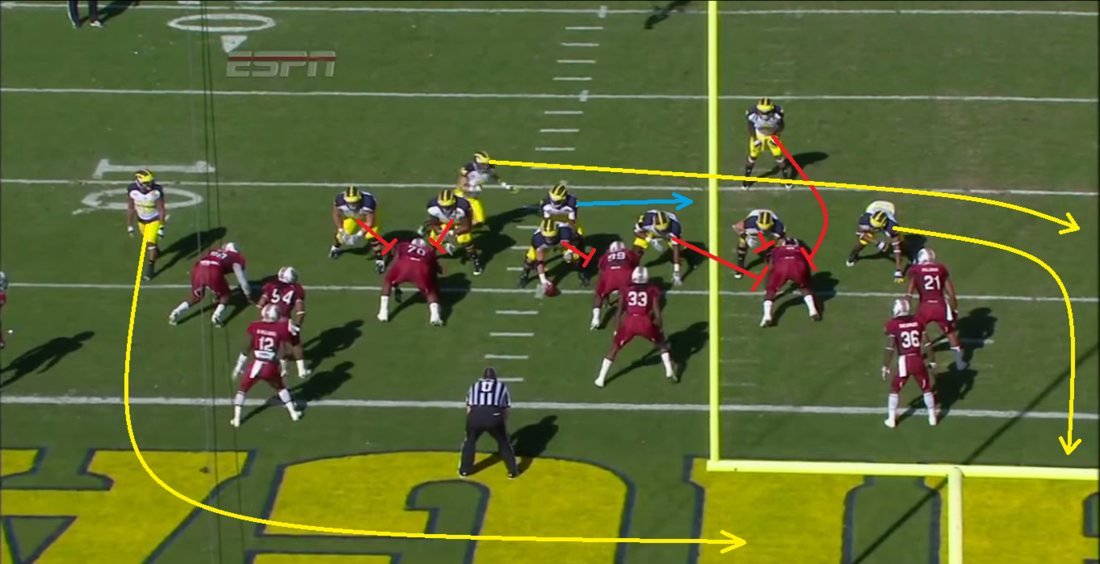 After slightly shifting inside to a 5i (lined up over the inside half of the tackle) on the fullback’s motion, Clowney is doubled teamed by Lewan and the left guard. As illustrated by the blue lines, strong safety – and now Texans safety/teammate – D.J. Swearinger picks up the tight end while the right outside linebacker picks up the fullback in the flat. The Mike linebacker tracks the quarterback (orange line), and the running back gets wide in order to set up a crack block on Clowney. 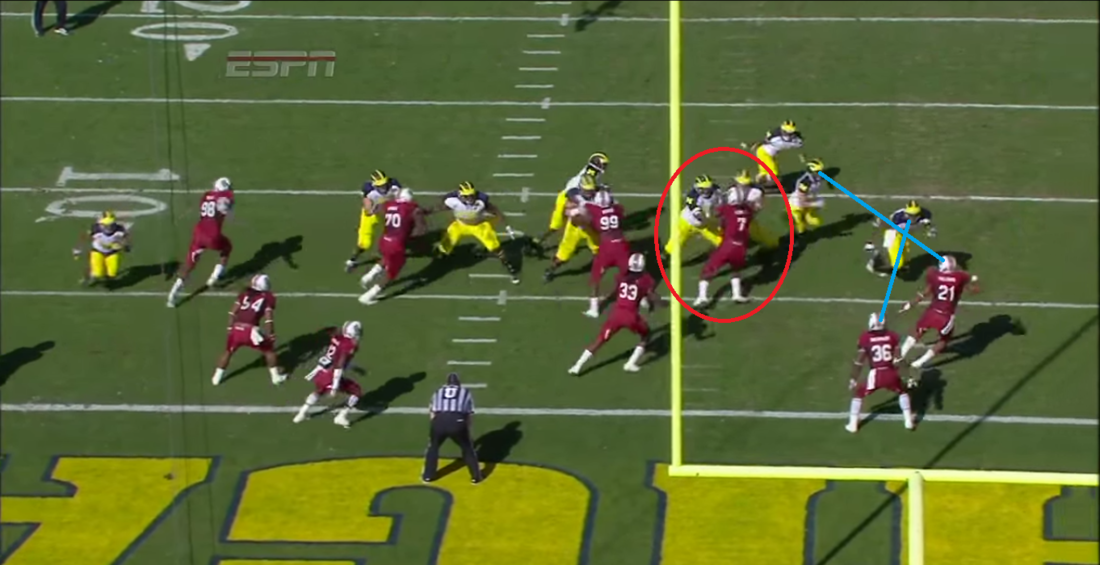 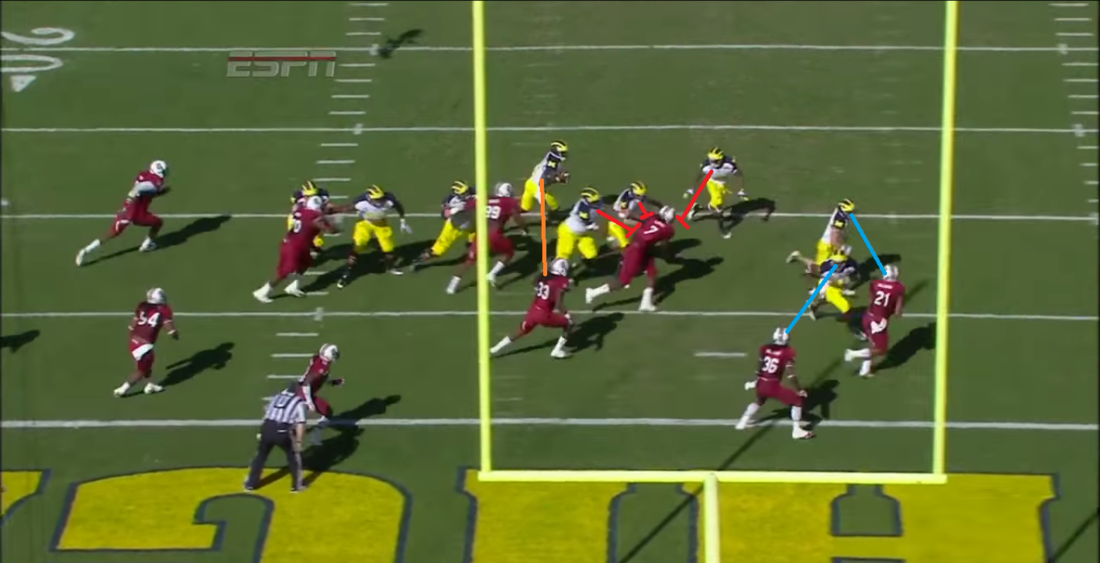 At this point in the play, everything should be going according to plan for the Gamecocks. Clowney has absorbed so much attention that South Carolina has enough men to account for both receivers and the running threat of the quarterback. Unfortunately for Clowney, however, the effect of his presence was wasted when the outside linebacker peeled off of his man in favor of trying to put a hit on the quarterback. Rather than let the Mike backer do his job, the outside backer left the fullback wide open in the flat for an easy touchdown. Despite being so dangerous that he set up the rest of his team for success just by lining up, Clowey was let down by the other ten men in the South Carolina defense on this one. When playing next to elite talents like J.J. Watt and Brian Cushing next season, it is safe to say that Clowney will have a significant weight lifted off his shoulders on every down. 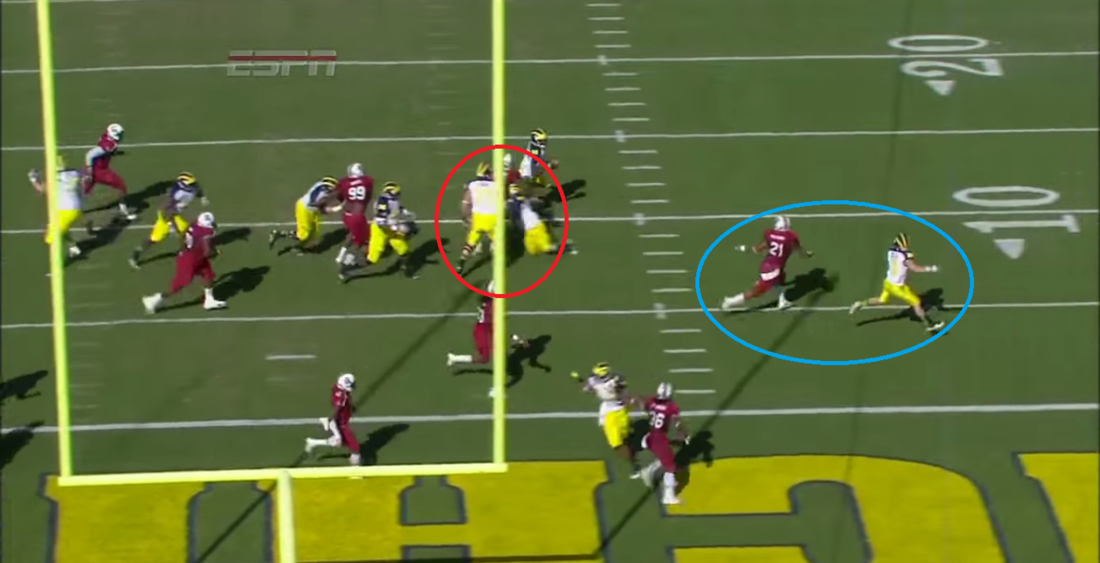 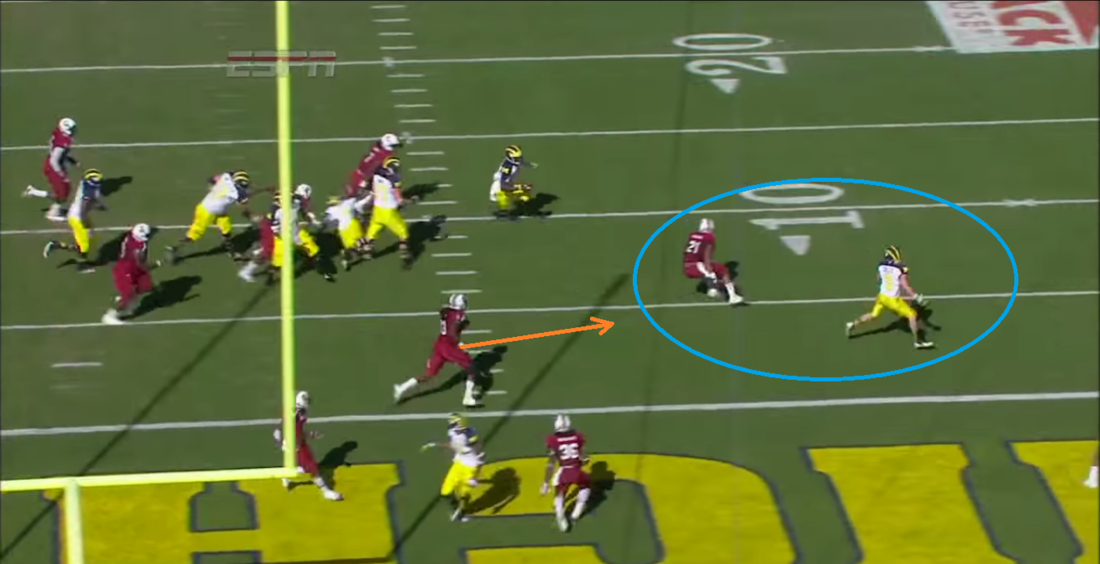 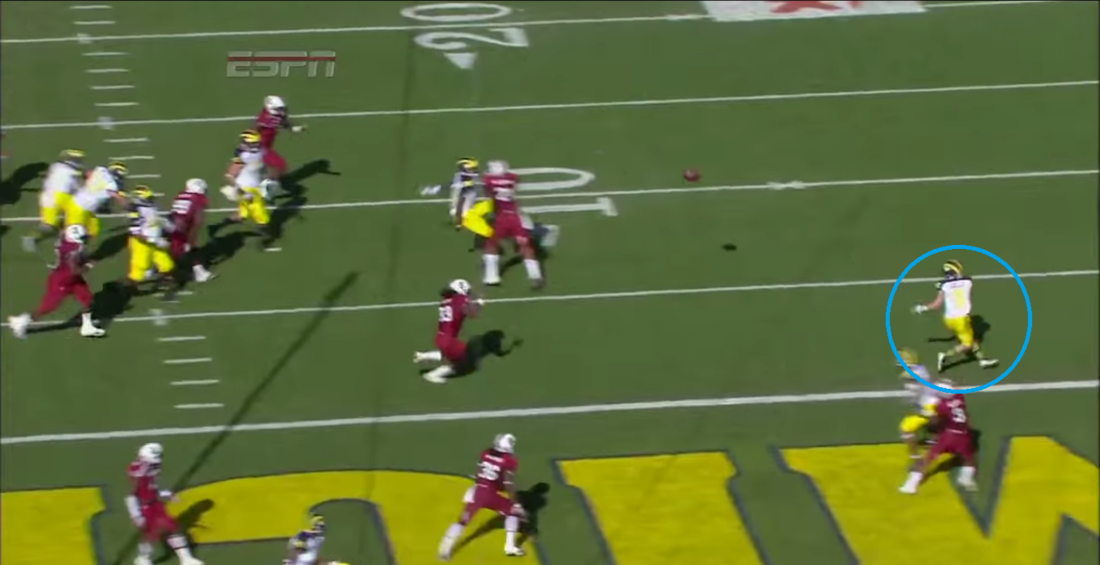 The Wolverines may have scored on this play, but Clowney did his job and then some by demanding three blockers just to give the offense a chance at success. I’ll call that one a win.

Clowney’s second meaningful snap against Lewan in the second quarter failed to produce any tangible individual statistics (again), but it is a great example of how he can single-handedly blow up a play without getting any official credit. Michigan is running a power sweep out of shotgun, with the right guard pulling and leading the running back to the second level. If the receivers hold their blocks on the outside, there should be a sizable lane for the back to break off a big chunk of yardage. 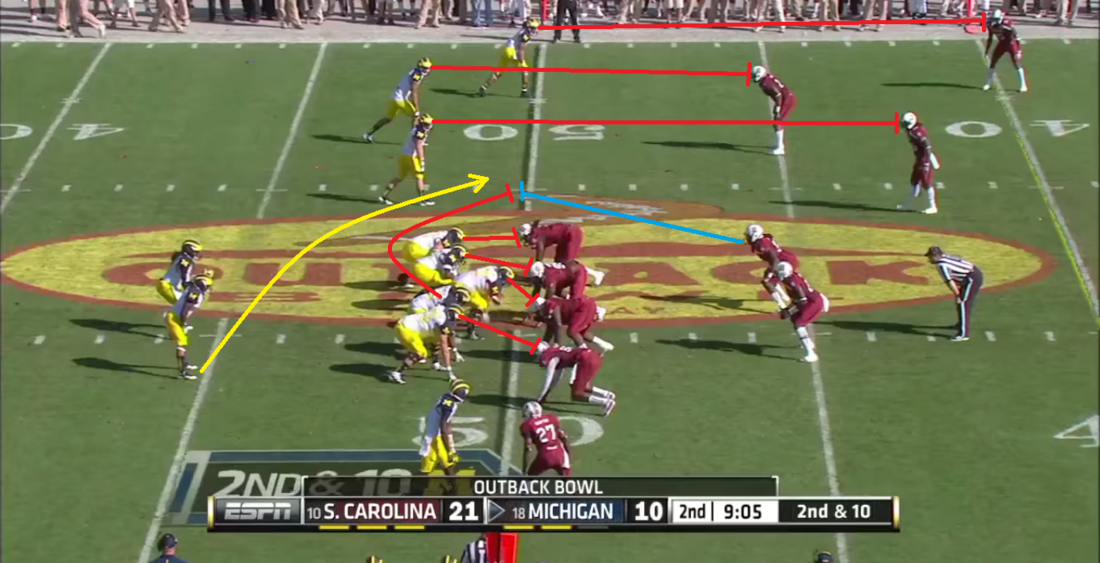 Clowney is obscured by the left guard a bit in this angle, but his superb quickness off the snap helps him immediately beat Lewan to the inside. 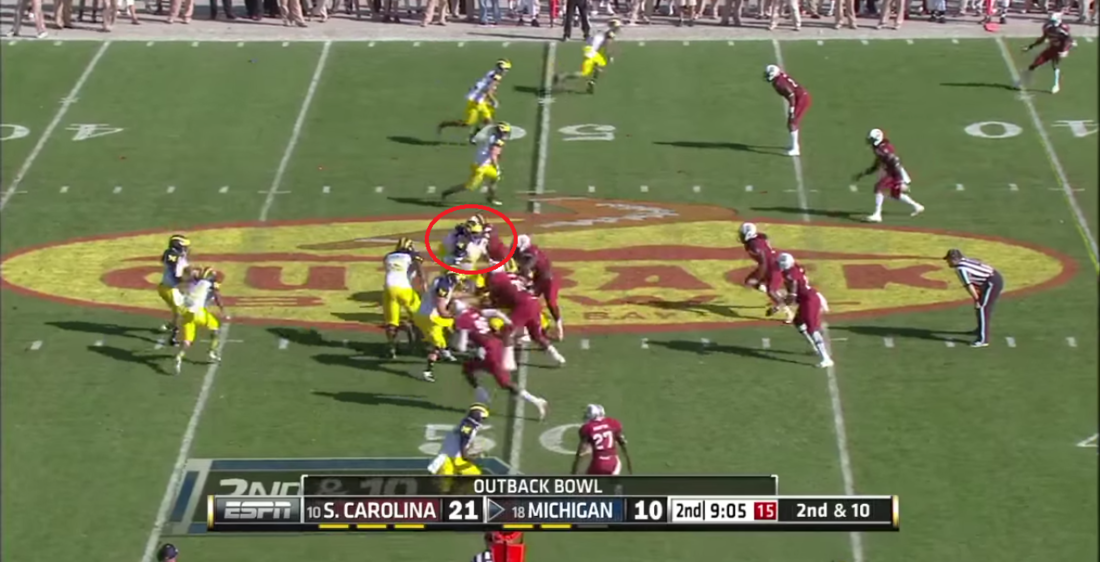 In fact, Clowney wins so fast that he knocks the pulling guard off his trajectory just as the running back is being given the hand-off. 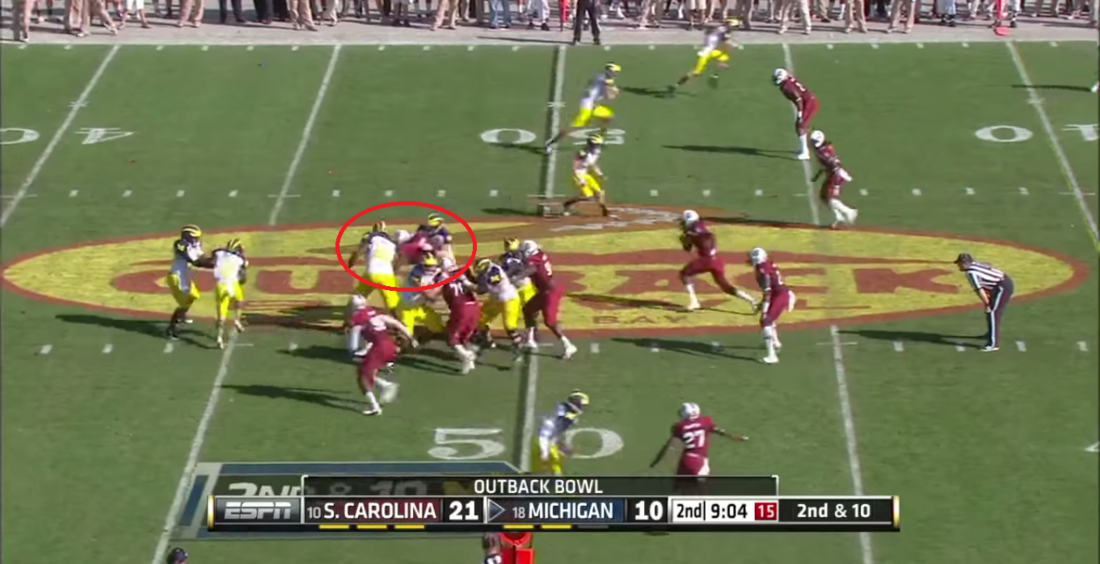 With the guard being held up by Clowney’s penetration, the middle linebacker (blue circle) is free to track down the running back unopposed. Meanwhile, D.J. Swearinger is defeating his blocker on the second level (orange circle) and is about to rally to the ball carrier as well. With no blockers out in front of the ball due to Clowney’s disruption, this play is dead before it even gets started. 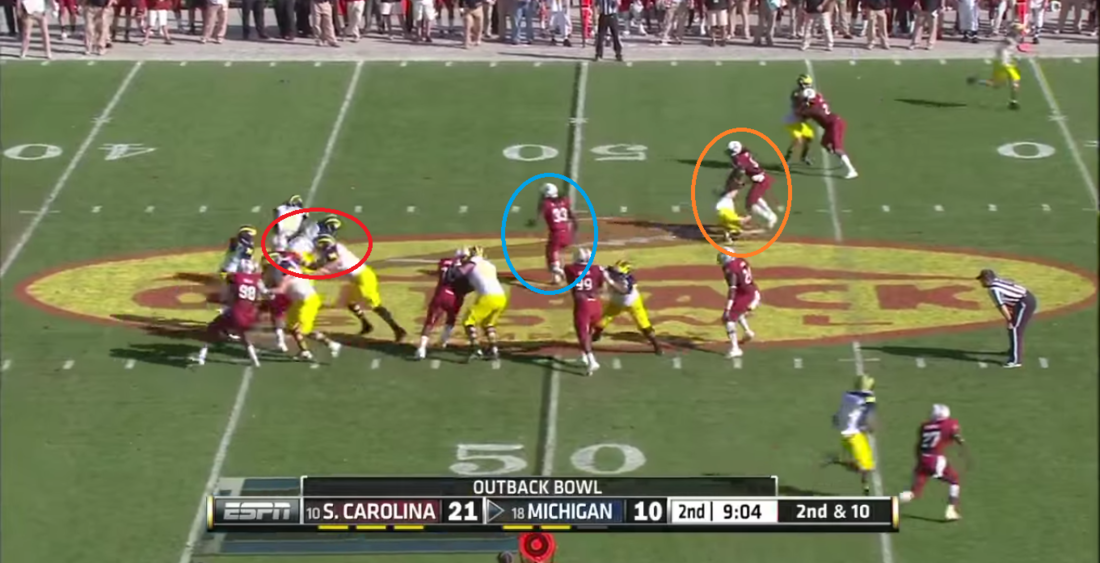 The Mike linebacker misses on a big would-be tackle for loss, but Swearinger still manages to take down the running back for no gain and force a fumble. 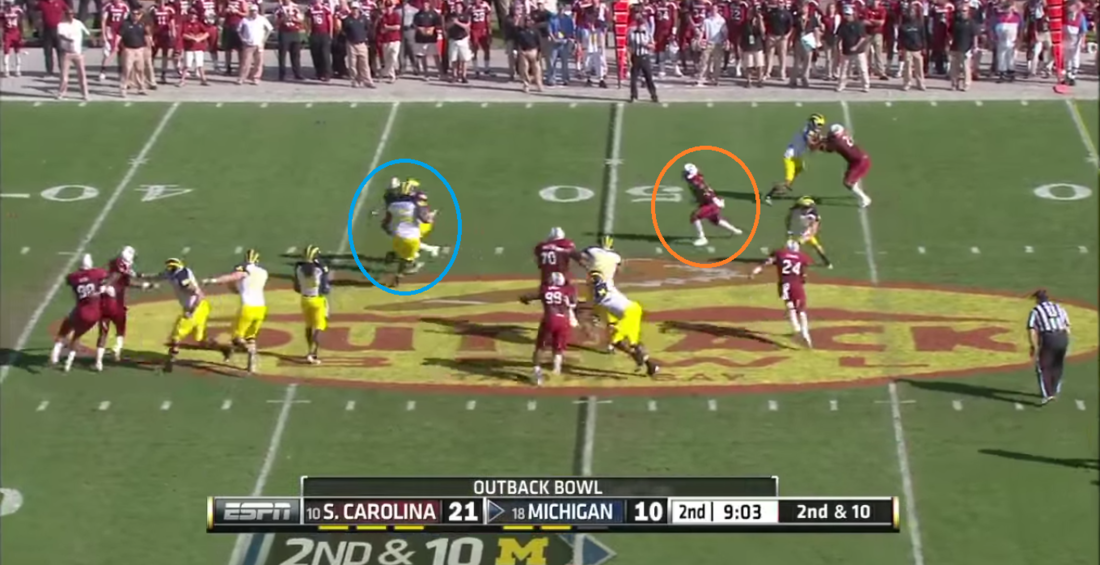 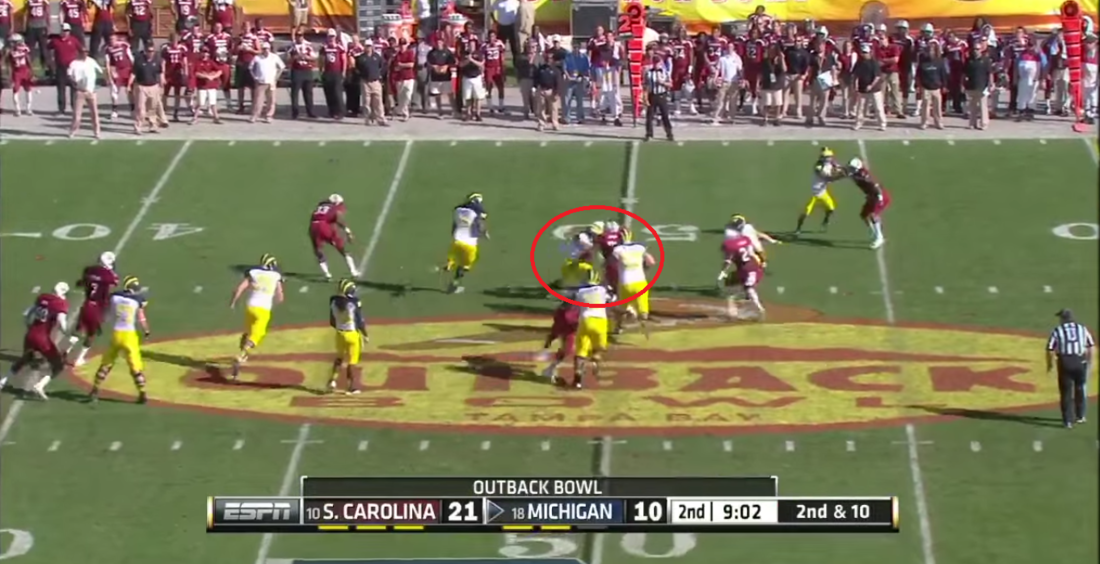 When draft pundits repeated the mantra over and over that Clowney’s impact was not measured in personal stats but in the big plays that he created for the rest of the Gamecock defense, this was exactly the kind of thing they were referring to. Taylor Lewan was arguably the best left tackle in the country in 2012, and Clowney beat him so swiftly that he managed to indirectly snuff out the whole play before the ball even got in the running back’s hands. If that is not a win for Clowney, I don’t know what is.

Lewan gets his first win of the second quarter by (yet again) stonewalling Clowney’s jab-swim combination that was featured prominently last week. Lining up way out wide on an obvious passing down lends itself well to speed rushing and bull rushing, but trying to jump inside from that width is extremely difficult, simply because the tackle can easily see it coming with all that open ground to cover. I suppose that is why it bothers me so much that Clowney insists on throwing that inside jab even from this alignment; if it is a move that is unlikely to work from that alignment, why threaten Lewan with it in the first place? Lewan already knows that Clowney likes to fake one way and go the other, and he is well aware that an inside rush (without a stunt) is very difficult to find success with from that wide of a stance, so why even bother with it? Clowney wasted his effort with this same combination for the umpteenth time, so Lewan was ready for it and immediately countered in the same way he countered throughout the first quarter – by giving Clowney a shot to the ribs. 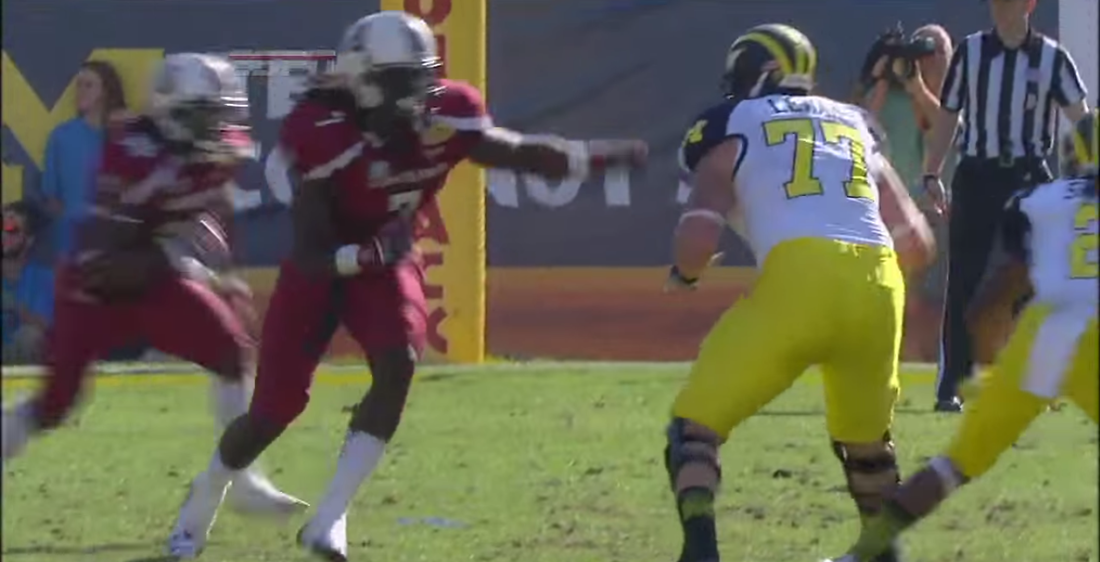 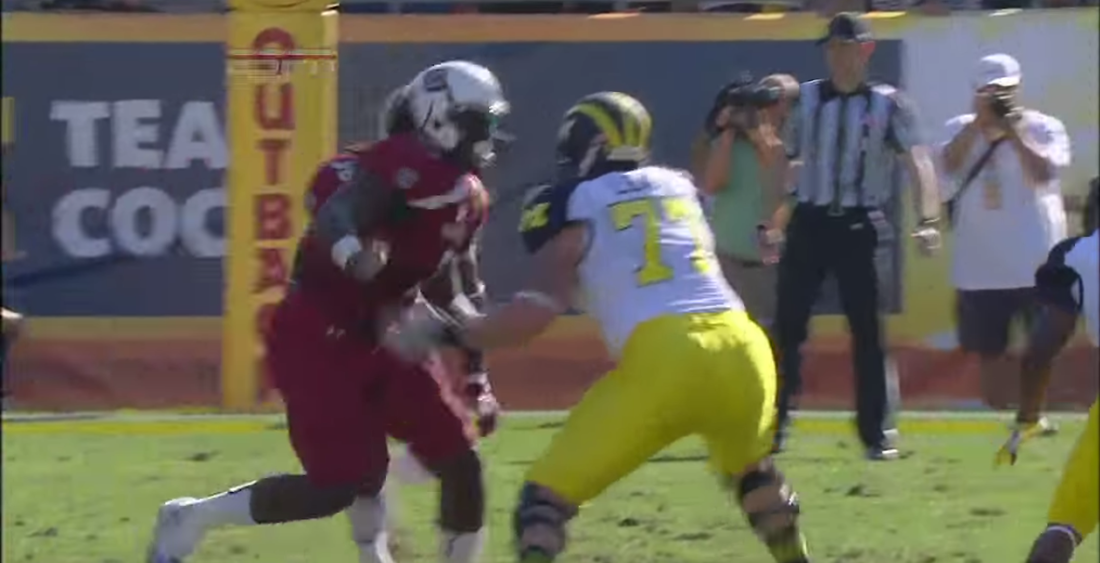 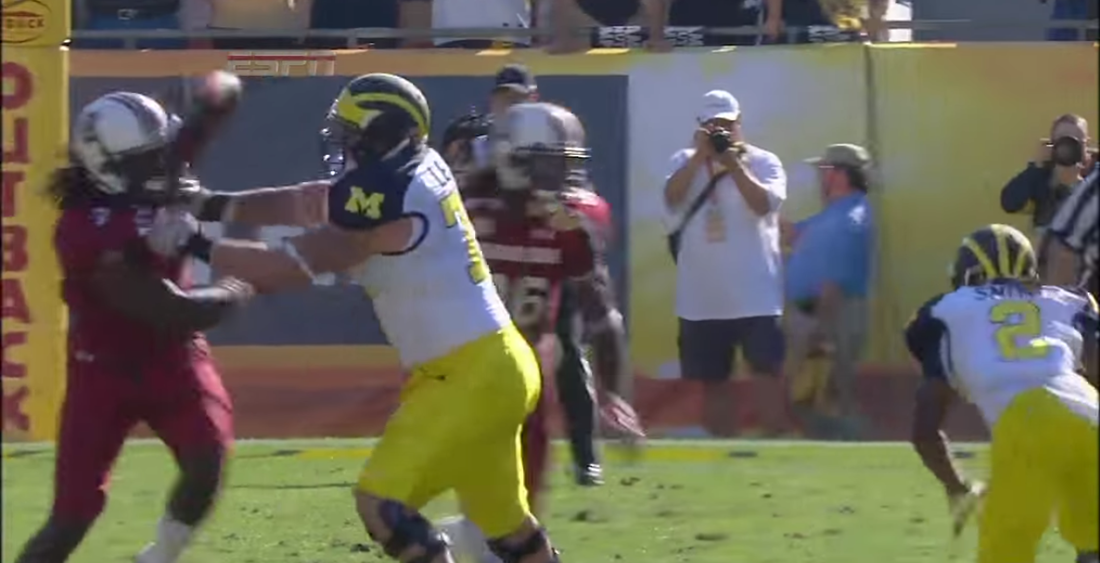 As an added bonus for Lewan, counter-punching Clowney’s exposed chest and ribs during the arm-over move knocked Clowney slightly off balance. With compromised balance, Clowney could not finish the downward club at the tail end of the move with sufficient power to disengage Lewan’s hands from his chest. That "club action" at the end of the move is what separates a good arm-over from a bad arm-over.  Not being able to neutralize Lewan’s grip after the counter punch made this a no-brainer loss for Clowney in my book. 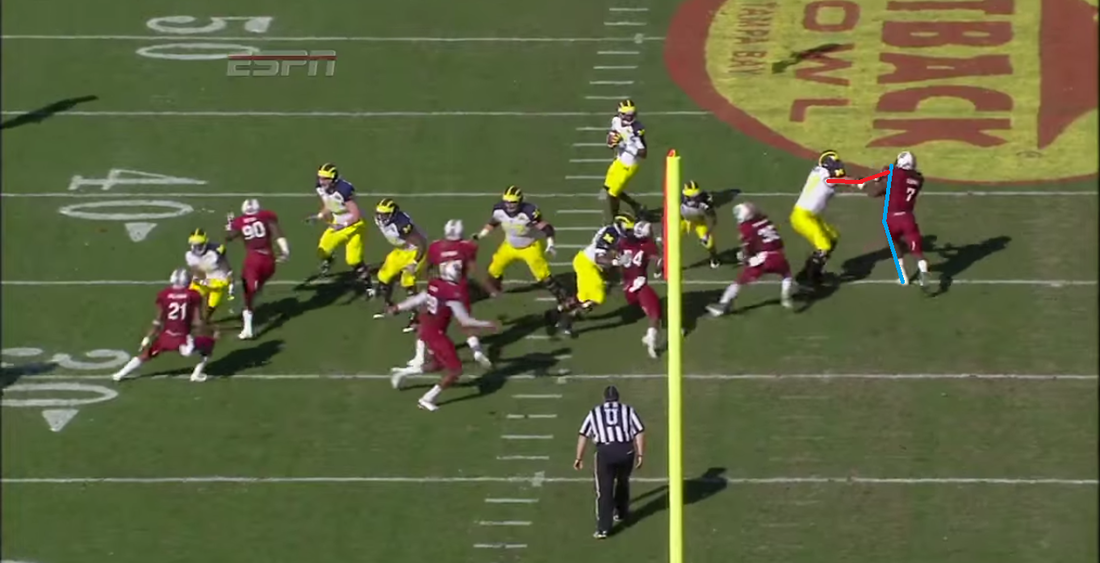 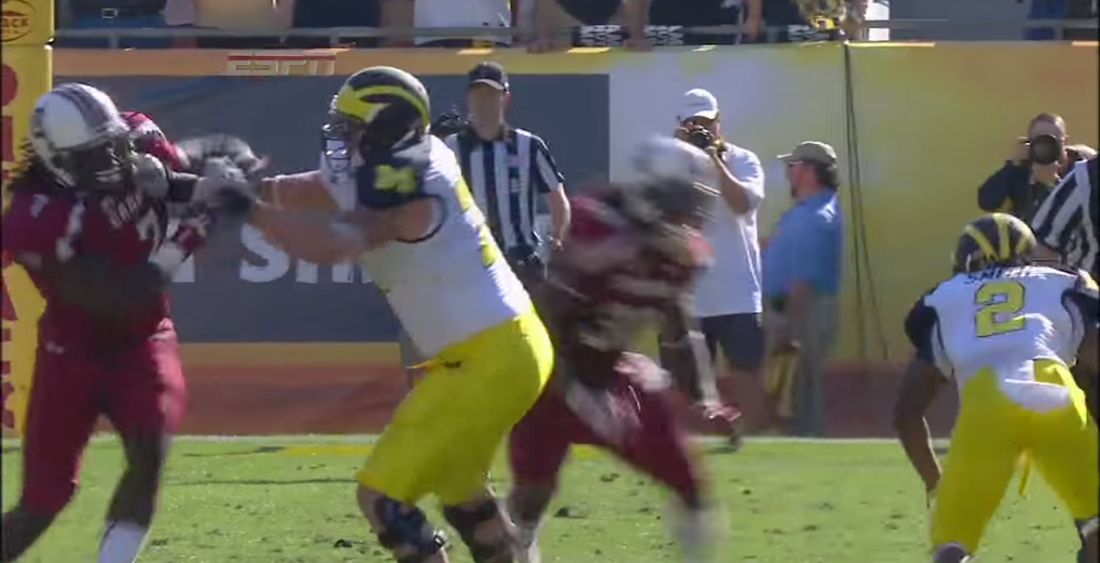 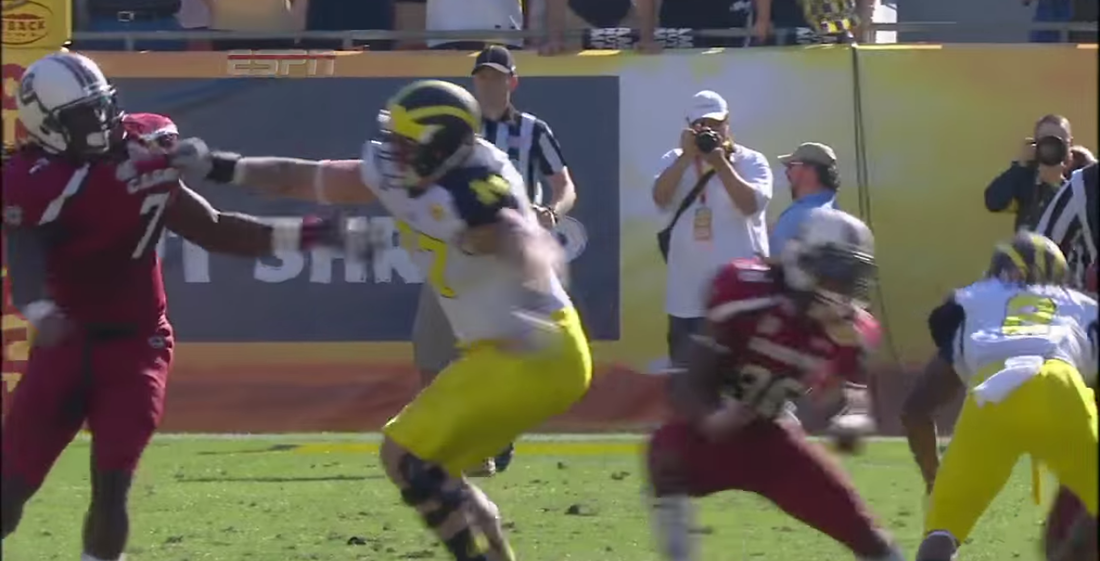 Taylor Lewan was fortunate enough to have been bailed out by the left guard during a Jadeveon Clowney bull rush in the first quarter. In the second quarter, he was not so lucky. The left guard takes a second at the top of the snap to give a quick punch to the nose tackle, but before he can even turn around to check for Clowney, Lewan is already being forcibly escorted into the quarterback. Keep in mind that this is only Clowney’s second bull rush of the entire game, and on both occasions he immediately put one of the best tackles in the country on roller skates. The power put on display here is not just impressive.  It’s downright frightening. Lewan has no choice but to resort to holding both Clowney’s jersey and facemask, which earns him his second penalty of the half and a loss of ten yards. Point for Clowney.

In the last relevant snap between Clowney and Lewan of the second quarter, Clowney throws down another jab-swim combination. Predictably, Lewan easily counters it yet again. The pattern is well established by now, and my main criticism remains the same – Clowney really needs to learn how to attack the edge with his speed off the snap rather than just as a counter move to something else. Versatility is one of the greatest weapons in a pass rusher’s arsenal, and he does not quite have it yet. I have said it before and I will say it again – if Clowney can put J.J. Watt’s technique into his body, nobody on the face of the planet will stop him. Ever.

We are all tied up going into the half at five apiece. Will Clowney build on his momentum going into the third quarter, or will Lewan continue to hold off the South Carolina monster with his fantastic footwork and hand usage? Find out next Monday as we dive into the third part of this legendary showdown.