Take a look at the Texans training camp roster for the defensive players. We'll consider a possible depth chart, and where these players were taken in their respective draft class.

I thought it would be interesting to create a visual representation of the roster and to consider the Texans' investment in draft picks over the years.  Since we have players who were drafted, or signed as undrafted free agents (UDFAs), by other NFL teams prior to joining the Texans, I used a different color to represent them on the chart.

Let's start this off with the new roster for the defensive players, and we can review the offense in another article.

As far as a true depth chart goes, please do not take this as anything official.  Obviously this is VERY dynamic heading into training camp with entirely new schemes on defense and offense.  I also didn't account for things like nickel-back, dime-back, whether Brooks Reed will actually play inside linebacker in 2014 or remain outside, etc.  I also didn't attempt a pure scheme fit for each player's role on weak-side, strong-side, and so forth.  There is a lot of flexibility in how these players will be used in any real games, so this is just a snapshot visual to digest the player's draft history, NFL experience and the overall depth the Texans have heading into training camp. 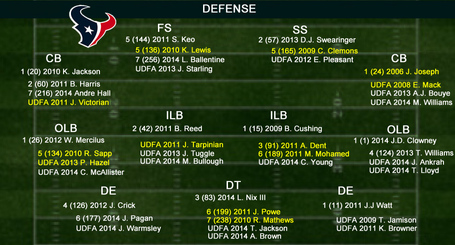 NOTE: Yellow text denotes players who were drafted, or signed as UDFAs, by other NFL teams prior to joining the Texans.

The first thing that jumps out at me is the massive investment the Texans have made with high draft picks on defense.  Six of the projected starters were first round draft picks, with two other starters selected in the second round.  I include players like Johnathan Joseph in that investment as well.  While the Texans didn't use a first round draft pick to get Joseph, they invested in a large contract to bring him here in free agency as a first round quality veteran player.

The other thing that catches my eye is the wall of linebackers we have going into camp this year.  Coach Mike Vrabel must be bouncing all over the practice field with so many guys to coach up.  Hopefully that leads to better performances on special teams and improved depth once the final 53-man roster/depth chart is established.

I think it is safe to say that the ever-elusive space-eating nose tackle situation appears to be more than remedied.  In the voice of Foghorn Leghorn; "One of these guys, I say, ONE of these guys has GOT to be a nose tackle."  MDC would be so very proud of the collection of "Monte Cristo" worthy candidates the Texans finally have anchoring that defensive front.

The cornerback and safety situation looks questionable on the surface, but we do hear good things from some of these young players.   I sure hope some of those guys are diamonds in the rough, and that Brandon "No Fly Zone" Harris has a breakout year in 2014.  While we may have the "Armageddon front seven" in this year's NFL, that back-end looks like a shooting gallery for any elite quarterback.

What are your thoughts as you consider this throng of players heading into camp to try and join a defense led by Watt, Cushing, and Joseph?  Who are you looking forward to seeing in action during camp and preseason games?  Who will have a breakout season?  The floor is yours for commenting.