Part III of Battle Red Blog's film study series on Texans pass rusher Jadeveon Clowney and Titans offensive tackle Taylor Lewan continues with the start of the third quarter. See who comes out swinging as this matchup enters the second half.

If you have not been keeping up with Part One or Part Two of our Title Fight series, here is a quick recap to get you caught up.

1. The score is currently tied at five apiece.

2. Both Jadeveon Clowney and Taylor Lewan only scored their respective points by beating each other. Only snaps in which Clowney and Lewan directly engaged one another and had an opportunity to impact the play – whether run or pass – were scored.

3. Jadeveon Clowney has a frighteningly strong bull rush that can tear through offensive linemen like paper.

4. Taylor Lewan has really, really good feet. Someone as big as he is should not be able to kick slide that fast with such balance.

5. Clowney’s favorite move to this point, perhaps to a fault, is threatening an inside move with a jab step and then delivering a counter-swim move to the outside. Almost every time he has used that move thus far, Lewan has effortlessly countered with a punch to the ribs to throw Clowney off balance and immediately neutralized him as a threat. A good chunk of Lewan’s points have come from continuously beating this move from Clowney in pass protection.

6. In the first two quarters of the game, Lewan was assisted against Clowney with a double team three times and a triple team once.

With that, on to the third quarter.

I am not entirely sure what Clowney’s defensive line coach told him during halftime, but I bet it went something like, "Hey, try going inside for once, eh?".  Clowney did just that in his first snap against Lewan of the third quarter, and boy did he put on a show. Clowney takes one step off the snap, plants with his right foot, and explodes across Lewan’s face into the B-gap.

Despite not really using any sort of refined technique to slice through the line, Clowney’s absurd quickness and speed allow him to catch Lewan off guard just enough to get free. Were it not for the running back helping to slow down Clowney with a helmet to the groin, Devin Gardner might have been in for one hell of a smack after releasing the ball. 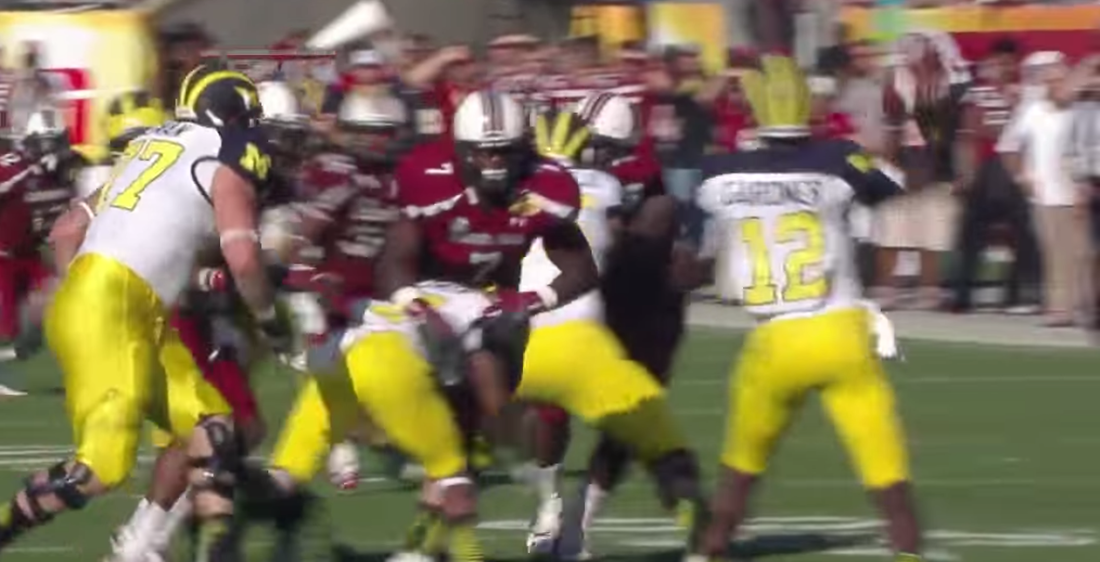 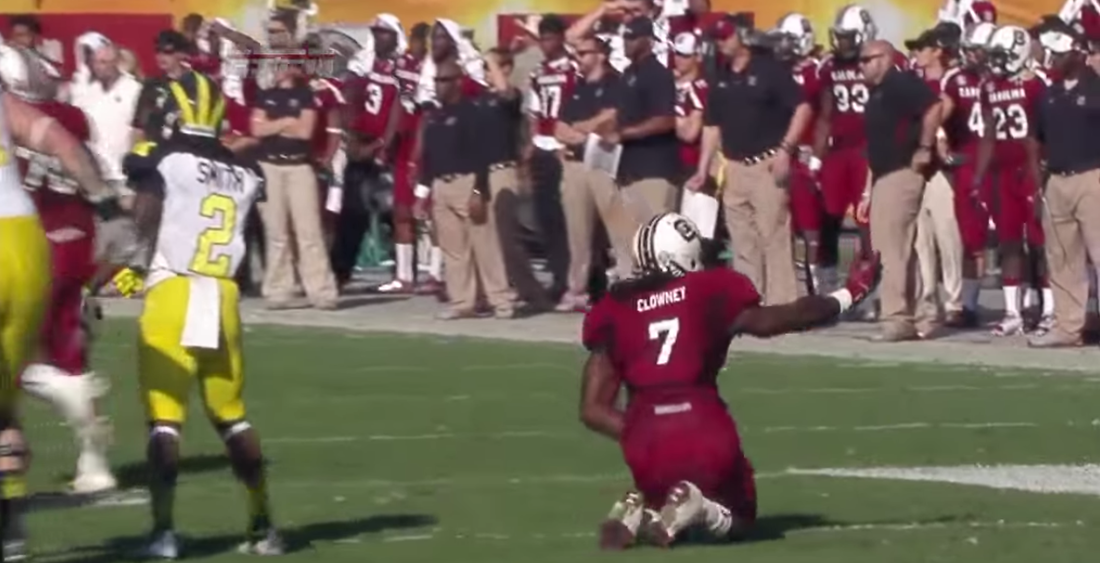 The second direct engagement between Clowney and Lewan doesn’t come until late in the third quarter due to Lewan being sidelined with an injury. Despite being slightly nicked up, Lewan is still a dominant pass protector.

Upon closer inspection of this play, you might notice something even more interesting than Lewan handling his business on the edge – Jadeveon Clowney trying a hump move. What is a hump move, exactly? I’ll let Oliver Gibson take it from here.

I personally find it extremely exciting that Clowney even attempted something as advanced as a hump move. That alone tells me that there is more to Clowney as a pass rusher than just the jab-swim. He has shown an incredibly powerful bull rush, an ability to penetrate inside with quickness, and that jab-swim to the outside. Now with the hump move, we are starting to get a glimpse of the athletically gifted technician that Clowney could become if he keeps developing. Let’s break this move down frame by frame.

Clowney is lined up in what appears to be a 6i technique (based on this angle), shaded just inside the tight end. 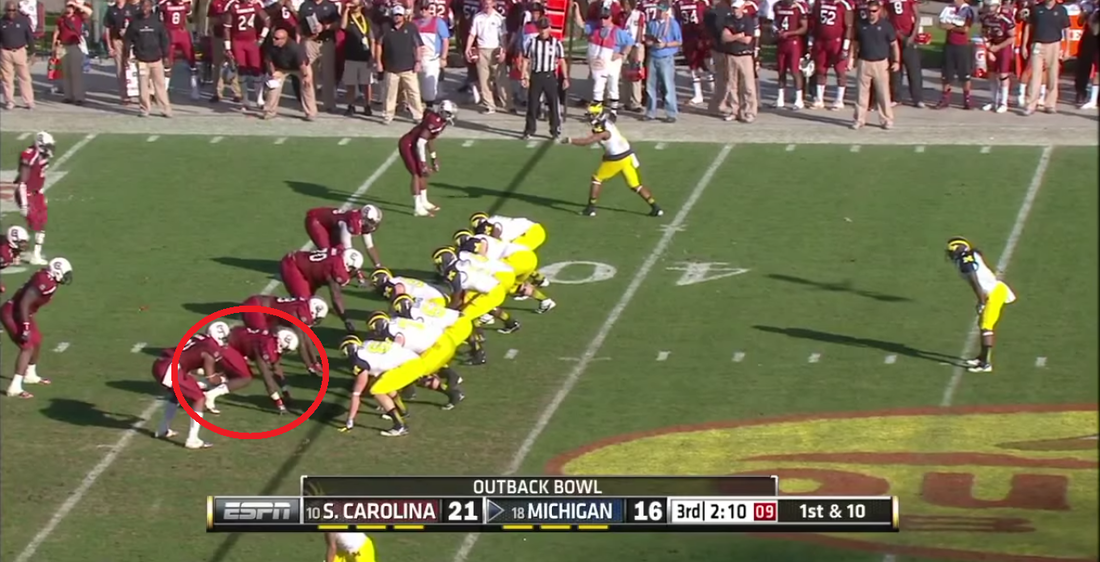 Clowney explodes off the ball into Lewan’s outside half with a bull rush and starts turning him up field. 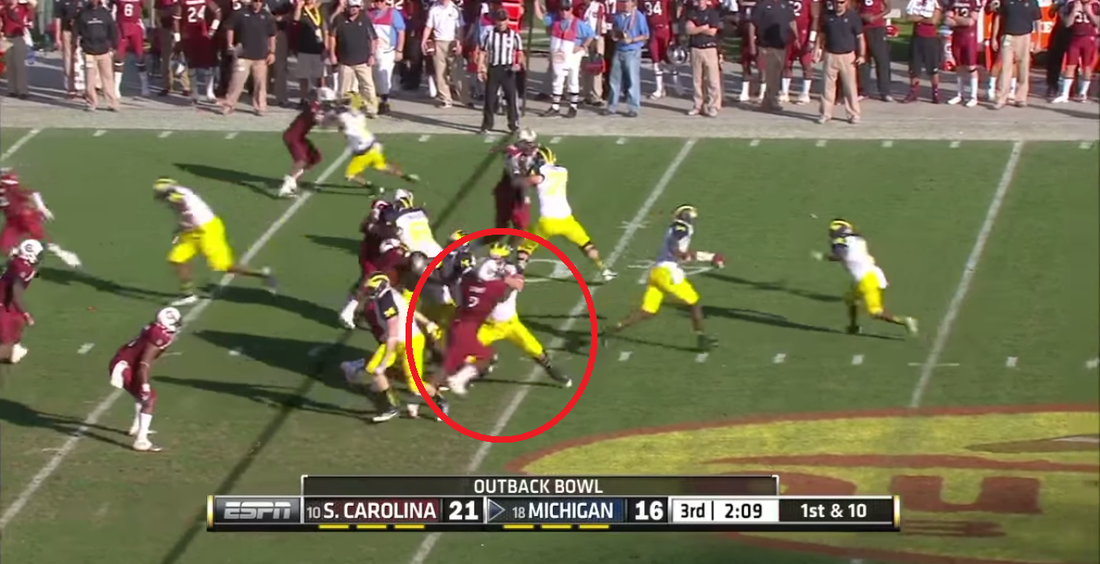 After getting Lewan’s shoulders vertical, Clowney goes for a rip move to disengage Lewan’s hands from his chest and get around the edge. 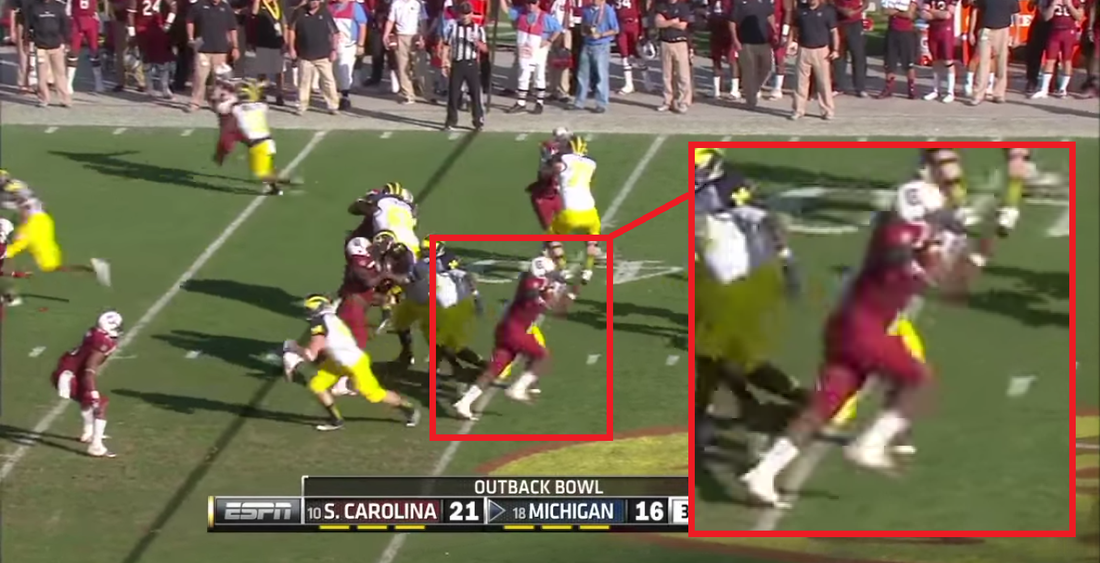 Here is where Clowney makes his mistake. After faking the rip move, Clowney pulls out of it and tries to give Lewan a "hump" into his ribs to force his momentum further up field. The mistake, however, is that Clowney should have stuck with his rip move the whole time. Lewan does not get far enough up field before Clowney tries the hump, so he can’t quite reach Lewan’s ribs to force his momentum past the quarterback. If Clowney waited a half second longer for Lewan's shoulders to line up with his own, this might have worked. Compounding the issue even further, Lewan gives Clowney a perfectly-timed shove as he pulls out the rip – likely to counter the expected "dip" from Clowney – which throws Clowney off balance himself. 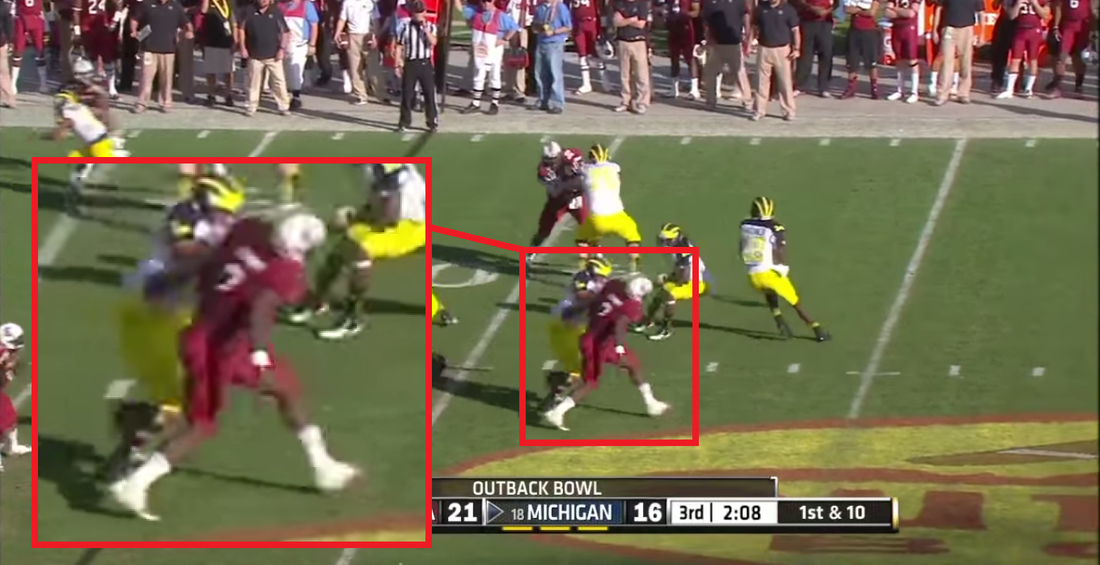 With compromised balance and a mistimed hump, Clowney is easily wrangled by Lewan and neutralized until the ball is released. Ironically, if Clowney stuck with the simpler move and just kept ripping around the edge, he might have had a shot at a sack. 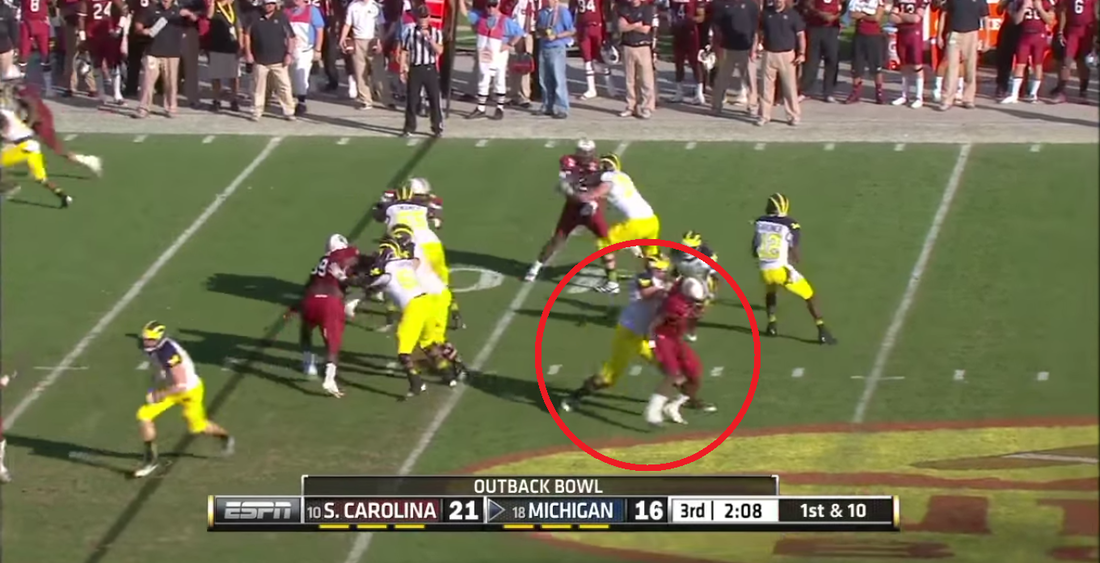 When to use what move will be something that Clowney learns in time, but I loved the fact that he attempted a move this complex in the first place. The only thing I loved more was Lewan’s response to Clowney’s creativity. The man sure has a knack for timing his punch.

The third and final head-to-head snap of the quarter is yet another display of what Clowney is capable of. Clowney comes off the ball with his typically ludicrous quickness, which forces Lewan to slightly "overset" to the outside to handle all that speed. Clowney sees the gaping hole between Lewan and the guard.  He counters with a quick swim to the inside that leaves Lewan grasping at air. Lewan did not even have time to swivel his hips back inside before Clowney was already blowing by him. Even when the guard tried to keep Clowney contained with a double team, the former Gamecock used another swim move while also running into the center to penetrate further into the back field. That is a lot of bodies for one man to fight through.

Had Clowney been "just" one-on-one with Lewan here, there is no way that Devin Gardner avoids getting crushed for a huge loss on third and five. Instead, Gardner was able to break free for a first down. With Clowney sharing the line of scrimmage with J.J. Watt, Whitney Mercilus, and Louis Nix next season, he will get one-on-one opportunities, and he will turn those into sacks. If there is one thing I am sure of for the 2014 season, it is that Jadeveon Clowney is about to show the world what he can do when he is not a marked man. This Texans' front seven is going to be stupid for the next few years. Just downright stupid. Why is this even allowed?

Join Battle Red Blog next Monday for the conclusion of the Title Fight as we enter the home stretch in the fourth quarter. Can Lewan bounce back and reclaim his lead from early in the game, or has Clowney asserted his dominance for good? Find out next week.