I listened to this song for the first time in a few years, and it reminded me of its creepy-awesome music video. Check it out.

Did anyone go to the Beyonce concert last night here in Houston? Forced or otherwise. Did you happen to see the exorbitant parking fees? Someone on Reddit Houston did. 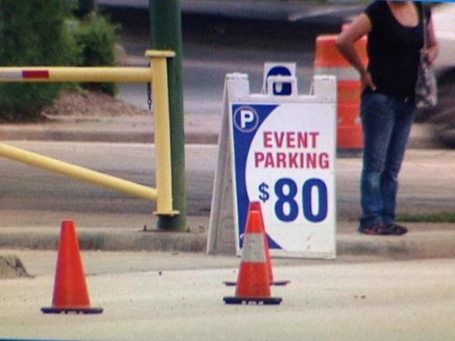 It's interesting to see how music labels are shifting their focus from album sales, which are plummeting, to concert revenues. Since free music downloads are so prevalent now, they are focusing on sharing the profits of concerts and merchandise, according to this article on Vox.com.

Only five records have sold over 500,000 copies so far in 2014, compared to 11 this time in 2013. (The notable exception is the Frozen soundtrack, which has sold 2.7 million copies so far; the next highest seller is Beyoncé's self-titled album is at 702,000.) That's why the industry has has increasingly moved to so-called 360 deals that place far less emphasis on an artist's album sales in favor of taking a cut from touring, merchandise, and licensing.

Music labels might soon be going the way of the typewriter.

This caption article featuring Matt Schaub's depressing mugshot is brilliant and makes me wish I'd thought of it when I posted it a while back. Be sure to add your own.

Any leftover soccer fever at all or are you all in for football season to start? I'm thinking of choosing an English Premier League team to follow. Possibly Everton? They currently employ Great American Hero Tim Howard. The season starts up August 16, and you can catch the games on TV via NBC, apparently.

Feel free to talk about any or none of this tonight. Happy Saturday.