Who Do You Think You Are, Jaguars? Jacksonville's New Big Screen Now Biggest In NFL

The Jacksonville Jaguars are proudly displaying the improvements to EverBank Field, going so far as to use billboards to tell their fans about them.

Share All sharing options for: Who Do You Think You Are, Jaguars? Jacksonville's New Big Screen Now Biggest In NFL

I thought you'd be interested in seeing this, just in case you're not a regular over at Big Cat Country, SBNation's site for all things Jacksonville Jaguars. Since taking over ownership of the team, Shad Khan has been busy trying to grow the Jaguars' brand in one of the country's smaller markets. As in so many areas of life, money talks, as you'll see below. 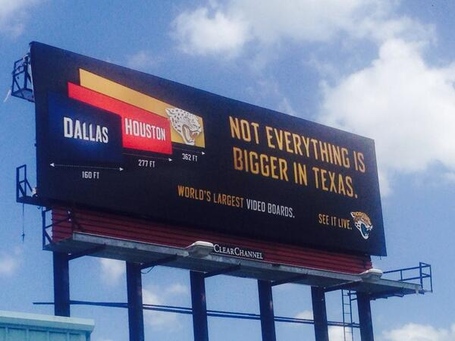 To my great shame, I didn't attend a Texans game in 2013 and now I'll never be able to say that I saw the World's Largest Video Board. I'll go this year and have to look up in disgust at the World's Second Largest Video Boards. They might as well tear them down. Add this to the fact that we literally lost to the Jaguars twice last year, and this is increasingly becoming a world I don't want to live in anymore.

While I have seen the Texans' video boards in person, it wasn't at an actual game.  I hope to fix that as soon as possible.  Jokes aside, I hope Jaguars fans enjoy the new improvements.  Feel free to leave your thoughts on this affront to our honor down below.