Proudly distributing sensationalized rubbish since 2010, Battle Red Onion gives you the full scoop on Tom Savage's shocking induction into the Pro Football Hall of Fame and the blonde beauty that got him there.

Houston Texans quarterback and former Nicholas Cage stunt double Tom Savage announced on Wednesday via Instagram that his smoking hot girlfriend had accepted his marriage proposal. Little is known so far about the bride-to-be except that her name is Catherine and that she is, in fact, exceedingly beautiful. The news garnered much more attention than the usual engagement announcement, however. 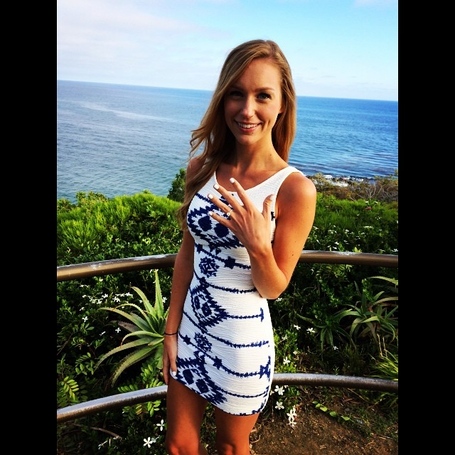 The future First Lady of Tom Savage's heart showing off her engagement ring.  Not pictured: The sunken ships she lured to the rocky shore with her siren song.

Despite not having yet played a single down of professional football, the fourth-round rookie out of Pitt has already fulfilled his lifelong dream.

"I've been working towards this my whole career," said Savage early this morning via conference call. "So many great players come and go without accomplishing this, and now here I am in bed naked with this blonde, sex goddess. I'm spooning with her and everything." After repeated inquiries, Savage went on to clarify that he was the little spoon "as usual."

"This is certainly unprecedented," said John McClain, Hall of Fame voter and writer for the Houston Chronicle. "But Savage has shown the poise, confidence and decision-making ability you want in a Hall of Famer by putting a ring on her slender, sun-kissed finger before anyone else could."

Some voters briefly wondered if it was perhaps absurd to break decades of tradition in order to induct a rookie quarterback into the Hall of Fame just because of his hot girlfriend. There is only one restriction for potential enshrinees and Savage does not meet it:

The only restriction is that a player and coach must have been retired at least five years before he can be considered.

- From the Hall of Famers Selection Process FAQ

"Sure, his numbers aren't quite there yet," explained McClain, sounding a bit out of breath. "But the sheer attractiveness of his fiancée forced our hand. All the voters quickly fell in line." McClain went on to say that there is plenty of precedent of men doing stupid things because of an attractive woman.

With a month to go until the Induction Ceremony, the Committee is scrambling to add Savage to this year's class, which was elected in February. Come August 2nd, the rookie will be wearing a yellow jacket while rubbing elbows with legends like Ray Guy, Derrick Brooks and Walter Jones.

Sources confirm that a team has already been dispatched to create a mold of Savage's head for the unveiling. With his new fiancée sure to be in attendance, Savage will soon have two bronzed busts to fondly admire.

Stick with Battle Red Onion all summer long as we update you on everything TomCat-related. They're the celebrity couple every Texans fan has dreamed of obsessing over, so we'll relentlessly hound them in public until they regret ever meeting each other. Oh, and we'll cover Tom's Hall of Fame induction, too. Probably.