Take a look at the 2014 Houston Texans' training camp roster for the offensive players. We'll consider a possible depth chart, and where these players were taken in their respective draft class.

Last week we reviewed the defense, so naturally this week we move to the other side of the field to create a visual representation of the roster and to consider the Texans' investment in draft picks over the years.  Since we have players who were drafted or signed as undrafted free agents (UDFAs) by other NFL teams prior to joining the Texans, I used a different color to represent them on the chart. 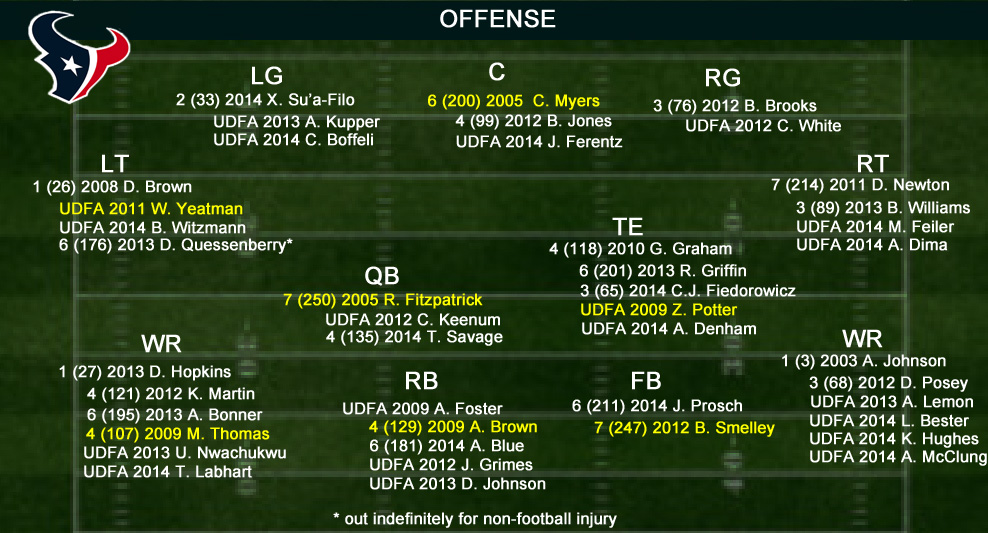 NOTE: Yellow text denotes players who were drafted, or signed as UDFAs, by other NFL teams prior to joining the Texans.

For most fans and analysts, our eyes are quickly drawn to the quarterbacks when we are considering the offense, and for good reason.  No other position on an NFL roster influences the outcome of a game more than this critical role.  So what do we have?

Ryan Fitzpatrick: A seventh round draft pick from 2005, now joining his fifth NFL team, is your new starting signal caller for the Houston Texans' 2014 season.  He has a shockingly high 93 career interceptions, and 15 career fumbles, showing an obvious red flag with respect to protecting the football.  Add to that being sacked 165 times, and I submit that my confidence is both stirred and shaken heading into this season.  Bleach martinis for everyone!

Case Keenum: Ah yes, the local favorite.  I love this kid's attitude and heart for the game of football, but he's going to have to make a massive leap forward to make a difference in winning football games.  In eight games last year, he coughed up 6 interceptions and was sacked 19 times for a loss of a whopping 201 yards!  He did produce 9 touchdowns, and some very exciting moments to thrill the crowd, but it simply wasn't enough to win.  How much of that was the system or Gary Kubiak not adapting to utilize his strengths?  How much of that was the absolutely horrendous pass-protection, and lack of a running game when Arian Foster was out?  Who knows, but Case needs to show improvement.

Tom Savage: First, congratulations on his recent engagement! He has a strong arm and good size for an NFL quarterback, but he doesn't have the resume one needs coming out of college to give any hope that he'll contribute as a rookie.  I sincerely hope he develops into a potential starter for the Texans at some point.  That's not likely to be 2014.

#80Watch has gone stone-cold without a hint of what Andre Johnson will be doing in 2014.  Will he show up at camp like nothing happened?  Will he get a new contract that meets his expectations and allows him to retire as a Texan some day?  Will he be traded or just retire?  If he does return to action for the Texans at some point, he has been missing out on critical time to meld into this new system and develop chemistry with any of the three quarterbacks.  How long will it take him to get into a solid performance-groove with the team?

Meanwhile, we can at least be excited to see DeAndre Hopkins and DeVier Posey return to action.  I'm not entirely convinced they'll see a lot of opportunities given the massive question mark at quarterback, but these two do provide the best talent on the depth chart at this point.  Alec Lemon and Alan Bonner are clawing their way out of the former regime's "red-shirt I/R" program, so I'm anxious to see how they look.  There is also a plethora of UDFA wide recievers trying to make the roster as well.

The addition of Xavier Su'a-Filo (XSF) is the most exciting thing to happen to the offense in 2014.  I'm still worried about our right tackle issues with Derek Newton named as the starter, the unknown recovery of Brennan Williams' micro-fracture procedure, and losing David Quessenberry for an unknown amount of time as he battles lymphoma.  I think the running game looks to have high potential, but the pass-protection is very suspect until proven otherwise.  The tight end group has incredible potential on paper, so let's hope that translates into the scary equalizer we'll need.

Arian Foster leads a rag-tag group of backs who may be carrying the load in 2014.  They'll need to stay healthy to succeed, and that's not something many of them have a history of so far.  Let's hope Foster stays healthy, and that Alfred Blue becomes the ultimate backup with a breakout rookie season.

Let's face it, folks.  If the Texans are going to win football games in 2014, it is going to be by having a smothering defensive unit who wins turnover battles and provides defensive scoring, along with a smash-mouth running game that doesn't rely on a "take what the defense gives them" passing attack.  My enthusiasm for the defense is easily balanced with concerns about this offensive group.

Considering the Texans' draft investment:  The defense has SIX first round draft picks and TWO second rounders in the starting line-up, while the offense only has THREE first round draft picks (assuming 'Dre returns) and ONE second rounder in the starting lineup.  Bill O'Brien has his work cut out for him in his first season with the Texans.  We'll be cheering them on either way, but let's hope he can coach these guys up to overachieve in 2014!

What are your thoughts as you consider this throng of players heading into camp and an offense led by Fitzpatrick, Foster, Brown, Myers and hopefully Andre Johnson?  Who are you looking forward to seeing in action during camp and preseason games?  Who will have a breakout season?  The floor is yours for commenting.