Lots of analysts, coaches and players have been adding their two cents regarding Jadeveon Clowney's performance and progress as a member of the Houston Texans. See what they're saying here.

I've tried to collect all the critiques and observations made about Jadeveon Clowney so far. Help a brother out and add any that I missed, particularly from players and coaches. I'll add more as I find them.

"He reminds me so much of when I was with the Cowboys, there was a young player, a rookie coming in named DeMarcus Ware," Nguyen said. "This guy’s bigger, stronger, seems like faster, than DeMarcus Ware was when he came into the league. Pretty scary."

We'll start with the most recent. Dat Nguyen, former linebacker for Bill Parcells' Dallas Cowboys says Clowney reminds him a lot of a young DeMarcus Ware. Check out his interview here. For reference, here are Ware and Clowney's Combine results. Make of them what you will. 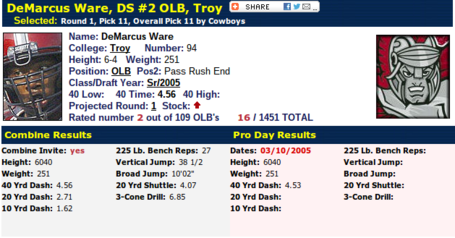 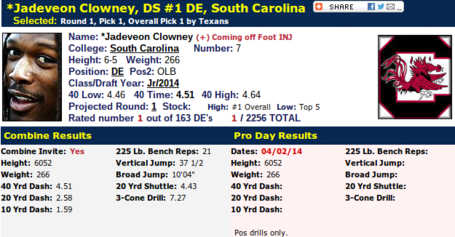 "A lot of domination. A lot of people questioned if Clowney was going to be able to stand up and play in space and play over the tight ends and do some of those drops... There's no question in my mind. When I was watching the 1-on-1 drills against the tight ends, Clowney was dominating. He drove one tight end about five, ten yards back. Another tight end, he almost picked off the ground and slammed."

That...that makes my pants tight. Of course, Clowney won't always get to engage a tight end, but they're not typically pushovers. You don't often hear stuff like this about an edge rusher.

McGinest played under Romeo Crennel's defense in the "elephant" role, which he explained here before Clowney was drafted.

"It’s a linebacker that’s a big linebacker. I played at 265. It’s a really big linebacker and the guy can play D-end too, but he’s an undersized defensive end. It’s kind of a tweener."

It's a position that requires the player to be able to put his hand on the ground and rush, and also to be able to drop back, which means understanding complicated coverages and deciphering offenses, depending on what kind of front the team is running. Different coaches use it in different ways. McGinest pointed to former Texans defensive coordinator Wade Phillips' use of Demarcus Ware and later his use of Mario Williams.

Having done it himself out of college, McGinest knows exactly what it would take for Clowney to be able to make that transition. The physical differences won't be difficult, said McGinest, rather the mental challenges are much more significant.

You can also watch his 1-on-1 interview with Clowney here.

He has the best access-to-expertise ratio out of anyone, and he's been doing a phenomenal job reporting on the team. Here are his obsverations on Clowney so far.

"If you're one of the lucky ones to have seen the first day of OLB Jadeveon Clowney (No. 90) in pads, you can always say "you were there". He's still not even 100% but the burst, the power, the ability to re-direct and the competitive fire are 100% evident. His overall game needs to be honed, even he'd admit that, but he can do things on a football field that mere mortals can't." - July 31

Clowney had the option of destroying a teammate in practice on Monday.

The conclusion to our "Title Fight" series is here at last! Read on to see who came out on top in the legendary bowl game matchup between Jadeveon Clowney and Taylor Lewan.

"One thing I wanted to see more than anything else finally happened, for at least one snap - Jadeveon Clowney pass rushing against Duane Brown. The Texans' LT kept the star rookie from the QB, but Clowney popped the big fella. It was one heck of a collision to say the least. As an aside, the team's tight ends and even some tackles are struggling with Clowney's power against the run." - July 30

"It was the first opportunity for the Houston public to see Jadeveon Clowney up close. He didn't disappoint. On his first rep during 9-on-7, he drove TE Ryan Griffin back into the ball closing down an open hole. On the second, he ran down the RB from behind. On the third, he was so fast off the ball that he nearly created another 2013 Outback Bowl moment, although he pulled off on the hit on RB Dennis Johnson (luckily) at the last minute. The burst off the ball is what we've all wanted to see and we didn't have to wait long to see it." - July 28

"I think his attitude, much like all of our guys, their attitude has been great. They've come in, they've tried to be vocal in the meeting rooms, not always right, but at least they have the confidence to try to make the calls, make the adjustments and make the corrections while we're in there. He's somebody that we're excited about because he has the natural ability, but he also has the attitude to want to learn. He doesn't think he has it all figured out."

"Heck of an athlete, he’s very hungry to learn and be a good player and I really like to see that. He comes in here, he works his tale (sic) off. He’s new, he’s fresh and it’s still early, but I think he’s going to be as good as he wants to be."