Ready for a little preseason film study? So am I. Let's take a look at the first (of several) touchdowns given up by your Houston Texans last Saturday.

I hesitated to write this out, considering it's just the first week of the preseason, but I think the secondary's performance was bad enough to take a closer look. And it's been a while since I've done one of these, so it's a good a time as any to shake the dust off. Let's jump right in. 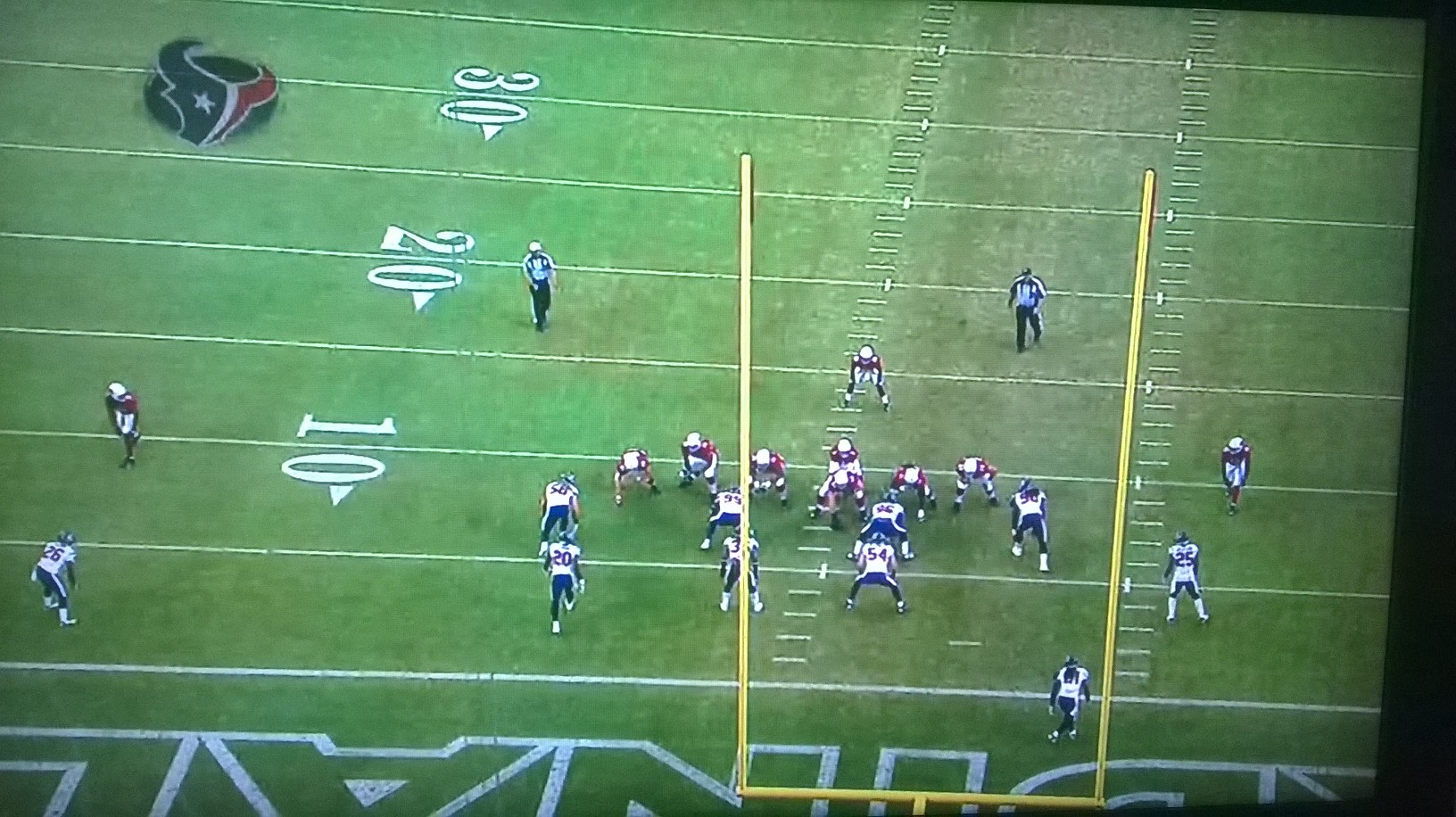 Above you see the Cardinals knocking on the Texans' end zone. The Cardinals are in their 11 personnel (1 RB, 1 TE, 3 WR) and the Texans are countering with their dime package. It's similar to what Wade Phillips liked to do, in that it features three cornerbacks and three safeties. D.J. Swearinger (36, covered up by the post) is lined up next to Mike Mohamed (54) as a safety/linebacker hybrid. Chris Clemons (20) is in man coverage over the tight end, while Kareem Jackson (25) and A.J. Bouye are off to the right.

To the left (your left), you see perennial star Larry Fitzgerald lined up across Brandon Harris (26). The cushion between them is big enough to indicate that there will be absolutely no press coverage, which is probably smart given the size (and skill) difference between the two players. Because of this, Harris is expected to perfectly mirror whatever Fitzgerald does. 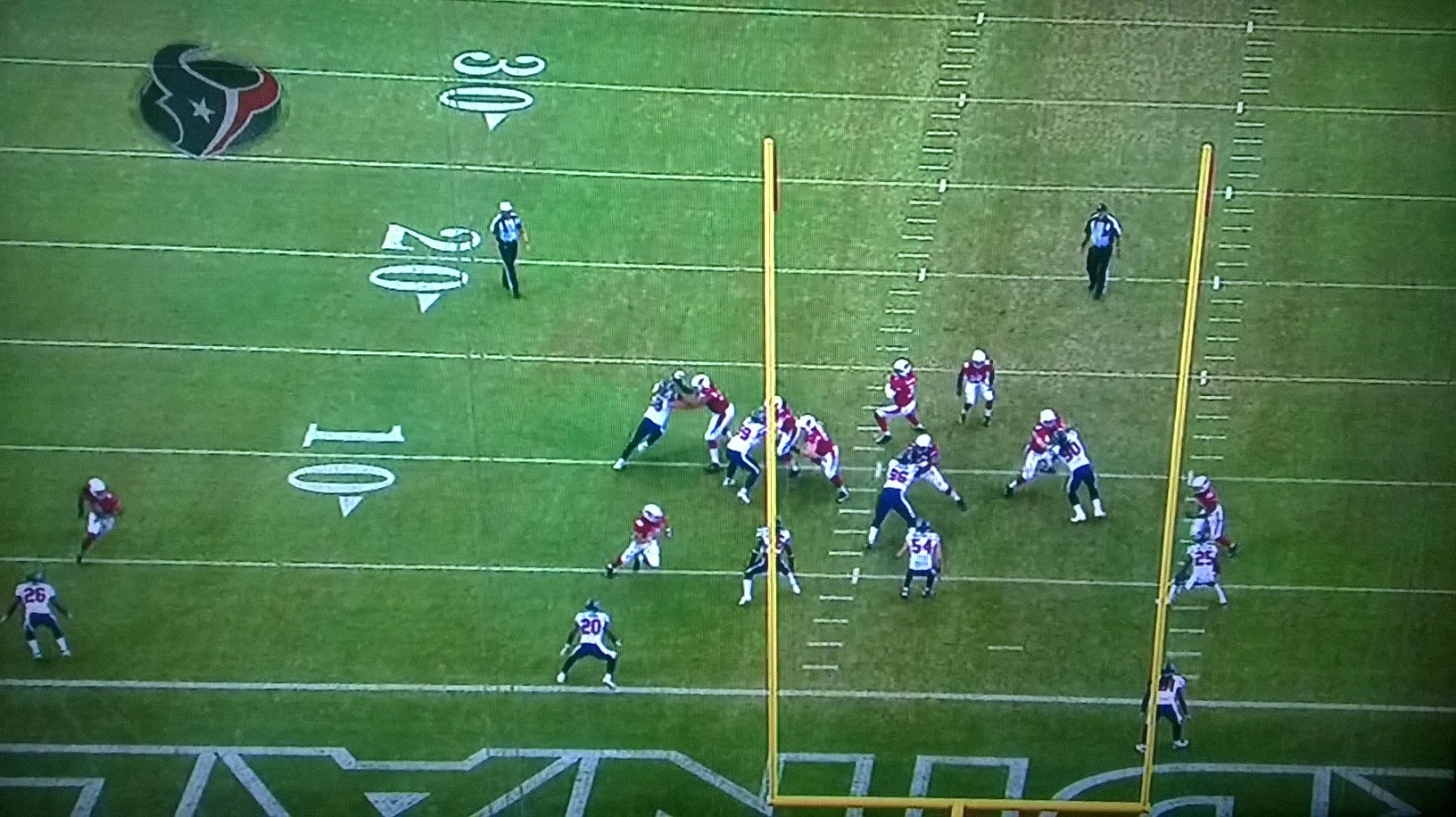 The ball is snapped, Fitzgerald cuts inside, and Carson Palmer is already looking in his direction.  Harris? He's leaning toward the sideline like he doesn't want to be there. I watched the replay several times, and I couldn't detect any trickery in Fitzgerald's route at all. No juke.  No jab step. Harris just guesses wrong and puts himself completely out of position to defend the slant route. He's three yards behind by the time the throw comes in. Too easy.

For comparison's sake, you can clearly see Clemons and Jackson mirroring their receivers' routes. 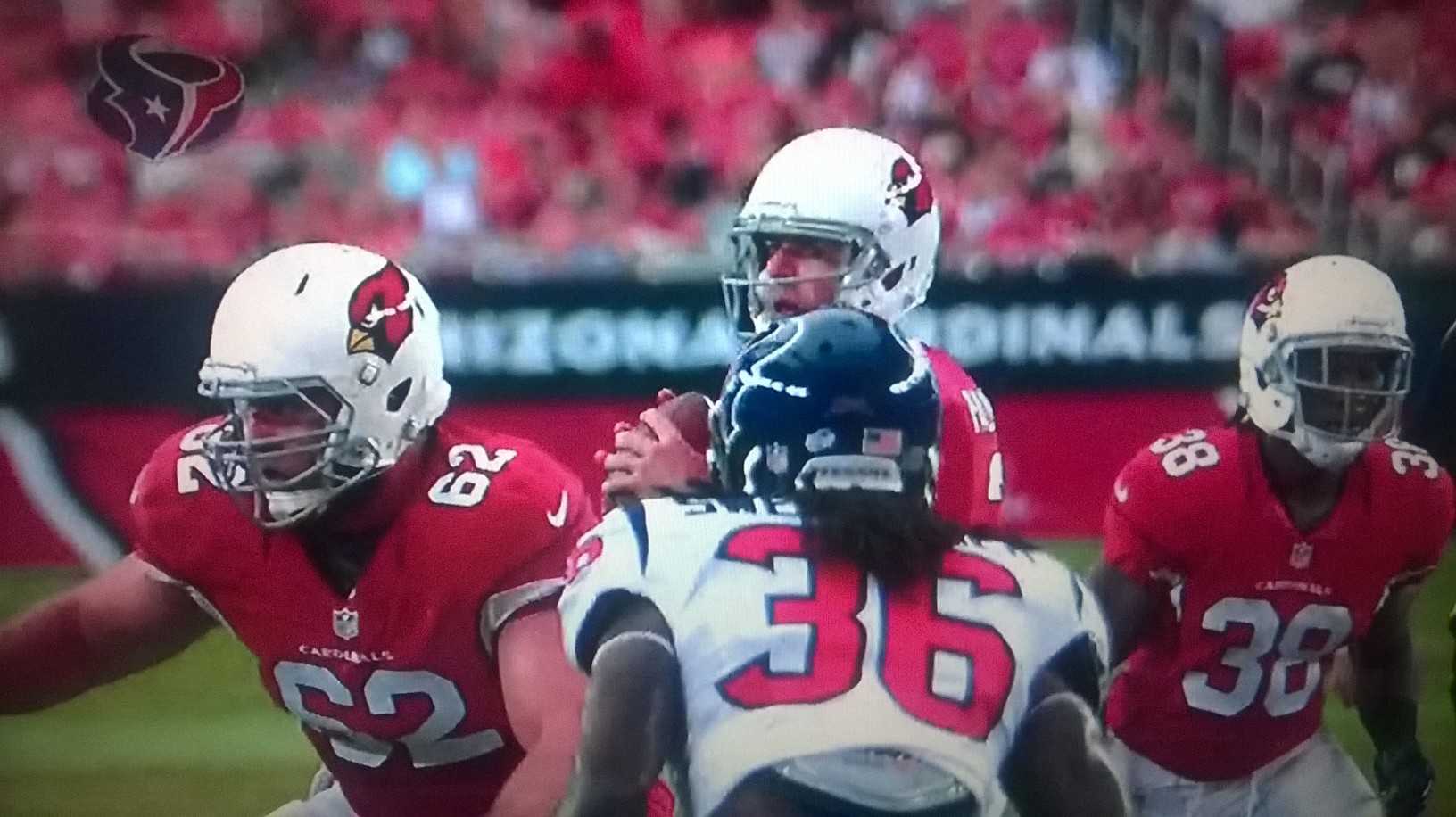 Let's switch focus to the safety who was in the area. Since the running back stayed in to pass block, Swearinger and Mohamed are free to patrol the center of the field. Above you can see Swearinger with his eyes locked on Palmer, who has his eyes locked on Fitzgerald. Thus, he starts drifting to his left, towards Fitzgerald's route. So far so good. 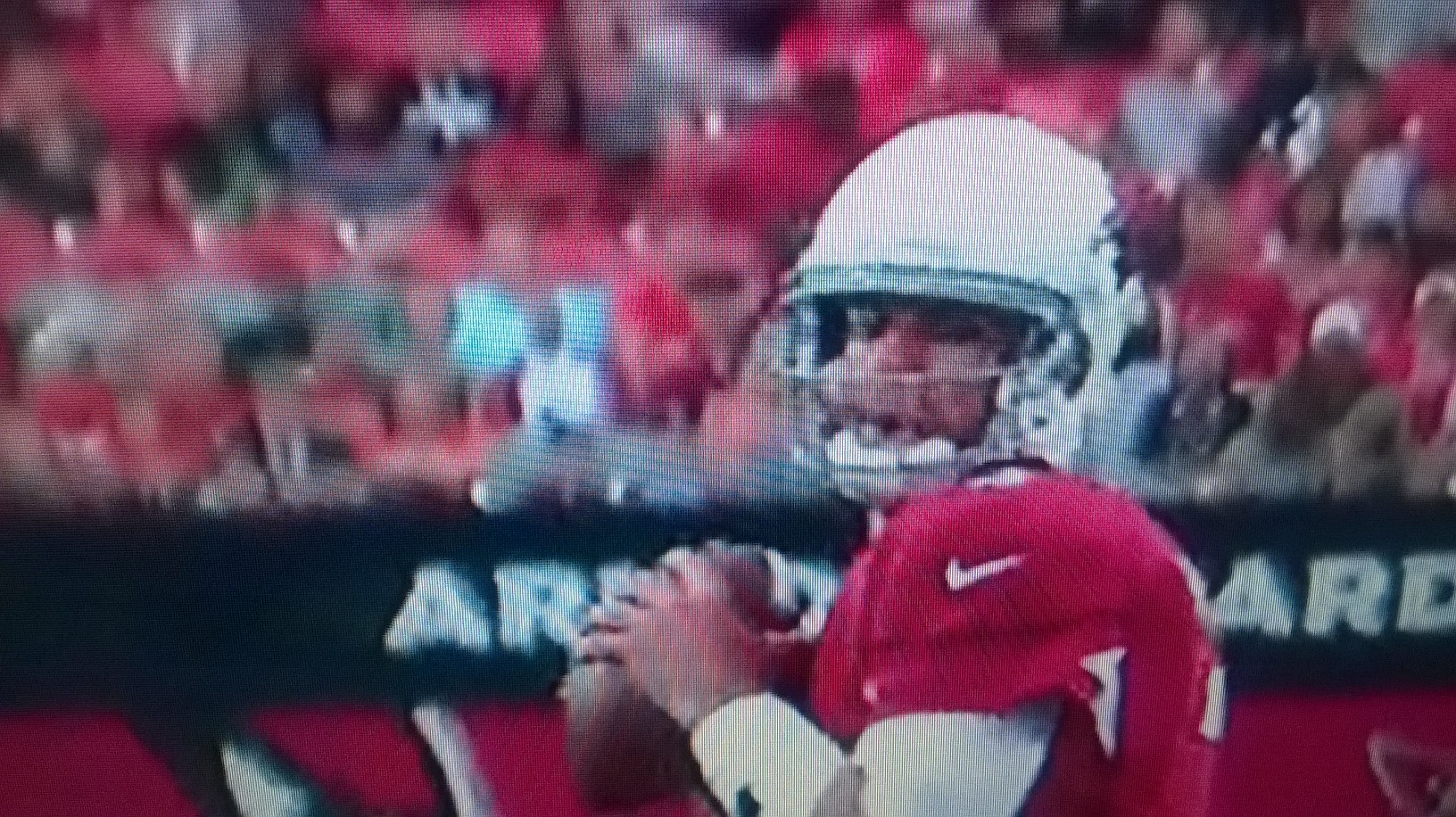 BUT WAIT! Now Palmer is looking towards the tight end! It took me forever to pause on the right frame, because it happened so quickly.  It's still hard to see it clearly, but if you still have the game on your DVR, you can verify this for yourself. It was just a glance over; Swearinger buys it and darts back towards the tight end. 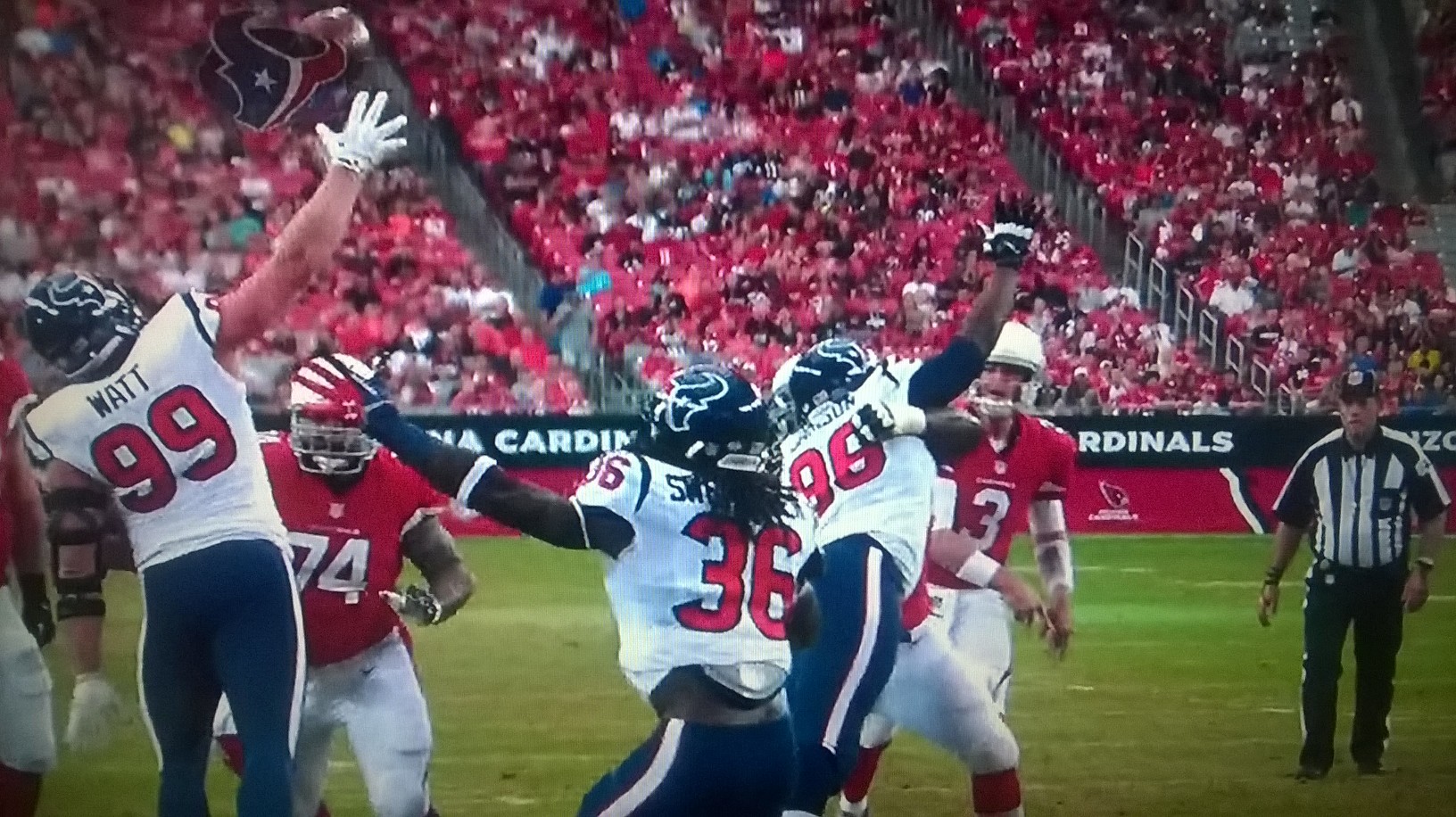 Palmer looks back over to his intended target and fires. Swearinger is completely off balance and feebly sticks his arm out, but he got completely taken out of the play by wily, ol' veteran Carson Palmer.

Of course there was no game-planning for this game, and even the best safeties get caught looking too closely at a QB's eyes, but you would hope that Swearinger had the instincts to perhaps focus a bit of extra coverage on Larry Freaking Fitzgerald.

Swagg's mistake and Harris' poor coverage led to this embarrassing screenshot via Twitter.

Tim said I'm on a limited snap count, so that's where I'll leave it. Curious to hear your thoughts as always, dear readers. Got a play you want me to look over? Feel free to send me an email (click on my name) or hit me up on Twitter.