A shot in the dark at how the Houston Texans' fantasy bell-cows will do this season.

The Houston Texans are constructed like fantasy teams.  They feature a group of stars and seemingly a lot of scrubs. It's like Rick Smith went into an auction draft, grabbed a top wide receiver or two, a top running back, and punted the quarterback position all together. A sound strategy for a fantasy owner, but is it for a real general manager? Probably not. But, who cares if we are only talking about fantasy? It's not like all of you are Texans fans and want them to do well, right?

Let's take a look at what we can expect from the Texans fantasy wise, over/under style.

Neither Ryan Fitzpatrick or Case Keenum will reach 2,500 yards passing this season. Neither will hold the starting position for the entire season. After one preseason game (yes, it's only a preseason game), Fitzpatrick looked like a dumpster fire. And, all offseason we heard Keenum was struggling with O'Brien's new system.

Another factor is Arian Foster.  When healthy, he will get 200-plus touches on the ground. That won't change in the new offense.  Expect Houston to protect its quarterback with the ground game.

Twenty-three quarterbacks last season had at least sixteen passing touchdowns. Sixteen isn't too much to ask out of a NFL starting quarterback.  It's one per start (assuming they stay healthy). The question is, do the Texans have one quarterback that should be starting in an NFL game? No, but lets assume Bill O'Brien can cobble together sixteen professional starts out of the tandem of Ryan Fitzpatrick and Case Keenum.

If you were to average Fitzpatrick and Keenum's performances from last year over 16 games, they would each have reached 16 passing touchdowns. The return of a running game from Arian Foster can only help push that number in the right direction as teams attempt to stop the run first against the Texans.

There were thirteen running backs with 1,000 rushing yards last season.  On average, just 15 runners top over a thousand yards rushing over the last five seasons. That makes the rushing yards one of the most precious stats to hold in fantasy football, especially when each team must start two running backs in a standard league. A thousand rushing yards from Arian Foster would be a victory in itself.

The risk around Foster is large.  He's a twenty-seven-year-old running back coming off a season that ended with back surgery. He has had nine months to recover from his back surgery. In the six games he was healthy last season, Foster ranked sixth among running backs in fantasy points. He may be worth a roll of the dice.

Is Foster A Wise Choice For Fantasy Football?

Foster will be the focal point of the Texans' offense, just like he was under the previous administration. Bill O'Brien hasn't had enough time to pick the groceries to do his own cooking just yet. Sure, the window dressing may be different with more two tight end sets, but the Texans are still run-first.

Foster has averaged fifteen total touchdowns over the three seasons before 2013, and that was with Ben Tate taking carries. Tate is now partying with Johnny Football.  I don't see Jonathan Grimes or Alfred Blue taking Foster's carries at the goalline.

Last year, Andre Johnson picked up 1,407 receiving yards even with a shell of two quarterbacks, no running game, a rookie wide receiver starring opposite him, and almost no production from any other receiving position. It's not even a question that Johnson is the greatest Texans player of all time and will be the first Texan to wear the gold jacket.

Last year, the Texans were forced in many games to throw the ball more often than they would have liked. The talented rookie starting opposite him has another year under his belt, and the rest of the team for now is healthy. Johnson will still get his, but the Texans will spread the ball around. That will prevent Johnson from getting lopsided numbers.

It surprises me to find out that Johnson has never had a season with 10 touchdown catches. It speaks to the focus that defenses have put on Johnson, as well as the offensive game plan to run the ball at the goalline. Now, defenses have to deal with Arian Foster and DeAndre Hopkins as legitimate weapons. For that reason, the Texans' quarterbacks will give Johnson an extra jump ball or two this year. 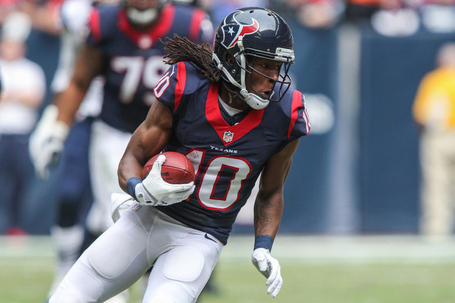 Speaking of the now second-year player out of Clemson, DeAndre Hopkins probably had the quietest 800 yards any rookie has ever had in the National Football League. Another year of experience can only help. Add the fact that Bill O'Brien understands the concept of a slot receiver to open up things for Johnson and Hopkins on the outside, and Nuk should flourish this season..

The Texans' tight end job was held down by Owen Daniels for eight seasons. For many of those seasons, he was a top-ten offensive tight end when he could stay on the field. Times have changed. Ryan Griffin showed flashes last season as a tall, athletic pass catcher, but Bill O'Brien will value blocking as much as pass-catching. The tight end position will be a revolving door to fit the situation of the play-calling, which should prevent one guy from standing out in fantasy.

What are your over/unders this season? Would you risk your season on Arian Foster?