Brett Kollmann goes through Houston's recently released depth chart with a fine-toothed comb. See what it all means for the Texans as they prepare to kick off the preseason this weekend.

As seen earlier on BRB, the Texans have released the first official depth chart of the season in advance of the preseason opener this Saturday against the Cardinals (image from CSN Houston). 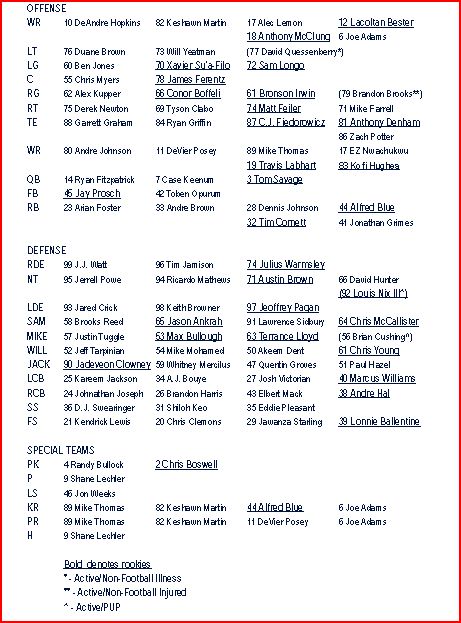 Perhaps the biggest surprise on the entire chart is Jadeveon Clowney taking Whitney Mercilus’ starting spot at Jack backer – the team’s term for the weak side rush linebacker - after just ten days of practice (while being injured, no less). Brooks Reed has also gone back to his old role at strong side outside linebacker rather than staying inside, which is intriguing considering the continued absence of Brian Cushing while he recovers from last season’s knee injury. The dynamic duo of Jeff Tarpinian and Justin Tuggle have been given the starting nod over Mike Mohamed and Max Bullough, both of whom have made some waves thus far in camp.

On the defensive line, J.J. Watt will be joined by third year defensive end Jared Crick and nose tackle extraordinaire Jerrell Powe in the starting lineup. Crick and Powe have been consistently praised this offseason for their run-stopping abilities, so it makes sense to see both of them in on early downs while Watt and Clowney presumably focus on slaughtering quarterbacks. Speaking of Watt, he is listed as the right defensive end, a departure from his typical alignment on the left side during his time under Wade Phillips. This new alignment should put him up against left tackles and left guards for the majority of the game, which means that against right-handed quarterbacks (which most quarterbacks are) Watt will be coming from the blind side. If the left side of the offense happens to also be the "weak side" (without a tight end), Clowney and Watt should be theoretically lining up right next to each other.

Good luck blocking that on third and long. Seriously.

In the secondary, Johnathan Joseph and Kareem Jackson return as starters while D.J. Swearinger and Kendrick Lewis man the starting safety spots. From the looks of the depth chart, either A.J. Bouye or Brandon Harris will be the team’s nickel cornerback. My money is on Bouye. BRB favorite Andre Hal is buried all the way on the fourth string.

On offense, Andre Johnson, DeAndre Hopkins, and DeVier Posey seem to still be the team’s top three receiving options. Slot receiver is up in the air between Keshawn Martin, Mike Thomas, Travis Labhart, and EZ Nwachukwu. I am willing to bet that battle will not be resolved until the team is almost ready to take the field "for real" in September. Jay Prosch has already earned the starting fullback job despite having a giant club cast on his arm, and Arian Foster retains his starter status (duh) after battling some bumps and bruises early in camp. There is no word yet on whether Foster will actually play this weekend; I personally do not expect him to suit up until the team is confident he is absolutely ready to go.

Your starting offensive line consists of Duane Brown, Ben Jones, Chris Myers, Alex Kupper, and Derek Newton. Rookie guard Xavier Su’a-Filo has had some well-documented inconsistency so far in camp, particularly in pass protection, so it makes sense to keep him on the second team while he continues to develop. Kupper is being given an opportunity to roll with the ones while Brandon Brooks continues his recovery from a mystery injury he sustained prior to camp. Hopefully Kupper takes advantage of his moment in the spotlight, lest Calais Campbell make a fool of him on live television.

Tight end has shaken out as expected with Garrett Graham, Ryan Griffin, and C.J. Fiedorowicz manning the top three spots. Fiedorowicz has reportedly been making a strong play for the starting inline tight end spot, so keep an eye on him this weekend. If The Polish Hat's receiving skills catch up with his blocking ability anytime soon, he should easily be the starter this season as the "Y" tight end while Graham becomes O'Brien's "U" tight end (the Aaron Hernandez role).

Last but not least, Case Keenum is still the second string quarterback (yikes). Tom Savage will be given every opportunity to fight for the primary backup role during preseason. As of right now, I would not count on any quarterback other than Ryan Fitzpatrick Playing this season, barring injury. Please, for the love of Durga, let there be no injuries to Ryan Fitzpatrick. He may not be Aaron Rodgers, but he sure as hell isn’t Case Keenum either.

What are your reactions to the Texans' depth chart after taking some time to digest it, BRB? Happy? Sad? Nervous enthusiasm? Sound off below.