Are The People In Charge Of The Field At NRG Stadium Finally Considering A Change?

With the latest non-contact injury to Jadeveon Clowney, renewed focus has been directed toward the field at NRG Stadium as a potential contributing factor. Take a look at some possibilities, no matter how extreme, to improve the situation.

Share All sharing options for: Are The People In Charge Of The Field At NRG Stadium Finally Considering A Change?

The concept of being able to play NFL football on natural grass is a rare luxury in today's stadiums, but many players admit to preferring natural grass over the various artificial surfaces used by many facilities.  The design being deployed at NRG Stadium is difficult to manage and might just be contributing to unnecessary non-contact injuries due to inconsistency in the playing surface.

There are 1,400 pallets of 8' x 8' grass sections that form the football field at NRG Stadium.  This design creates a patchwork field that features roughly 5,000 seams.  The firmness of each pallet can vary greatly.  Additionally, the edges and corners can separate, which creates a potential risk to players. 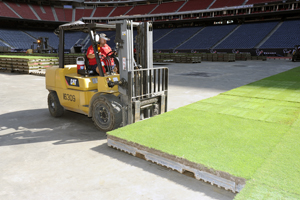 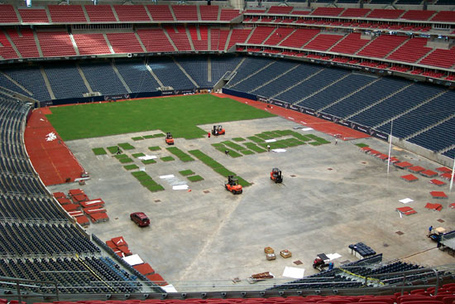 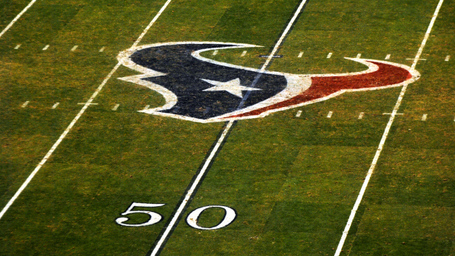 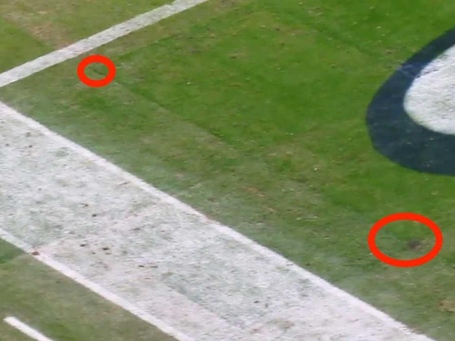 If you haven't seen this before, here is a time-lapse video of how they install the pallets of grass at NRG Stadium.

NRG Stadium, originally branded Reliant Stadium, broke ground March 9, 2000 in order to be ready for the Houston Texans' inaugural season in 2002.  It was a game-changer, as it was the first facility in the NFL to have a retractable roof.  Yet after just 14 years of multipurpose service, it may already be obsolete.

While I actually like the design of the stadium, I can personally attest to several flaws that make various events less than enjoyable at times.  First and foremost is the fact that the retractable roof nearly always remains closed due to relatively few times that Houston weather is tolerable for an open-roof game.  Even when the weather warrants opening the roof, the Texans almost always choose to keep it closed.  Other events, like concerts and the Houston Livestock Show and Rodeo, leave the roof closed as well.

Another issue:  The flexible design of the roof lends itself to significant leaking when it rains.  Some seats in various sections get dumped on by streams of water.  So what's the point of having a retractable roof that is rarely open?

There are constant issues with the escalators and elevators functioning correctly, which makes it challenging to move a lot of people before, during and after events.  This is especially true for anyone needing special assistance.  In my opinion, these are not positioned well within the complex and were very poorly thought out.

Now let's focus on the big elephant in the room and the reason for this post--the playing surface used by the Texans.  We recently reported that the field may have contributed to Clowney's injury, and discussed previous criticism from Patriots' coach Bill Belichick and others who feel it is one of the worst fields in the league.

I believe Albert Breer was the first person to pass along D.J. Swearinger's assertion that Clowney told him the field may have played a role in his meniscus injury.

"He told me on the field when it happened, he was just like, 'Bro, I just jumped, came down and hit one of the holes on the field,' " said Swearinger. "There are a few holes in the grass, so he said he thought he stepped on one of those holes and got hurt. So I told him to try and walk it off, see if he could go. He went in the next play and couldn't go, so I told him to go to the sideline and see what's up with it. And he went over to the sideline, and I guess that's when they told him (he had to stay out)."

Will Grubb of CBS Houston Sports Radio 610 also reported on the story surrounding the field at NRG, including this exchange:

"I definitely think they need to do something about it. We like the grass, but I think there definitely could be a better way to put the grass down," D.J. Swearinger told ESPN Radio. "When we go out there for walkthrough, somedays we may see a hole and we ask coach ‘What’s going on today? Can they fix this?'"

We actually said that the day before (the injury). If somebody was running right here and (they) plant, their ACL or MCL is gone just because of how deep the holes are," Swearinger said.

Players are aware of the potential for injury with NRG’s field. So much so, Swearinger checks his footing before each play.

"I was just checking my feet before I even get down in my stance," Swearinger continued. "Just to make sure I don’t have a gap or a hole next to my feet."

The condition of the Texans field has been an on-air topic on multiple occasion. Al Michaels and Cris Collinsworth have commented about it on Sunday night football. Tony Dungy, the former Colts head coach who used to have his team play on the surface, has also commented publicly on it before.

I sent a note over to the Texans' "fan feedback" site:

What can you do about the grass at NRG and the potentially dangerous seams?  Is "Field Turf" an option?  Perhaps retrofit NRG with a slide-out single tray like Arizona has?  Yeah, that would be a massive expense, but having our star players get injured is unacceptable.

I'm glad it is being evaluated.  I should have no doubts that the Texans' organization is looking at every possible way to ensure a safe playing environment for the players and hopefully Clowney's injury has in fact given renewed urgency to the matter.  We all know that Bob McNair is a smart businessman and will leverage the best investments for a high-quality NFL program in Houston.

So what can be done, no matter how extreme?

1.  Do nothing different, but perhaps enhance and improve the current grass pallet scenario to minimize the inconsistencies.  I'm not convinced this can be done.

2.  Abandon the grass pallets and install the same "FieldTurf" used by many of the NFL and NCAA fields.  This is the most likely scenario if they move away from grass, due to being the most cost efficient.  From Wikipedia:

FieldTurf is a brand of artificial turf playing surface.

FieldTurf is made from washed silica sand and rounded cryogenic rubber. Each square foot of turf contains approximately seven pounds of sand and three pounds of cryogenic rubber. FieldTurf does not use shock absorbency pads below its multi-layered infill. FieldTurf offers a number of different polyethylene fibers. The backing of the turf is a combination of woven and non-woven polypropylene. These materials are permeable and allow water to drain through the backing itself.

A FieldTurf installation sized for American football cost about $900,000 (US) in 2008, but is estimated (by FieldTurf) to save about $47,500 per year in maintenance. The field is warrantied for eight years and should last for ten, according to FieldTurf.

3.  Retrofit the stadium to accommodate an all-grass tray like they use for University of Phoenix Stadium in Arizona.  This would be a massive undertaking and likely so expensive that you may as well just rebuild instead.

4. This leads us to the other option:  Demolish the Astrodome and NRG Stadium.  Build a new stadium complex completely.  Yeah, this is highly unlikely, but it shouldn't be completely out of consideration if Houston wants to keep up with the competitive nature of other cities' venues.

This article touches on the short life of NFL stadiums:

The NFL is in the midst of a building boom, with ten new stadiums in the last 12 years, and two more under construction. The median age of the stadiums replaced was only 31 years. It used to be stadiums would be nearly 50 years old before the wrecking ball swung.

The reason is simple: New stadiums maximize revenue in a way old stadiums never did.

NFL teams share most of their revenue, including most ticket sales and all broadcast rights. But most of the other money they make in the stadium -- from luxury boxes, advertising and concessions -- they can keep themselves.

"If you want to keep up with the Jerry Joneses, a 20-year-old stadium isn't going to cut it," said Marc Ganis, a sports industry consultant who has worked on numerous stadium deals, referring to the Dallas Cowboys owner who opened a billion dollar stadium in 2009.

Washington Redskins owner Daniel Snyder recently said his team is already starting to look for a replacement for FedEx Field. It opened in 1997. "We love FedEx Field, it's a great place to feature our home games, but it's 17 years old now. So I think it's time for us to start looking," he said in a television interview.

After 14 years, NRG Stadium has likely brought in more than double the revenue as construction costs by being a successful multiple-use event complex.  If stadiums are being considered for replacement in the 17 to 20 year range, then NRG isn't that far off the mark.

In the highly unlikely case the Texans were to design one similar to Arizona's, I took the liberty of photoshopping what that might look like: 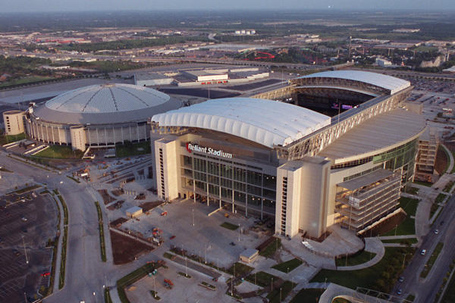 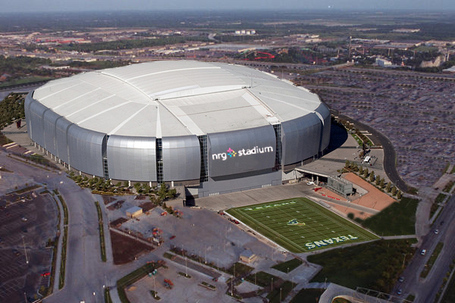 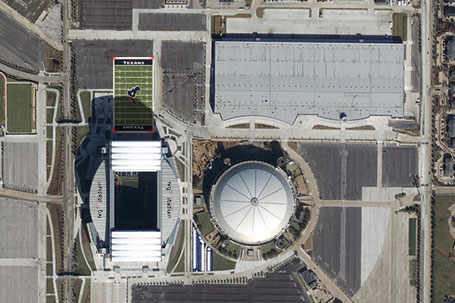 While I love the concept of a single tray of natural grass that can be brought out for maintenance and to accommodate other events, I'm not sure I'm sold on this exterior appearance.  Certainly Houston can do better with the exterior design if they attempted a rebuild, and they could obviously do something really cool and nostalgic with the original Astrodome footprint.

They could probably do this for around $500M, which is still half to one third of what the latest NFL stadiums cost.  If this is a possibility at 20 years of age anyway, why not go for it now while Houston has a robust economy and corporate support for a new venue?  Well, for one thing, Super Bowl LI is scheduled to be played in Houston in February of 2017.  That wouldn't leave enough time to complete demolition and build a new stadium, unless they pull off an aggressive project after this season.  Perhaps we use FieldTurf for the next couple of seasons and build a new stadium after the Super Bowl.  Either way, I just hope they do something to get rid of those awful grass pallets.

What are your thoughts?  Is this all just a non-issue?  Should the team move toward FieldTurf?  Should Houston consider a bigger-picture approach to a new and better complex?  The floor is yours for commenting.