Projecting DeAndre Hopkins: What Should Texans Fans Expect From Nuk In The Years To Come?

Just how much of a star should you expect the young playmaker to be? John Monahan of Battle Red Blog looks to history and performs some comparative analysis and projections for the Texans' wide receiver.

Share All sharing options for: Projecting DeAndre Hopkins: What Should Texans Fans Expect From Nuk In The Years To Come?

Since being drafted in the first round of the 2013 NFL Draft, DeAndre Hopkins has been the subject of much excitement for Texans fans. That excitement has been ratcheted up a notch or two following a four catch, 89 yard, one touchdown performance to kick off his sophomore season. There's no doubt he's a star in the making, and I'm here to give you an idea of just how much of a star you should expect him to be.

For this article, we'll be looking at and comparing DeAndre Hopkins to some of the more successful receivers of the last 10 or 12 years who fall in Nuk's height and weight range. The reason for doing it this way is that it stands to reason that guys in the same height/weight range of Nuk possess many of the same qualities he does, and Nuk will probably have to play the position similar to the way these guys have played it in order to be productive. And with that, the list:

As you can see, all these guys are in the 6'0"-6'1" range and roughly the same weight, with the exception of Chad Johnson, who I'm guessing played at a higher weight than 188. These aren't the Calvin Johnsons and Julio Joneses of the world who are capable of beating guys with speed and size alone. This group of players have to be master technicians and savvy route runners to be successful.

How did they do as rookies?

Let's start by looking at how these guys, minus Hopkins (for now), performed as rookies.

With the exception of Anquan, whose rookie season was freakishly and historically amazing, they all put up pretty pedestrian numbers, typical of a third or fourth string receiver. At this point, I'm sure you're asking yourself how Nuk compares.  I'll tell you now that he compares very favorably.

In the overall group of five, Hopkins and Anquan are the only ones who were 16 game starters, caught more than 30 passes, and surpassed 450 yards as rookies. You can certainly debate what these superior rookie year stats mean. You might be asking, for example, whether Hopkins' stats are that much better because he's that far ahead of schedule, or whether this a case of correlation versus causation, perhaps thinking Nuk is benefiting from coming up in a more pass-happy league.

For my money, it's a bit of both. Even players like DeAndre, who didn't play in a pro-style system in college, seem to be coming out of college far more pro-ready than the players who were coming out in the early to mid-00s.  At the same time, it's hard to discount the boost playing in today's NFL gives to a receiver's stats. All that being said, what you can't debate is that Nuk is a star in the making.  That leads to the next question I'm going to tackle, which is...

What should we expect from DeAndre Hopkins in the near future?

To answer that question, I've put together a couple of plots which show how these players' stats progressed (statistically, anyway) in their first 5 years in the league. 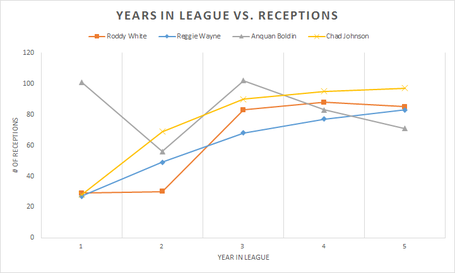 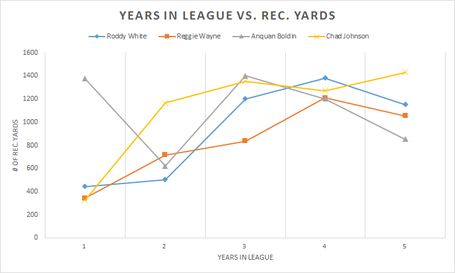 As we can see here, these players, with the exception of Boldin, who was hampered by injuries and realistically had nowhere to go but down following an incredible rookie season, all improved drastically between years one and three, some more immediately than others.  They then held course from years three to five. Between years one and three, they added approximately 40 receptions and 600 yards to their stats. Such an improvement would put Nuk in the neighborhood of 90 catches and around 1,400 yards, which would make him one of the top 10-15 receivers in the NFL.

Obviously, he's only in his second season, however, and it's much harder to pin down a good approximation based on this data. We've got two guys in Roddy White and Reggie Wayne who didn't quite get a hold of things until Year 3 (more like Year 4 in Reggie's case).  We've got Chad Johnson, who went from 28 catches and 300 yards to almost 70 catches and 1,200 yards in a single offseason.  Then we've got Anquan Boldin, who is useless for this one since he only started 9 games his second season due to injury. If I had to make an educated guess, I'd put Nuk more toward the Wayne/White model of improvement, which would mean an improvement of about 20 catches and 200-300 yards between year one and two. Such an improvement puts him at about 70 catches and 1,000-1,100 yards this season.

Note that I elected not to include plots for touchdowns, starts, or yards per catch. Touchdowns on account of it being a very fluky, scheme-driven stat (see the 2012 season when Andre Johnson had 8 fewer touchdowns than James Jones, but about twice as many yards, for proof of that), starts due to the fact that all four of these guys were full-time starters by Year Three and the fact that Hopkins already is a full-time starter so it's a bit of a useless projection, and YPC because it's somewhat redundant with the data I am showing.

What to take away from this?

Now the question is what to take away from all this. Personally, I think the Year Three projections are a little high for Hopkins.  You've got to figure you'll still have Andre Johnson and Arian Foster taking away touches, and you'll probably be dealing with a rookie QB, which could drive his numbers down a bit as well. Furthermore, Nuk's rookie year numbers being so much better than those of the players I compared him to are likely just as much a result of the pass-happy era he's coming up in as they are him being more pro-ready than those guys were. If so, based on the way I did this, the projections would probably be off by about 150-200 yards (guesstimate), making him more of a 1,200-1,300 yard receiver than a 1,300-1,400 yard receiver.

All that being said, in three or four years with a (hopefully) stable situation at QB and in a more pass-oriented (i.e., Foster-less) offense I can definitely see Nuk putting together a 90 catch, 1,300-1,400 yard season or two at his peak, and otherwise being a 1,200-1,300 yard receiver. That would certainly make him a very worthy heir to Andre's throne.