A whole lot of things went right for the Texans yesterday in their win over Oakland. Let's have a closer look at what Bill O'Brien is doing and why it's working.

Who has time to wait for the All-22 to come out on Wednesday? Not me. I found some plays worth reviewing right away. Here we go.

J.J. Watt does the impossible, makes himself even more useful

One of the coolest things I've ever seen watching the Texans occurred yesterday against the Oakland Raiders. Defensive phenom and paragon of humanity J.J. Watt lined up at TE in the Texans' heavy, goal line formation. Like the CBS broadcasters, I didn't realize Watt was on the field until he caught the touchdown. It probably doesn't deserve to be, but it was a monumental moment in the team's history. The best defensive player the team has ever had has now made himself useful on offense.

"It just shows how many ways we can use him, not just defensively," said Andre Johnson of Watt. "He’s a heck of an athlete; he’s always catching balls with us on the Jugs. I thought they would be looking for him but they left him open. It was great to see him get his first touchdown... well, second touchdown."

Johnson is referring, of course, to Watt's interception returned for a touchdown against the Cincinnati Bengals.

After Arian Foster's vintage 40-yard run (more on that later) got the offense to Oakland's one-yard-line, the Texans called in Watt to play left TE (circled above) after their initial goal line run got stuffed for a loss. The play's outlined above.

Ryan Fitzpatrick takes the snap and half-way fakes a hand-off to Foster, who's already on his way to the sideline. Fullback Jay Prosch perfectly cuts down a defender, giving Fitzpatrick enough time to hit an astoundingly open Watt in the back of the end zone. Foster, who had already amounted 66 total yards on the first drive alone, drew the attention of two Raiders defenders. Garrett Graham at the bottom of the screen drew attention from two other defenders.

The Raiders made the mistake of ignoring Watt, and now he'll have to be accounted for every time O'Brien decides to trot him out there. He'll either be a dangerous goal-line weapon, or the ultimate decoy due to his name recognition alone. Either way, scoring touchdowns should be much easier going forward with Watt out there.

"I thought they were teasing me when they were first talking about it," said Watt. "But we put it in and it works in a game. To have a chance to score a touchdown in an NFL game on the offensive side of the ball is something that’s pretty darn cool for me."

Pretty darn cool for us, too.

Now we'll take a look at the end of the Texans' second touchdown drive. Lest you think O'Brien is drawing Kubiak-style draw plays all willy-nilly, Foster's first touchdown of the year was actually a power run featuring Ben Jones as the pulling guard.

Starting from the bottom, we have Damaris Johnson and DeAndre Hopkins doing a decent job blocking the defensive backs in front of them. At the end of the offensive line is TE Ryan Griffin, who must down block the defensive end in front of him. 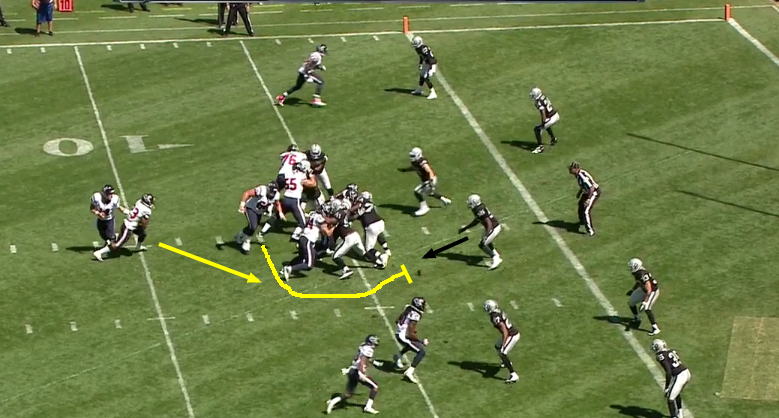 The ball is snapped and Griffin drives the DE back, creating a perfect lane for Jones to pull around. You can see that the Raider defenders are nearly all flat-footed. This is the benefit of running out of the shotgun formation; defenders are naturally expecting a pass, and there are less linebackers to deal with.

Circled above is the beautiful running lane that has been created. Jones engages the playside linebacker and stonewalls him, while Griffin (84) nearly finishes his block in the end zone. Foster breaks one or two arm tackles for the score.

As I type this, Griffin is probably getting an earful for the three holding penalties called on him, but hopefully he got some slack for his superb work on this play.

As Matt Weston expertly demonstrated here, the Houston Texans are still very much a zone-running team, but O'Brien is mixing in new ways of executing it, particularly out of the shotgun. Above is Foster's 40-yard run on the Texans' first drive.

Chris Myers and Jones will double team the DT briefly before Jones (at left guard) moves on to mow down the weakside linebacker. The same goes for Derek Newton and Brandon Brooks on the opposite side. It'll look like chaos at first but settle down into that perfect synchronous execution we've grown to love out of the Texans' offensive line.

Initially, there's a very obvious running lane for Foster to dart through, despite all the chaos. Myers is now solo-blocking the playside defensive tackle, who is desperately moving to plug the lane (marked in yellow). 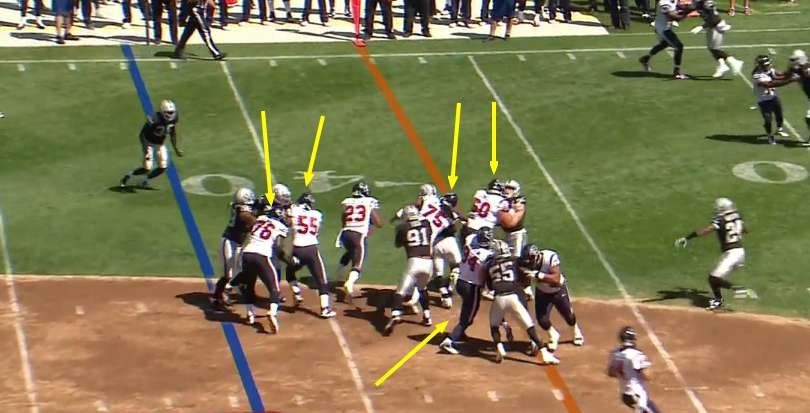 Ah, there's that beautiful, run-blocking synchrony. Myers (55) guides his man through the initial running lane, allowing the ever-patient and hawk-eyed Foster to find a new one behind him.

Meanwhile, Ben Jones begins demolishing (seriously, Jones flattens him) the playside linebacker, paving the way for Foster to weave through and outrun the Raiders' secondary. Another shout-out to Ryan Griffin (bottom arrow) who's already driven his man five yards.

- Many times when a team goes 2-14, we see a huge turnover of the roster. Veterans get cut, rookies and young players are given a chance, etc. But that didn't happen when Bill O'Brien came to power. He took the pieces he was given, recognized the talent there and, thus far, has made them work in new ways.

- The offensive line had its best showing in a full calendar year.

- The only thing that will slow Arian Foster down is injury.

Curious to hear your thoughts on this, as always. Happy Monday. 2-0 feels good, huh?